I met Nigel Clarke for the first time a few years ago at the top of the Shard when we were both there to interview Hugh Bonneville and the filmmakers behind Paddington 2. He is certainly not a person who goes unnoticed with his unique looks and bubbly personality. Nigel is not just a super talented presenter but also very down to earth guy and an amazing father to his two children. I caught up with him to discuss his career so far and plans for the future. He can currently be seen on Cbeebies as the co-presenter of The Baby Club alongside Giovanna Fletcher. 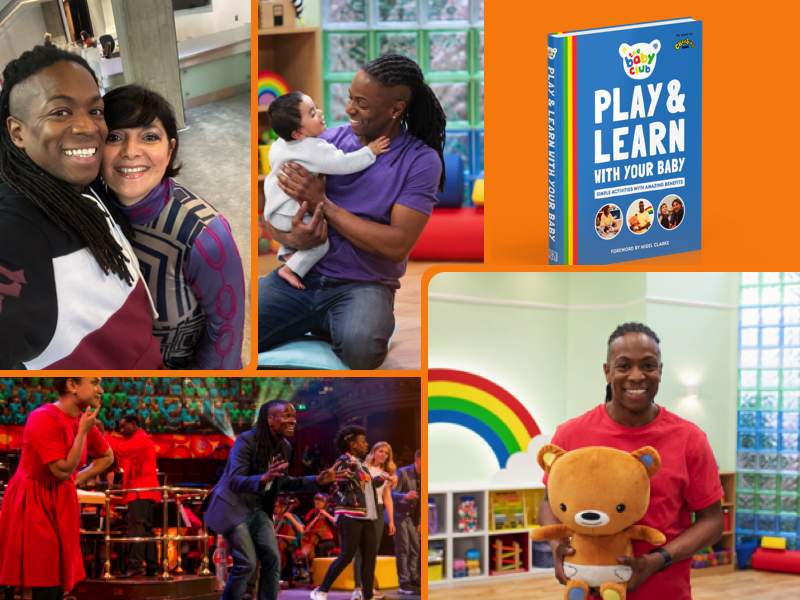 Q: Your new project is The Baby Club and you’ve got a book there, right there, that is also from the CBeebies‘s program. Tell me about this.

Nigel Clarke (NC): Last year we aired The Baby Club for the first time. It’s a show that’s aimed at people who’ve just had a baby and might not know how much play can help their babies’ development. We’re trying to encourage people to learn together with their babies. Now off the back of that, we’ve got a lovely book published by DK that supports the series. It’s called Play & Learn With Your Baby – Simple Activities with Amazing Benefits and we love it. I wrote the foreword for it and am proud to have been asked. It’s been a few years since my kids were babies, but I have to confess that when they were little, I didn’t really tap into baby clubs. I lived in a family bubble and assumed that clubs weren’t that beneficial. How wrong I was! It’s only now, having led and studied baby groups, that I appreciate their enormous benefits.

Like the show, Play and Learn With Your Baby is for babies aged 6-18 months, and gives parents and carers ideas for interactive games, activities and songs to enjoy with their child. 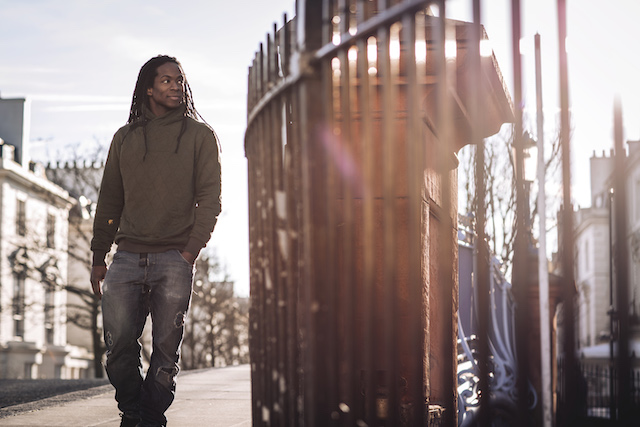 Using everyday objects featured in the show, songs to sing together and tips on every page, this must-have parenting book is fun, accessible and easy to follow. It also helps build confidence by giving parents and carers lots of great ideas to help their baby develop. There is also advice on how you can modify each activity, as your baby gets older.

What makes this book unique is that it includes the psychology and child development theory that underpins each activity, and shows you how to apply the same principles to almost everything you do with your baby.

There is no need for expensive toys when trying the different activities, everyday items such as a rolled-up sock, an empty box, or a stick from the park will do.  A cardboard box is great for pretend play, whether you turn it into a car or make an obstacle course for your baby to crawl through, tying bits of material to a stick or a toothbrush to turn it into a magic wand is also a great way to spark their imagination.

Q: The book includes a lot of songs. Is that’s what you do during the show as well?

NC:  In the show we sing a hello song where we get to know the baby’s names. We have a ‘what’s in the bag’ section, a bubble section, a story time, we do a song and sort of dancing time. They’re all set parts of the show. What a lot of people don’t realise is that while that’s happening, you’re actually teaching and educating your baby, and this book explains some of that. An audiobook will also accompany the print title with bonus content including me performing songs from the show.

Q: Obviously you like babies because you’ve got two your own, although not babies anymore. What kind of dad are you? You seem so cool. Are you as cool as we imagine?

NC: My babies are big now: 12 and 10. I’m very involved in their parenting and I’m a hands-on dad. I enjoy it. I like spending time with them. I like being involved in their life. So, that’s led to the way it is. I want to give them opportunities, I want to share the things I’ve learnt. We spend a lot of time together, we do everything together. I take them to whatever clubs and things they’re doing, whether it’s gymnastics or dance or singing. And we just have a really good relationship where we communicate a lot. 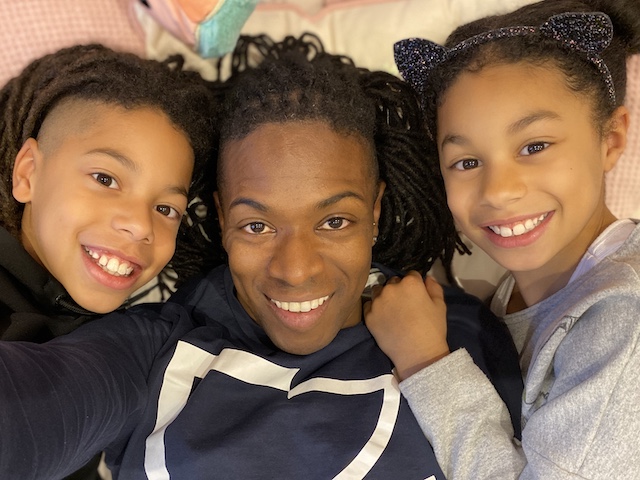 Q: You’ve also launched recently the Dadvengers project. What is it?

NC:                Off the back of The Baby Club and my parenting experiences, I realised that there are a lot more dads in 2020 getting involved like I am with my kids, and there’s a much higher number of dads getting involved than maybe in the 70s. But, reflecting that, there isn’t as much support for them, and sometimes they want a place to go to say what do I do with my kids? Am I doing this right? They just want some advice and a place where they can communicate with other dads. We’ve got lots of mummy bloggers, but we don’t have as many resources for dads. So ‘Dadvengers’ is a sort of online community that I’m starting, and a resource where we’re going to champion and help dads specifically. That said, we do want mums involved as well. We want mums helping the dads, because you guys know what you’re doing. Your help with dads is essential.

Q: Looking back at your career so far, there’s a lot of variety in there. Talk to me about your career highlights.

NC:                I got into TV presenting and Stomp at the same time, back in 1999. So since then I’ve done quite a few things. I’ve presented shows for many kids’ channels, like Nickelodeon, Disney Channel, and Cartoon Network. But as well as that, I was Stomp, so I’ve been able to do lots of things with that. I did the Olympics closing ceremony in London. That was a big highlight. Recently, I did the CBeebies prom, which was fantastic. Hans Zimmer came to see us, as the orchestra was playing a specially composed piece. There are so many cool things that I’ve been able to do. Travelling has also been a big part of it. I’ve managed to see the world, visit places I probably would never have visited, like South Africa, Tokyo, Venezuela, all through work.

NC:                There are different places for different reasons and you have different experiences in each. I don’t think I could have a favourite. I enjoyed Japan for the incredible food. I probably had the best meal of my life ever in Japan. It was like a 23-course meal. You only get these tiny bits, but literally your taste buds were doing somersaults. Incredible. But then somewhere like Venezuela or the Philippines, the people were just so lovely and warm and welcoming.

Q: Stomp is fascinating. It used to be a West End musical. Where is Stomp at the moment and do you think we could see it again in UK at some point?

NC:                We’ve been all over the place with Stomp. Stomp is always going. We have currently three, sometimes four companies around the world. We’ve got one in New York, one touring America, one touring Europe, and then sometimes we’ll put in a fourth one somewhere else in Europe or the world. I just got back from Naples. We were out there performing for Christmas and New Year. And I was in Athens at the end of last year as well. I only fill in from time to time when we’re putting that fourth group together. I’m sure that at some point it will be back here in the UK and you’ll be able to see it.

Q: What are you up to next? Because we know you always pull something new out of the bag.

NC:                One of the things that I’ve been working is the new Cbeebies ballet. That’s going to be coming very soon. And then Baby Club Series 3 later this year. There are a couple of other things as well. Through Dadvengers, I’ve got a top, top secret project and part of that is a podcast, a Dadvengers’ podcast where I speak to hands-on dads that are out there doing it. I’ve got a list of people that I want on the show. Dads like Rio Ferdinand, Joe Swash, Ashley Banjo, Ore Oduba or Josh Gad. Those are the kind of dads that I want on the Dadvengers’ podcast. Hopefully you’ll be seeing that later this year. I’m having a good time at the moment. 2019 was really good, and 2020 promises to be another good year as well. 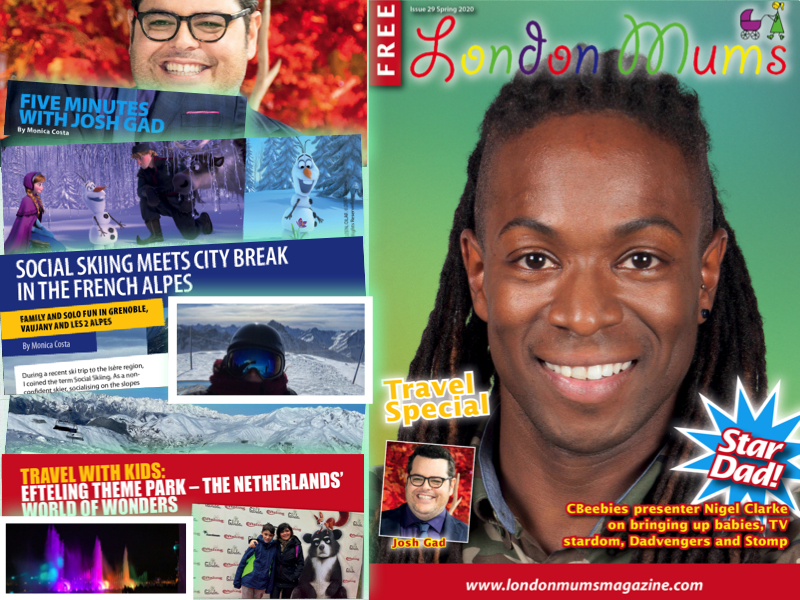 You can download the pdf of the Spring 2020 magazine issue from here https://londonmumsmagazine.com/wp-content/uploads/2020/03/LONDON_MUMS_2020_Issue_29_R1.4-LR_Spreds.pdf

This entry was posted on Thursday, April 16th, 2020 at 11:31 am and is filed under Mumpreneurs & Mums at work. You can follow any responses to this entry through the RSS 2.0 feed. Both comments and pings are currently closed.