Poor working mums to be hit by new welfare reforms, pushing a quarter of a million children deeper into poverty

Save the Children launches MUMS UNITED campaign for struggling working mums. During the week of Mother’s Day, mums and celebrity mums across the UK are standing as ‘Mums United’ with Save the Children behind the slogan ‘Make Mums’ Day, Make Work Pay’. 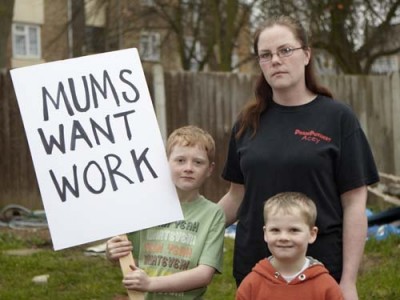 As the new budget looms, they are joining behind the charity’s calls to George Osborne after discovering the new welfare system will hold back 100s of 1000s of mums from the workplace and drive a quarter of a million children deeper into poverty. 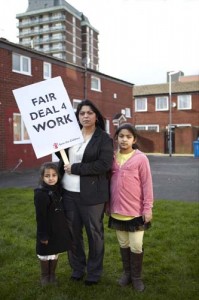 The charity’s new research shows that 150,000 of the UK’s poorest single working mums could lose up to £68 a week under the new Universal Credit, pushing a quarter of a million children deeper into poverty. The findings also showed that the reforms will affect ‘second earners’ – most of whom are women – with some families losing up to £1800 a year. While many will be helped by the new system, a total of 1.1million families with children will be left poorer after the new changes than they are now. 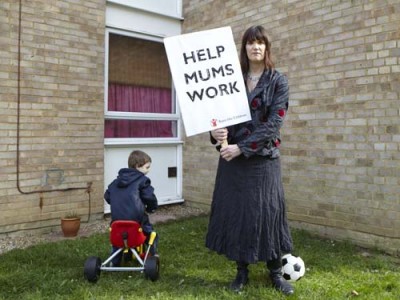 With female unemployment already topping 1m, and mums struggling with cuts to tax credits, childcare support and child benefit, mums from across the UK are using this year’s Mother’s Day to voice their discontent, many for the first time, about their struggles. Celebrity mums, including Kym Marsh and Karren Brady, have added their voices to the online campaign www.savethechildren.org.uk/mums-united, helping raise awareness of the silent struggles these mums are faced with on a daily basis.

Kym Marsh said: ” Having been a single mum on benefits I completely understand when they say that the best chance kids have of not growing up in poverty is if their mums can work. The problem, though, is not just the cost of childcare – every mums nightmare !! – but also that the government’s new welfare reforms coming in are going to mean work won’t pay for some of the poorest mums out there. So what happens to them and their kids?’

Meanwhile, childcare costs continue to soar, causing further reasons to keep mums out of the workplace. A new poll by netmums for Save the Children’s Mums United campaign showed 56% of mums said the main thing stopping them from taking a job or making them consider giving up work is the cost of childcare. 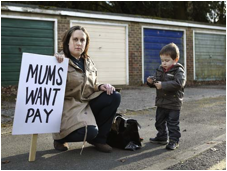 Justin Forsyth, Save the Children CEO said: “Universal Credit will help some families, but mums working hard to stay above the breadline are its big blind spot. A single mum on £370 a week simply can’t afford to lose £68. Mothers who want to work more to provide for their children while juggling soaring childcare and living costs should be getting more help, not less. The government must make sure mums who want to work keep more of their incomes and get more support with childcare. Otherwise we’ll see fewer women in the workplace and more children growing up in poverty.”

Save the Children is launching its Mums United campaign in collaboration with Gingerbread, the Daycare Trust and Netmums to make work pay for mothers who want to work their way out of poverty. It makes three main calls to Chancellor George Osborne for the Budget on 21st March:

– Ensure single working mums keep more of their incomes before losing any benefits, as they are the only earner in the family.

– Ensure second earners keep first £2000 of their earnings without losing any benefits, as main breadwinners do;

– Increase support for childcare costs for low income families from the current level of 70% to 80%, to make sure mums are not priced out of work.

Mr Forsyth continues: “Too many children in this country are going without basics like hot meals or proper clothes because their parents can’t earn enough. We know from other countries that supporting mums who want to work takes children out ofpoverty, so we need a system which offers mothers that choice. Unless we seemovement on childcare and benefits for struggling working mums in this budget, it could be too late for hundreds of thousands of children.”

The main findings of the Save the Children research are:

– Lack of funding means that many poor parents trying to work more hours will lose out under Universal Credit, pushing more children into poverty. The majority of children in poverty live in working households;

– A typical single parent with three children, working full time on or around the minimum wage, could be as much as £3500 (£68 per week) worse off;

– A single parent with two children, working full time on or around the minimum wage, could be as much as £2500 per year (£48 per week) worse off;

– As well as hitting single parents working longer hours, the new system will support single earner couple families at the expense of couples where both parents work part-time on a low income. A typical low income couple with three children where one parent works 24 hours a week and the other works a few hours on low pay could lose as much as £1800 (£35 per week) under the new system;

– The number of people having to work part-time but wanting full-time work has recently reached a record 1.3 million;

To join Save the Children’s Mums United campaign, please go to www.savethechildren.org.uk/mums-united and sign your name. To watch mums joining the campaign online, follow #MumsUnited

– Universal Credit will streamline the current benefits and tax credit systems into one system. Its impact on family incomes will be complex and vary by family type and size, and by housing and childcare costs. Many low income working families will see increased incomes and improved work incentives, which is very welcome news for those in poverty.

– A single mum who is £68 a week worse off has three children and has earnings from work of around £242 a week (equivalent to working 35 hours a week just above the minimum wage). Her gross income after housing costs is £370 under the current system and £302 under Universal Credit. The calculations are based on a family with average local authority rent and average pre school childcare costs.

– Across the country there are now over one million women unemployed, up from 700,000 in September 2008, with a further 1.3million women classed as economically inactive (as opposed to counted as being unemployed) but wanting a job. 2011 was the first year since 1996 that the Job Seekers Allowance (JSA) claimant count for women was consistently over half a million.

– Female employment and child poverty are inextricably linked. In countries where child poverty is lower there tend to be more women in work.

– The Government has said it will ensure no one is worse off under the new system in cash terms by making extra payments to those whose entitlement under Universal Credit is lower than under the current system. However, this protection will only be provided to current claimants and for a time limited period. Details of cash protection have yet to be fully set out. If the circumstances of the claimants change (what this means has not been defined) then they may lose this protection. New claimants will not be protected.

– Some working poor single parents will be better off under the new system because Universal Credit is likely to boost the incomes of single parents working less than 16 hours a week on low pay. However, there will be less of an incentive for this group to increase the number of hours they work to more than 16 compared to the current system.

Tags:  home working mums in business poor mums workingmums
This entry was posted on Tuesday, March 13th, 2012 at 3:39 pm and is filed under Blog, Mumpreneurs & Mums at work. You can follow any responses to this entry through the RSS 2.0 feed. You can leave a response, or trackback from your own site.