Mumpreneur’s testimonial: Mia Drennan and her headhunting business based on flexible working practice

Mia Drennan is the first ever winner of Workingmums.co.uk‘s Working mums champion award. The award recognises both the way her headhunting company Square Mile Connections treats staff and how Mia advocates for wider changes in work culture. 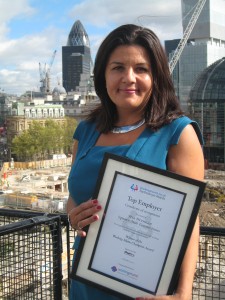 Mia’s staff not only work flexibly, but she has recognised this formally by introducing contracts that are based on hours worked rather than days worked. She also tries to convince the clients she works with that a full-time staff member might not always be the best option for them. In fact, she has just placed a mother of two in a US bank. “Her driver was flexibility,” says Mia. “She has two young girls and wanted to come in early and leave early then work from home in the evening. She had offers from four firms and none had any problems with this. It was really refreshing. That is something we want to see happening more.”

Mia, who has a ten-year-old daughter, set up Square Mile Connections seven years ago. Before that she had spent just over five and a half years at the Bank of New York’s Global Trust & Securities Services business where she was responsible for managing a large team of finance professionals. She says with so much contact with entrepreneurs she was “always going to set up her own business”.

It was an amazing five years, she said, but she began to feel that banking was becoming too autocratic and she was spending too much time travelling. She was working with a law firm who were looking to open an office in London. “I thought I could do that,” she said, “but the driver was that I needed the change. I needed some more flexibility.” She found an office for the firm in Newbury, near her home. For the first few months she worked on her own which she says was difficult to get her head around after having been in a team.

Soon, though, she realised she needed some administrative support. It was hard to get the support she needed, though, as she was not entirely sure what direction to go in. Fortunately, she was approached by Nicola Ogston who has a background in recruitment. Nicola was overqualified for the role she applied for so Mia created a role for her as recruitment director. “She has been instrumental in growing the business,” says Mia. Gradually she began to get more involved in headhunting and built up referrals and clients.

Mia also began to build up her team. She says she had underestimated how hard it is to set up a business, to have an overview of everything that is going on and to be able to trust others to do the jobs that she does not have the skills to do. With time and experience, though, she has built up a great team. 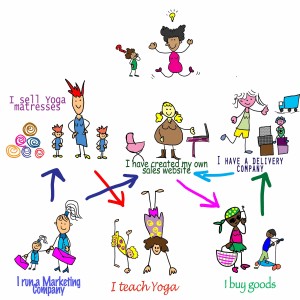 She is passionate about flexible working. “I know there is a lot of talent out there being wasted, professional women who cannot go back to the 50-hour week mentality but want to utilise their skills,” she says. “A lot of my business is about talking to people and I am keen to show clients how they can tap into that talent pool.”

She adds that Square Mile Connections, now based in the heart of the City, is not like other recruitment agencies which tend to favour a long hours culture. “We want to keep our staff motivated so we look at what we can do to achieve that, for instance, offering flexibility such as job shares which means you get six days for more or less the price of one staff member,” she says. One staff member lives in Wiltshire and works mainly from home. “She puts in 12-hour days, though,” says Mia, “and I have to tell her to turn her Blackberry off.”

Mia stipulates that people should spend at least one day a week in the office together. “I think the social side is important in keeping people motivated,” she says. Homeworkers are connected through Skype, conference calls and scheduled chats. “Homeworking is not for everyone,” she says, adding that she uses an assessment tool to put people through a number of scenarios so she can assess if it will work for them and for the business.

Mia adds that she is increasingly seeing clients who are interested in diversity and in looking at changing the way managers think about work. The Lord Davies review on boardroom diversity is galvanising industry to think more carefully about how they recruit. “There are still a lot of attitude issues, though,” she says. “And it has to be led from the top.” She is determined to focus over the next year on pitching her message about changing work culture at boardroom level. “We work at a level where talent is in high demand,” she says, “and the big question is how to attract the best people.”

Workingmums.co.uk’s awards aim to spread good practice about flexible working. The jobs and community website is holding its second Workingmums LIVE event – a one-stop shop on all things flexible working – in London in March. For more information visit www.workingmumslive.co.uk

This entry was posted on Friday, January 6th, 2012 at 2:41 am and is filed under Blog, Mumpreneurs & Mums at work. You can follow any responses to this entry through the RSS 2.0 feed. You can leave a response, or trackback from your own site.