Mumpreneur’s testimonial: Denise Soden only Wanted To Earn Enough Money to be able to afford blinds for her conservatory!, and so, Lillipops was born

Another inspirational mumpreneur’s success story. Denise Soden, 39, founded Lillipops in 2009. Pregnant for the first time in 1997, Denise and husband Matt were ecstatic. A week later, however, she was retching and wretched! Denise was experiencing severe vomiting and nausea, struggling to even keep water down, and was diagnosed with hyperemesis gravidarum – an extreme form of morning sickness that can lead to serious physiological problems for mother and child if left untreated. 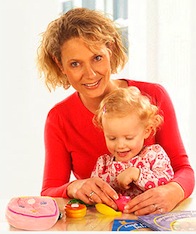 In fact, Denise was a chronic sufferer and was hospitalised for dehydration 13 times. Her severe vomiting eased at 25 weeks, but she remained nauseous throughout.

Thankfully, Denise gave birth to a healthy 8lb 3 oz boy, Ben. But she was in poor physical health, losing over 3 stone in weight in the first 20 weeks of her term alone. Denise experienced the highs and lows and fatigue of being a new mum to her firstborn.

Importantly though she was struggling emotionally mainly as a result of her extreme experiences in pregnancy, which impacted on her life over the next 2-3 years. And, there was more. In 2000, she had to deal with close family bereavement, was involved in a car crash and then lost her job, at that time in sales, all in quick succession. With everything that was going on in her life, Denise determined that Ben was destined to be an only child. And, so he was for 5 years.

But, as they say time is a great healer – or at least helps block out some of the worst bits! Denise and Matt decided they wanted to try for another child. Unfortunately for Denise, she was again stricken with hyperemesis gravidarum. This time not quite as severe – she was hospitalised a mere 4 times! Denise credits this improvement to the fact that she managed to keep up her hydration levels by sucking on ice cubes. Oliver weighed in at a bouncing 8lb 6 oz.

With the birth of Oliver, Denise and Matt had their family. They moved home and took on major renovations. Then in 2006, Denise discovered she was pregnant. Totally shocked, she and Matt nevertheless rallied. 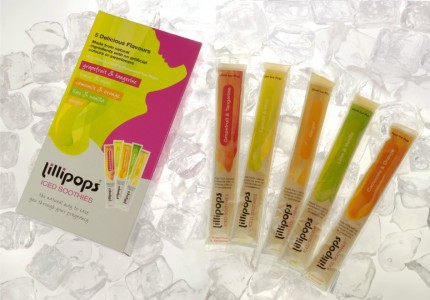 She knew from having Oliver that ice was her lifesaver, so when they found out that they were expecting Lilly, the first thing they invested in was an American fridge – with an icemaker! Denise decided that she needed to research how to manage her hyperemesis gravidarum this time round. But, understandably, by this time she was “desperate for some flavour”! She started experimenting with natural juices and ingredients, most of which have become the flavours for Lillipops – and as well as a beautiful baby daughter, Lilly, a brand was born. Lilly was born weighing 7lb 12oz – and Denise was at home right up until she gave birth.

It’s often the simplest of ideas that are the best. Denise was convinced that ice cubes had helped her and would do the same for other stricken mums-to-be, so she started to research the possibilities. She was able to draw on her own experiences when it came to the formulations – ice pops are a perfect size and easy to pop into any size freezer and the flavours are natural, good for mum and baby and have been traditionally used for their calming and digestive benefits. Idea formed, it seemed only natural to name it after one of their children – and Lilly was voted the best fit.

Family is important to the Sodens and is involved in manufacturing and design – the products are produced in Ireland where the extended family comes from; packaging is the creation of cousins with their own design agency in Ireland – and mum handles childcare when Denise is dashing off to meetings, signing off orders or personally answering the many e-mails from grateful customers.

With a young family – and a house to renovate, Denise knew the idea would work and played it down with the justifying thought was that she might earn some extra cash to help pay to put the finishing touches on their home! A complete change from Denise’s previous career choices – she was also an in-demand Film & TV extra.

Now Lillipops is not only rolling out nationwide here in the UK on-line, in independent chemists, and in private maternity units, but is exciting interest worldwide. But, Denise could have been a little more confident – she visited a psychic in May 2008 who predicted she would set up a successful business …..

This entry was posted on Thursday, November 3rd, 2011 at 2:52 pm and is filed under Blog, Mumpreneurs & Mums at work. You can follow any responses to this entry through the RSS 2.0 feed. You can leave a response, or trackback from your own site.