Singing star Michelle Heaton, recently pulled on a white lab coat as she got into character as ‘Professor Michelle’ during a visit to a children’s science class in Harpenden to learn all about the concept of flight.  The special session run by nationwide early years science class provider Mini Professors, in celebration of Children’s Activities Week, was themed around a ‘Watch me Fly’ campaign in collaboration with autism charity Caudwell Children of which, Michelle is a passionate ambassador. 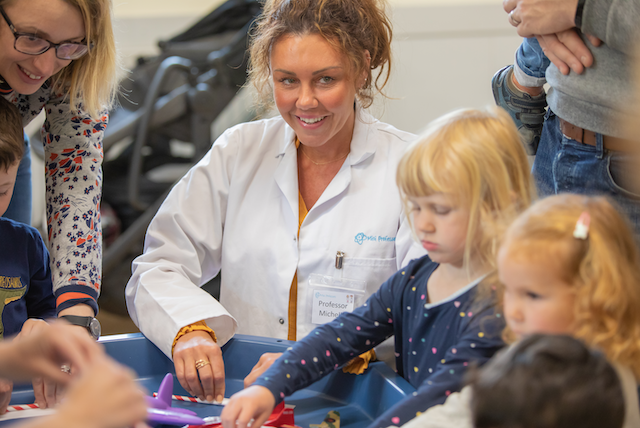 Having experienced a fairly turbulent journey into parenthood herself when her youngest child AJ (Aaron Jay) was diagnosed with viral meningitis at just five weeks of age, the former Liberty X singer (39), is keen to raise awareness of the importance of early intervention in childhood development generally and she believes that engaging in group activities like this from a young age can really help parents on many levels.

Holding husband Hugh Hanley’s hand, she explained: “We had a rocky start with AJ and it was a hugely scary time, he’s five now and thankfully doing really well.  But sensory play and early intervention through activities like this are so important because the more you do, the better your chances of spotting earlier signs of concern which might be linked to your child’s health or development issues, no matter how small. Even just being around other parents and their children helps. My son just got his first pair of glasses and he needed quite a strong prescription in both eyes. This kind of stuff is quite hard to spot while kids are so young because you aren’t always looking for them, but it’s now clear that he was struggling because he couldn’t see properly; perhaps doing more of these kinds of activities might have alerted us to the issue earlier, who knows?” 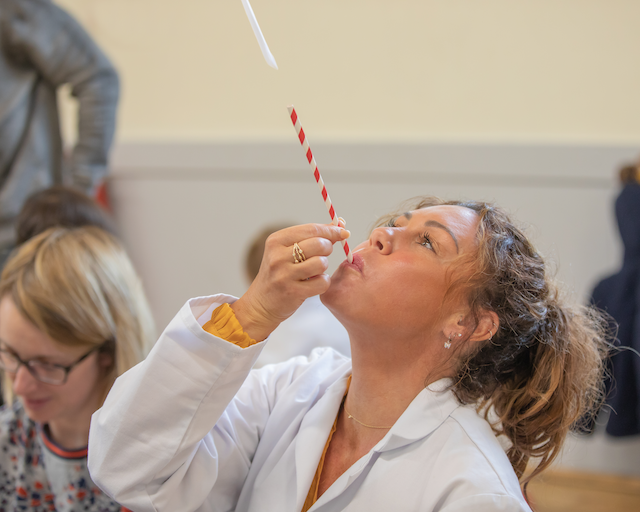 As she joined in amongst the bustling group of parents and children with an array of fun interactive activities themed around the concept of ‘flight’ Michelle was very vocal on the idea that anything that gets kids socialising and interacting with others is vital, “Kids can become clingy”, she added.  “Activities like this build confidence from a young age and help children feel more at ease when they start school.”

During the Mini Professors session, Michelle explored the dynamics of flight with the children, singing, playing games and taking part in fun experiments such as flying paper planes and making and launching straw rockets, “We tell our kids off for doing this in restaurants!”, she joked as she fired the straw rocket towards the ceiling.

Getting into the science spirit, Michelle reminisced about her school days: “Science and English were my two favourites subjects at school.  I loved my Bunsen burner, making a mess and dissecting things”, smiles Michelle.  “One of my favourite science lessons was learning about how a flower grows and we had to try and keep the flower alive using the concept of photosynthesis”, she recalled. 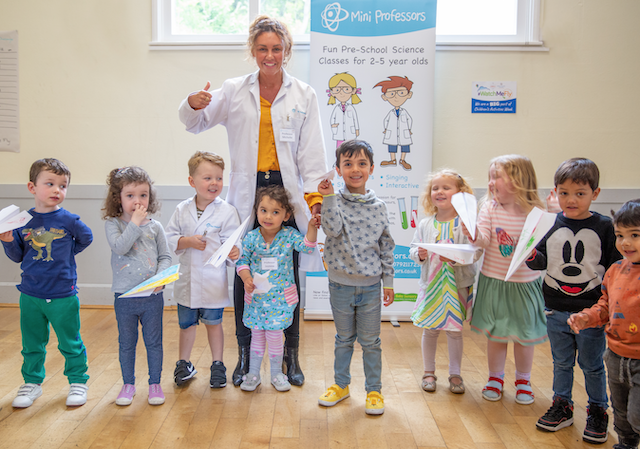 Scientist Tash Spink (PhD), class leader for Mini Professors in Harpenden and St Albans (who ran the session with Michelle), commented: “We are very proud to be a regular supporter of Children’s Activities Week and to be working with Caudwell Children this year to help raise funds for children and families affected by autism. It was great having an inspirational parent like Michelle along to our class, she really got involved with the whole group and the children really enjoyed meeting her too.”

Speaking after the session, Michelle added: “It was amazing being Professor Michelle today, the children and parents have been wonderful and welcoming. I’ve been an ambassador for Caudwell Children for nearly 20 years and anything we can do to gain more support for those children and families diagnosed with autism really does make a difference.  Children’s Activities Week has given us a great platform to show how important these kinds of activities and experiences are for children everywhere, so today was important on so many levels.”

Mini Professors science sessions are designed to inspire a passionate love of learning from a young age and to highlight that science itself also supports the development of fine and gross motor skills, socialisation, sharing, taking turns, confidence building and asking questions.

Mini Professors is a UK-based early years science programme designed specifically for young children aged from two to seven years. Working in line with the National Curriculum (Early Years Foundation Stage and KS1) sessions are led by highly qualified class leaders who are passionate about making the wonder of science engaging and accessible to all.  Equipped with their own mini lab coats, the warm and welcoming classes allow younger children to explore, experiment and learn basic scientific principles in simple terms and in a hands-on, safe and fun-filled environment covering different topics each week.  Mini Professors is part of the WOW World Group (the team behind the award-winning Baby Sensory programme) and also a founding member of the Children’s Activities Association.

To date Caudwell Children  has provided services worth over £40million to over 42,000 children with over 650 different medical conditions. The charity is committed to changing the lives of children by providing specialist direct family support, equipment, treatment, supported holidays & short breaks and its autism service. Caudwell Children was registered in March 2000 and is widely recognised as one of the country’s fastest growing children’s charities. Since its inception the charity has doubled every pound raised, achieved through supplier partnerships, which means every pound donated works even harder.

The charity was founded by philanthropist, John Caudwell, whose vision was to create a sustainable children’s charity that offered benefactors’ transparency and peace of mind that 100% of their donation was being used to directly change children’s lives. By donating the cost of the charity’s annual management and administration overheads, John has guaranteed an efficient way for individuals and businesses to change the lives of thousands of sick and disabled children living in the UK. John Caudwell remains the charity’s largest benefactor and holds the title Chairman Emeritus. The charity’s ambassadors include Peter Andre, Joan Collins, Elizabeth Hurley, Sir Rod and Lady Penny Stewart, Rachel Stevens, Robbie Williams and the late Sir Bruce Forsyth.

This entry was posted on Tuesday, June 4th, 2019 at 11:33 am and is filed under Mumpreneurs & Mums at work. You can follow any responses to this entry through the RSS 2.0 feed. Both comments and pings are currently closed.