For the first time, the impact of popular culture on self-esteem will be discussed at a global level, as Equalities Minister Lynne Featherstone travels to the United Nations summit where she will host an event on body image. 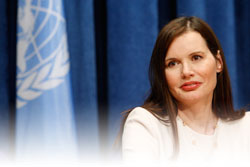 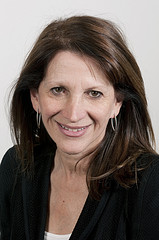 “Every day, women across the world are surrounded by body images which bear little or no resemblance to reality, whether that be the ‘size zero’ or the ‘perfect hourglass’. These images can cause real damage to self-esteem.

“In the UK, I am working with the media and other industries to reverse this trend and promote more honest depictions of women. Education also has a role to play if we are to empower people to challenge the status quo.

“But this has to be a global effort. If children continue to grow up in a world filled with images of uniform beauty and airbrushed perfection, future generations will never be happy in their own skin. This is why I am bringing the debate to the UN.”

Geena Davis, Academy Award Winning Actress and founder of the Geena Davis Institute on Gender in the Media, welcomed the UK’s body confidence campaign. She said: 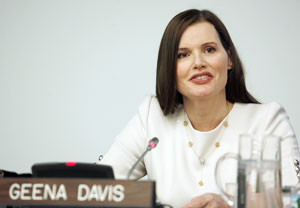 “I’m so pleased to be working with Lynne Featherstone and the UK government on body image and the way women are portrayed in the media. For the first time, this topic is being discussed at a global level and that’s hugely important.

“Hollywood and the media have the power to shift attitudes and achieve social change, particularly in how our children value themselves and each other. There is a real need to dispel the myths of the ‘perfect’ body that just don’t match up to the real world.

“Too often children are shown fictional worlds where there are far more male characters than female, and the female characters are valued most for their appearance. Boys and girls take this in, they internalize it, and come to see girls as less valuable to society than boys. Children need to see more female characters with varied occupations and aspirations, doing interesting, challenging things.”

The body image event is one of a series of high level activities during the two week UN Commission on the Status of Women, which will cover a range of issues affecting women.

International action to tackle violence against women and girls will be top of the Minister’s agenda, with statistics showing that around the world one in three women and girls has been beaten or sexually abused in her lifetime. As the UK’s Overseas Champion for this issue, Lynne Featherstone will set out action the UK government has taken to strengthen the law to protect victims of domestic violence, increase convictions for rape by ensuring every report is treated seriously, and highlight the protections in place for those facing forced marriage.

The Minister will call for more international work to uphold the rights and freedoms of LGB&T people, with homosexuality still illegal in over 70 countries worldwide and punishable by death in eight.

Combating the barriers faced by rural women, including access to education and finances, will be the theme of formal discussions. Women living in rural areas are playing an important part in the UK’s economic recovery, which is why the Government recently announced that £2 million would be allocated to support female rural entrepreneurs to set up or grow their business.

The 56th session of the United Nations Commission on the Status of Women takes place at UN headquarters in New York from 27 February to 9 March 2012. Its role is to prepare recommendations and reports on promoting women’s rights in political, economic, civil, social and educational fields and on urgent problems in the field of women’s rights.

Tags:  body image geena davis women in global media
This entry was posted on Monday, February 27th, 2012 at 10:54 am and is filed under Blog, Mumpreneurs & Mums at work. You can follow any responses to this entry through the RSS 2.0 feed. You can leave a response, or trackback from your own site.