Angellica Bell is a familiar face on British television with lots of prime programmes under her belt: she is a regular reporter for ‘THE ONE SHOW’ (BBC1 7pm), the flagship daily topical show for the channel which regularly attracts viewing figures of 5 million. Her career started in 2000 at Children’s BBC and her progression from children’s TV presenter to adult factual and entertainment programming has been successful and seamless. Her intelligent and warm presenting style has given her BAFTA recognition when she was nominated for two consecutive years in the Best Children’s Presenter Award category. She also won the Best Presenter Award at the Screen Nation Awards. London Mums have talked to her about her likes and dislikes, her life as a London Mum as well as her interesting work. Enjoy! 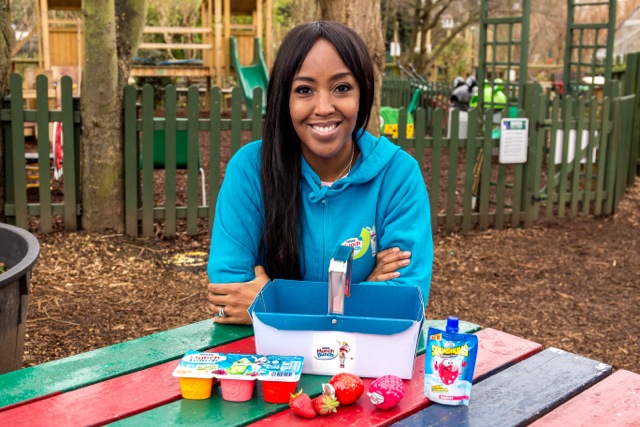 Q. How has your life changed since becoming a mother?

AB: Quite a lot! I am now looking after four people instead of two!

Q.  What are your biggest challenges as a mum in show business? How do you balance your work life and your family life?

AB: Biggest challenge was making certain people understand that family came first before my work schedule! I balance my work/family life by being highly organised and working together with my husband, Michael. We don’t have help, so we take it in turns to work and pay the bills right now!

Q. If you were Queen of Britain what would you do first?

AB: Ban dog owners from allowing their dogs to poo everywhere and not clear it up. The majority of dog owners are really good, but when you have small children running around in open spaces, you do notice it more.

Q. What do your children say about your job? Do they watch you on telly?

AB: They don’t even know what I do. They know I work and that’s about it. I think my eldest has seen me on television once but just acknowledged it was me and went back to playing with his blocks. I’m mummy to him! I haven’t put a picture of them on any social network and don’t use their names in print.

Q. What is your parenting style?

AB: Be the best mother I can be.

Q. What is your children’s favourite food and why?

AB: The children like lots of things, pasta, broccoli, chicken, actually anything and they love Much Bunch fromage frais hence why I got involved with the campaign. I want them to have a balanced healthy diet so that they don’t have any hang-ups when they get older.

Q. What is the London attraction that you love the most and why?

AB: The London Eye – I’ve filmed on it a few times and it’s testament to its success that it’s still with us 15 years after it first opened. You also get a fantastic view of all London’s attractions!
Q. Where do you like to take your children in London?

AB: We are planning on taking the children to the London Aquarium which we can’t wait to do. They love The Octonauts on CBeebies so they’ll be in their element.

AB: I love eating out so much so if you’re making me narrow it down it would have to be either Berner’s Tavern as it reminds me of being in New York, another city I love or The Hawksmoor, their steaks are incredible and I don’t eat red meat often, so when I do, it has to be good!

Q. What is your guilty pleasure?

AB: A weekend away with my girlfriends. I’m about to plan a trip for this year.
Q. What’s your favourite film of all times?

AB: I think the films that have made an impression on me are Cry Freedom, The Mission, Gladiator and Jerry Maguire! I have the soundtracks for all those films so they must have been good!

AB: Oprah Winfrey in The Colour Purple, Sigourney Weaver in Aliens, Kate Blanchett, Gabrielle Union – there are loads of great actresses out there!

AB: Russell Crow, Denzel Washington, Damien Lewis, Nicholas Pinnock, Ken Stott – there are loads of great actors out there too!

AB: I love music and all types of music but my first dance with Michael at our wedding party was to Happiness by Alexis Jordan.

AB: Love Stella McCartney shoes but I mix high street with designer so Vivienne Westwood for clothes and Mulberry for bags.

Q. Do you have a famous celebrity crush?

Q. Where do you like to go on holiday with your children?

AB: We’ve only had one family trip away as we didn’t see the point of going too far only to have to do the same routine somewhere else and pay for the pleasure. We went to Celtic Manor in Wales last year and stayed in one of their amazing lodges and we had the best time. Stayacations are great.

Q. Who is the person who has inspired you the most throughout your life and why?

AB: I’ve taken inspiration from many people from all walks of life, and some have been brief encounters especially with the work I do, so it would be a disservice to them all if I were to single anyone out.

Q. Who is a showbiz personality you have worked with who have made you laugh the most?

AB: I’m about to go and practice my cello after changing my son’s nappy.

TV presenter and mum-of-two, Angellica Bell is spearheading a ‘Good Stuff’ campaign for Munch Bunch that sees her providing tips for parents on fun ways to educate young children on where foods come from. To see her tips on enjoying nature trails together visit www.munchbunch.co.uk

Tags:  Deen City Farm Farm trip Visiting a farm Wimbledon
This entry was posted on Monday, March 30th, 2015 at 11:00 am and is filed under Mumpreneurs & Mums at work. You can follow any responses to this entry through the RSS 2.0 feed. Both comments and pings are currently closed.