EXCLUSIVE! World-renowned photographer Anne Geddes talks babies and her 30-year career at the launch of a global health campaign to highlight the impact of meningitis.

Bacterial meningitis is the leading infectious killer in children under 53 and MenB is the leading cause; the disease can result in death within 24 hours and life-long disabilities for survivors. Some of these survivors have been portrayed by iconic baby photographer Anne Geddes for a unique global photography project, which aims to raise awareness of deadly bacterial meningitis and encourage parents to be vigilant for the signs and symptoms. Editor Monica Costa had the honour to exclusively interview her while in London. 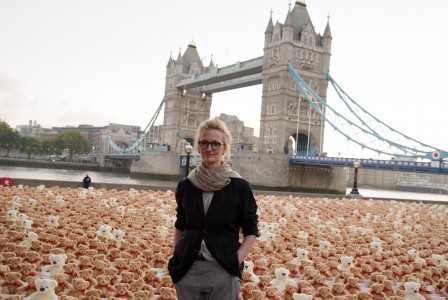 Q: How did you come to work with babies and what was the inspiration behind your now iconic first photos?

AG: It’s interesting with young people today who want to be photographers, a lot of them don’t understand that you need to put in all of those years doing practical work in order to establish a good background and be able to hone your craft – It’s very rare to become an instant success as a photographer. I had 10 years experience in portrait pictures beforehand which allowed me to gain knowledge of what it was like to work with babies and children and learn the different ways in which you must relate to a 6 month old as opposed to a 12 month old. Over the years I just realised that I loved the atmosphere around working with babies and everything that they stand for, newborns have no malice and are completely pure in mind and body and I think that’s what’s wonderful about them and the reason why people relate to them so positively.

Q: How did you get involved in this health campaign in particular?

AG: Well it was very easy for me to agree to get involved with the Meningitis campaign. It all started a while ago when I was approached by the charity to create this image of 15 survivors of bacterial meningitis. It’s now ended up being a worldwide campaign that we’ve been preparing for the last 12 months and I can say that it’s pretty much a dream come true to work on this. They were kind enough to give me free range to interpret the whole series as I wanted to and for any photographer to be able to express themselves in whatever way they feel appropriate is really amazing. It was also very nice also to do something that takes you out of your comfort zone, and to be involved in a series where you are creatively inspired and being able to make a difference to people’s lives is really fantastic. 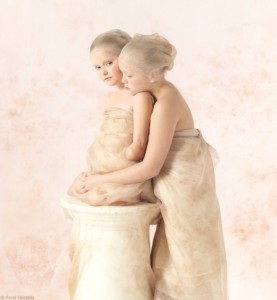 Q: Where about did you shoot the images? What was it like to work with the survivors of this horrible illness?

AG: We’ve shot the first three so far in Sydney. The first image we shot was of a little 6-year old girl called Bernadette she’s such a lovely little girl who unfortunately has lost fingers on each hand and both her legs below the knee due to contracting the disease.  I also photographed a 9-year old boy called Mackenzie who had lost all of his fingers and all of the toes on his right foot. As well as the two children, I photographed an amazing 20 year old lady named Danielle , she’s had over 60 surgeries in her life since contracting the disease but she hasn’t let anything get in her way so far. Her goal is to represent Australia at the next Paralympics in Rio! They all developed this Bacterial Meningitis when they were small and it’s just such a terrible, terrible disease that has such a huge effect on them for the rest of their lives.

Q: It is very important for people to be aware of Bacterial Meningitis as it can strike so suddenly and seemingly out of the blue, what are symptoms that parents should look out for?

AG: When my children were growing up I was always very conscious of the dangers of Bacterial Meningitis, and was terrified it would affect my children. However, it can be very hard to spot the signs as they are so similar to the flu. I think as a mother you have to trust your instincts. You know when something is not quite right with your child and if you think that it is something more than just a cold or the flu, then you should act on it and make sure that your voice is heard. It is very important that once you have recognised the symptoms that you act quickly and it is crucial to make sure that your child’s vaccinations are up to date… that is the main message we are trying to send via this campaign because obviously prevention is the best way of ensuring your child’s safety. It is my goal that these images will capture the inspiration and strength of these survivors while illustrating the life-changing impact this disease has on families every year. 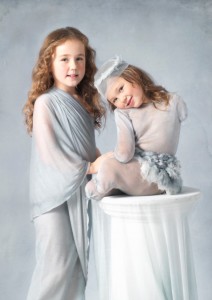 Q: What is your favourite part of London?

AG: I’d have to say Hyde Park and walking around there especially when the sun is out. It’s so nice to see families enjoying themselves and the whole of London just generally having fun outdoors.

Vaccination is the most effective way to prevent and control bacterial meningitis and septicaemia, however children are not currently protected against all types.

Novartis recently announced that the first and only broadly effective MenB vaccine, Bexsero® (Meningococcal Group B Vaccine [rDNA, component, adsorbed]) is now available in the UK for private purchase. The vaccine is indicated to help protect all age groups against meningococcal serogroup B (MenB) disease2, including infants from 2 months of age who are the most vulnerable6. Parents wishing to know more about meningitis are advised to speak to their GP.

The photographs of the campaigns UK stars, Amber Travers (5), Ellie-May Challis (9), and Harvey Parry (8) have been unveiled by campaign partners Meningitis Now and Meningitis Research Foundation. They will appear, alongside their families and other children affected by the disease from around the world, in a new e-book for the Protecting Our Tomorrows campaign, to be launched on World Meningitis Day, 24 April 2014.

Amber and Jade Travers
Amber, five, from Croxteth, Liverpool, is the youngest child to be photographed by Anne Geddes. Amber lost her legs and arms after contracting the disease aged two. She is pictured with her sister Jade.

Ellie-May and Sophie Challis
Ellie-May, nine, from Little Clacton, Essex, lost her lower legs and arms after contracting meningitis at 16 months. She is photographed with her twin sister Sophie. 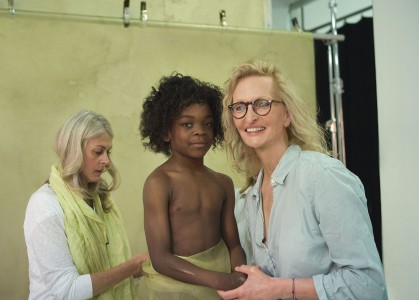 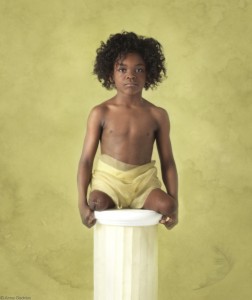 Harvey, eight, from Enfield, Greater London, lost both of his legs to meningitis just one week after starting to walk. Harvey is now a successful child athlete.

The image of the eye-catching installation of 3,400-strong teddy bears’ picnic on London’s Potters Field, in the shadow of City Hall and the iconic Tower Bridge neatly illustrates the burden of this life-threatening disease in the UK, with each bear representing someone who will contract bacterial meningitis and septicaemia every year.

This entry was posted on Friday, August 15th, 2014 at 12:35 pm and is filed under Mumpreneurs & Mums at work. You can follow any responses to this entry through the RSS 2.0 feed. Both comments and pings are currently closed.