After the magic Olympic season last year and Wimbledon this year, mums of big sport’s stars have come under the spotlight and I wonder what it takes to recognise talent in your children and nurture it to make them shine. Here is an inspirational exclusive interview with Lorraine Kenny, best known as mum to Jason Francis Kenny, OBE and English track cyclist, who along with Chris Hoy, won gold medals in both the team sprint and in the individual sprint at the 2012 Summer Olympics in London. 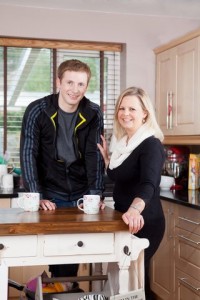 Q1) How important is it for parents/ carers to encourage a child in pursuing their dream?

LK: It’s extremely important for parents and carers to encourage children to pursue their dreams. I know it was important for us that we encouraged Jason to follow his ambition and love of cycling.

Q2) In what ways did you help Jason to achieve his?

LK: We used to support Jason in any way that we could – like all parents or carers we gave emotional support to help him achieve his dreams. We were always positive, no matter what the outcome at the end of a race we would always tell Jason how proud we were of him to give him the boost that he needed. We also used to take Jason to the velodrome to practice several times a week Sometimes it was difficult as we lived in Bolton and the velodrome was in Manchester so we had a while to travel, but we all pulled together as a family and supported him.

Q3) Did Jason always have an interest in cycling? At what age did you think that he may be a serious contender in the world of sprint riding?

LK: Jason was always very active as a child and he and his brother had a go at lots of different sports. He had a bike from being about two and would much rather cycle than walk. We discovered the velodrome when he was around 12 and he loved the challenge of the track. When he was a junior rider he competed at the cycling Revolution at the velodrome. At that time it was mainly endurance races and although Jason would usually sprint and leave the riders behind at some point in the race he very rarely won. However he was noticed by the British sprint coach, Iain Dyer who kindly offered him some training and it progressed from there. Iain is still his coach today and it is largely thanks to him that Jason achieved so much at a young age. 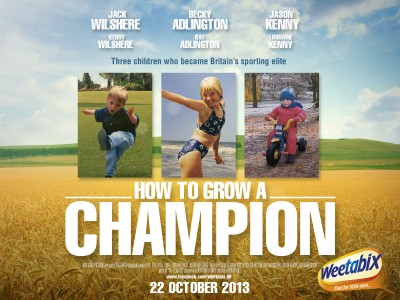 Q4) How do you feel about the Weetabix statistics that only around 40% of children under 5 receive a proper breakfast?

LK: The statistics from Weetabix that reveal that children under five are not receiving a proper breakfast is alarming, I know how important breakfast is – the first thing I do in the morning is have my breakfast, it sets me up for the day. This is a routine which I have passed over to both my children, and I know that Jason always ensures he eats his breakfast at the start of the day to keep him fuelled for the day ahead, this is something he always did as a child too. Also as a teacher I am fully aware that chldren need a good breakfast to ensure a good start to the school day.

Q5) Was ensuring Jason had a healthy balanced diet an important part of nurturing his talent as a champion?

LK: Getting a healthy balanced diet and good nutrition was very important for Jason. As he was training a lot we needed to make sure that he had the fuel he needed to energise himself throughout the day.

Q6) Do you remember any particular food likes and dislikes Jason had as a child?

LK: We encouraged both our children to test all kinds of food from a very early age. I remember putting salad on the high chair tray as soon as they were able to cope with solid food, of course at that point it would mostly end up on the floor but we never made a fuss, we just gave it to them. We never banned any food either, if we went out they could have sweets, but in the house we only had healthy snacks. I think Jason has very few dislikes as far as food is concerned, except he could never aquire a taste for custard?!

Q7) What advice would you give to Mums whose children may be considered fussy eaters?

LK: My advice for dealing with fussy eaters would be to get children involved with meal times, in my experience this will help and be as encouraging as you can be to try new foods. Children can sometimes feel intimidated or overwhelmed by big portions so it is important to keep portion sizes child friendly.

Q8) What has been your proudest moment as Jason’s mother?

LK: I think as a parent it is very easy to be proud of our children. I’m equally proud of my other son, Craig who is totally different from his brother. Yes, we have been very fortunate to enjoy lots of special moments with Jason and his cycling and when he stands on the podium there are lovely butterfly moments. However I still remember how proud I was when he sang Away in a Manger all by himself at a Christmas production when he was only six.

9) For other mothers out there, how did you know that your child had this particular talent and that it wasn’t just an interest that may have fallen to the wayside? At what stage ( If at all) should you go about encouraging the child to push in that direction without seeming overbearing?

LK: As I said earlier both boys had a go at lots of different sports as they were growing up. If they fancied a go, we let them have a go, but if they said they wanted to stop we let them stop and then had a look for another type of sport. The only one we instisted they went to for a time was swimming – for obvious reasons. So I would say let them have a go at any sport that they are interested in and you can find clubs for. If they love the sport, then they will give it their all and remember if they lose a game or a race they already feel bad, so tell them they still looked good it just wasn’t their day, but next time with more practise, good food and plenty rest – who knows?

Here is a brand new documentary How to Grow a Champion, in which Olympic track cyclist Jason Kenny’s mum Lorraine tells us how she raised her champion son Jason.

This entry was posted on Friday, December 27th, 2013 at 9:00 am and is filed under Mumpreneurs & Mums at work. You can follow any responses to this entry through the RSS 2.0 feed. You can leave a response, or trackback from your own site.