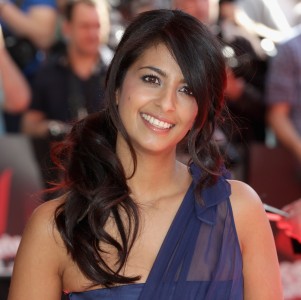 Q: First of all congratulations on your new baby. Every new addition brings a lot of extra work and tiredness to every mum.  How do you juggle work and family?

KQ: Not having an office job as such, my husband and I can both coordinate so that someone is around to watch the kids. At the moment while they are young I’m only doing jobs that are easy to manage around them so no overnights or long term projects especially as Huxley is only 8 weeks and is exclusively breastfeeding. Charlie is very busy with work at the minute and as we don’t have any help and Covey’s not at nursery yet, I’m just doing bits and pieces that aren’t too full on.

Q:  Have you enjoyed presenting Blue Peter or X-tra Factor the most and why? ?

KQ: Both were great jobs, fun, hectic and all consuming! But Blue Peter was like no other job and top trumps them all. A team of loads of young like-minded people travelling all over the world making all manner of short films to go into the live studio shows. The experiences and opportunities you have on that show are like no other. One minute you’re scuba diving in Hawaii, the next minute you’re interviewing the Prime Minister. The scope of places you went, people you met and experiences you had was like no other programme in the world. That’s probably why I didn’t leave for ten years.

Q: You are a true London Mum, born and bred in London. What is your favourite London area and why?

KQ: There are so many great areas, it’s hard to have a favourite in London, it’s a city like no other. I remember being really underwhelmed when I first went to New York because I felt it didn’t even come close. Central London has always been so cosmopolitan and amazing for arts and culture, aesthetic beauty and even for shopping! You’d think NYC would at least win on that front but I remember I couldn’t believe that there were no department stores that even came close to Selfridges or Harrods. ??I really like the Southbank, even more so because I remember when it looked like an ugly, grey, multi-storey car park. I used to think it looked scary when I was young, but a bit of lighting and a few eateries has worked wonders! It has such a nice vibe of an evening now. London is continually evolving and updating like this, I’m looking forward to the Earls Court and Victoria developments. At the other end of the spectrum, Kew is fab. Kew Gardens is beautiful, with loads to do and see. From the stunning peacocks, greenery and plant houses to the tree top walks and events, picnics and exhibitions, sometimes when there you can forget you’re in London at all.

Q:  You have done some serious acting during your career. What kind of movies, programmes or TV series would you like to be in if you could choose to have a part in?

KQ: It would be great to be in something like Breaking Bad available on Netflix. That was pretty much the most addictive show ever. Some nights, I’d be like ‘let’s watch an episode of Breaking Bad instead of a film so I can get an early night’ cut to four hours and four episodes later… ‘Shall we watch one more?!’

Q: This year we celebrate Shakespeare’s 450th Birthday. For two years running you have presented the Royal Shakespeare Company’s Live from Stratford-upon-Avon. What is your favourite Shakespeare’s piece and why?

KQ: Probably Midsummer Night’s Dream,  comedic, cheeky, a bit of romance and the interwoven plots, cunning and guile so well executed when it comes to Shakespeare.

Q: Who is your top writer of all times? ?

Q: You are a big Olympic supporter. What is your preferred Olympic sport and why??

KQ: Last Olympics I found the straight running races really compelling. I guess having people like Mo Farah and Usain Bolt to watch really helps but there is something so raw and basic elements about running. It’s not as much about having special equipment or training as other disciplines. It’s something most of us can do but only few can do so fast.

Q:  What is your guilty pleasure? ?

KQ: A tub of ice cream with a good film! When it comes to ice cream I have no self restraint. At the moment I’m really into Ben and Jerry’s All or Nut-ting, had a whole tub the other night while watching Fargo on Netflix. Seriously unhealthy.

Q: If you were Mayor of London for the day, what would you do to improve mums’ life in the Capital?

KQ: Drop in nurseries for mums. It would be great to have the facility to leave your child somewhere impromptu for a few hours. Especially for freelancers.

Q: And your favourite actor/actress of all times?

KQ: I don’t have one but one of my faves at the moment is Bryan Cranston. He is so brilliant as Walter White in Breaking Bad. Playing a high school teacher and wholesome father of two who turns from bad to worse to downright twisted, scary and a bit mental in a convincing manner is no mean feat, but he makes the role look easy.

This interview was published for the first time in the Summer / Autumn 2014 issue 12 of the London Mums magazine.

This entry was posted on Sunday, July 6th, 2014 at 12:10 pm and is filed under Mumpreneurs & Mums at work. You can follow any responses to this entry through the RSS 2.0 feed. Both comments and pings are currently closed.