EXCLUSIVE! Comedian and mother Olivia Lee reveals her secrets on how to be mindful mums and how not to lose our marbles

I recently interviewed comedian, actor and writer Olivia Lee – best known for her character comedy and her appearance on Channel 4’s ‘Balls of Steel’ with her slot ‘Prank TV with Miss Lee’ as well as for ‘Olivia Lee’s Naughty Bits’, Olivia Lee: Dirty, Sexy, Funny’. Monica and Olivia talked about Olivia’s album ‘Mindful Mum – How Not To lose Your Total Fucking Shit’ recently released via Decca Records. It’s about a unique spin on mindfulness, bringing laughter and anger therapy together, to battle stress and the pressure of parenting for 21st century mums. Bored of all the worthy meditation tracks that saturate the market, which tell you to just ‘be calm’ to ‘just relax’ and to ‘stay positive’, this is Olivia’s two fingered salute to these. It is a direct reaction to what she describes as “the trend of rigid positivity that this generation seem obsessed with.” Understanding that 8 in 10 parents believe there are more pressures on mums today than there were on their own mothers’ generation, Olivia Lee recognised the need for a modern-day remedy. It is the first album of its kind to exist, with X rated meditation tracks that feature her trademark outrageous no bullshit comedy style, and proudly carries the Parental Advisory Explicit Content label.

The meditations created for this unusual album are not just funny for the sake of being funny. There is a method behind the laughs as Olivia has written them with the hope that through laughter, she can actually help mums to feel better. Olivia calls this “laughter therapy”, and it is her qualification as a life coach and recent journey into motherhood that ensures Olivia knows what will make mums (and fathers) feel better.

While writing a script on Life Coaches, Olivia did a Life Coaching course as part of her research. She emerged with a life coaching certificate and tools that helped her to stay sane during the first few tough years of motherhood. Even with this qualification, she still lost her total f***ing shit but stopped giving herself a hard time for it, and finally let herself off the f***ing hook for being imperfect, realising that acceptance is key. 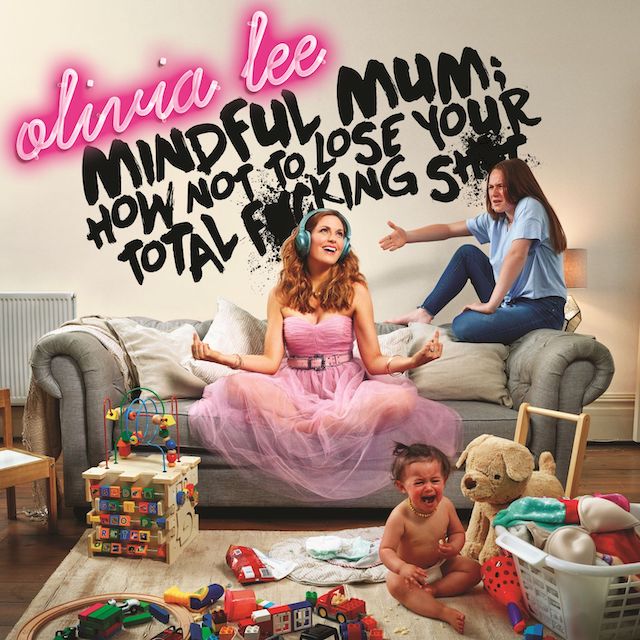 Olivia created and wrote this smart and hilarious album to help other mums to stay sane on their crazy journey through motherhood by embracing their angry inner selves and sharing in the fact they are not alone in their negative feelings.

Olivia Lee (OL): Monica, it’s so cool that we were already friends on every social media platform before even chatting in person.

Monica Costa (MC): I loved listening to your new smart and hilarious album. The word mindfulness is totally overused and over-quoted these days and I’m glad you’re putting a new meaning to it. Possibly the only true meaning. Are you a woman on a mission to reinstate freedom to the soul? It sounds very hippy and I love it.

OL: The problem I have with mindfulness is that culture is becoming extreme and is rampant at it everywhere. It just tells us to be grateful and happy. It also makes negativity something to be allergic to, when actually negativity is good. There’s a natural part of the human condition that’s negative and we are designed to feel uncomfortable. We’re not designed to always feel happy. If we were always so happy we would be diluting ourselves. It’s a delusion. It’s like saying that negativity doesn’t exist. And for me, becoming a mum, has meant that I can’t get myself out of this hole of feeling overwhelmed. Venting is so much healthier.

MC: I’m instinctively venting all the time because I belong to the generation of kids growing up rebellious in the ‘80s. All this ‘forced’ happy culture is not my kind of thing. I’m naturally a content person, but I am not embracing stuff that just doesn’t feel right for me. I’m so glad there’s someone like me out there. I’m sure we’re not alone, Olivia.

OL: By being more honest about how we feel we can better connect with like-minded people who can see how you really are. When mums can do that, they can connect and support each other. We’re living at a time when parents are trying to be perfect and there’s a bit of a disconnect.

MC: I’m sure all mums can relate to what you say so much, even if they don’t want to admit it. How did you come up with the idea for the album and do you actually walk the talk?

OL: Oh, definitely. The idea came while I was studying about life coaching for another project. But I had my son on one side and that made me see things in a different way. This really helped me embrace how I would genuinely feel. By combining that with all the comedy that I’ve done, I could create a new version of mindfulness. That got me quite excited. I’m prouder of this than anything else I have done so far, because it can help other mums.

MC: I could have benefited from this album when my son was a baby because at times I felt surrounded by all these perfect mums while having the most imperfect child, who did want to breastfeed 24/7, and didn’t want to sleep at night. Now he’s 13 but back then I was so scared of getting pregnant again because he didn’t sleep at night for four years. And neither did I. On the other hand, most mums seemed to have the perfect life. I often felt lonely and I set up the London Mums’ network to have a forum to open up about issues like that. A real group of opinionated mums as opposed to the so-called ‘Stepford wives’. Now, I’m up to my second bout of rebellious mumsy behaviour and I want to be a rock mum. After years of trying hard, I said to myself ‘Sod meditation’ and I started embracing the rock ‘n’ roll lifestyle. My vocal coach told me that singing in a rock band has the same neurological effect of meditation and mindfulness. So here I am gigging with proper rockers. I’m telling you, I have found my mantra. I don’t care about meditation anymore except for your funny ‘mindfulness’ album.

Considering there’s a lot of resistance in mothers these days to appear authentic as opposed to perfect – for posing on Instagram – how do you think this album will change that attitude to show off perfection?

OL: I hope to help mums that are fighting the constant bombardment of the perfected image. The only time I dropped the c-bomb on the album is when I talk about finding a tribe of like-minded women and avoiding the fake ones on Instagram. I just want to offer an alternative to that idea of perfection. I embrace the idea of imperfection and see perfection like nicotine. Whether it’s about trying to lose your baby weight really quickly or competitive mums, it’s all so exhausting. There are millions of women out there who are willing to be honest and open and do things differently. All I can hope is that after listening to my album any mum will be able to un-f*** themselves from the prison of perfection.”

MC: My London Mums’ tribe is honest and open with some exceptions, of course. But it may be because it is a very multicultural and multiracial community.

OL: You probably attract people that are like you.

MC: I’m not planning to have millions of followers. I don’t really care. I just do my things and whoever wants to be part of the imperfect and non-judgemental tribe is more than welcome. You’re currently turning the album into a live show with dates and venues to be announced shortly.

OL: Yes. We hear about toxic masculinity, i.e. men struggling to be vulnerable. There’s also this notion of toxic femininity out there, which is feeding women subconscious messages. The deeper message behind the album is that women need to embrace their rage and not to worry about being ‘f****able’, and being likeable. We need to allow ourselves to be angry because that’s a very forward-thinking emotion. I’ve read diverse books about female anger and I’m expanding on those feeds in the live show.

MC: I look forward to that.

OL: Come down to that so we can start our little rebellious movement of the mindful mums, the right way!

Warning! Mums, make sure you take a little time to yourselves, but the album is so X-rated that tracks are not to be listened to in front of the kids!

This entry was posted on Friday, October 11th, 2019 at 3:16 pm and is filed under Mumpreneurs & Mums at work. You can follow any responses to this entry through the RSS 2.0 feed. Both comments and pings are currently closed.