Television scheduling is a mystery of the modern age. How is it that I can sit at home on a Saturday night (err, because I was out on a Friday…) with nothing to watch and then bizarrely, a series by my favourite, Kirstie Allsopp can charge across the screens in the middle of the summer with barely a fan fare? 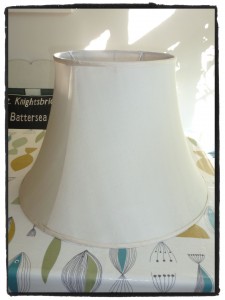 Fill your Home for Free wasn’t like any other design programme Channel 4 has ever featured. Yes, designers were involved and yes, they transformed the homes of two couples every week. But there the similarity ended because the starting point of each design was the transformation and repurposing of junk items sourced from outside peoples homes, skips, car boot sales and websites such as freecycle.

I’ve been transforming furniture for myself for years and it’s really satisfying to find an unloved object and give it a new lease of life. There’s a lot of character to be found in old furniture, so it was exciting to see this approach given a bit of tv attention. The designers were really innovative with their ideas and led people to look at objects in a completely new way – bath tubs or shopping trollies became chairs, radiators and washing machine drums became coffee tables.

Ok, so this may stretch your imaginations, but we’re all asked to separate out our household waste and why should unwanted furniture be any different? Instead of throwing something out, donate it to an organisation that will allow someone else to re-use it. Even better, with a bit of thought, you might find a completely new use for it yourself. Like this old lampshade I found at a car boot sale for £2.00. Have a guess at what I wanted to make from it! 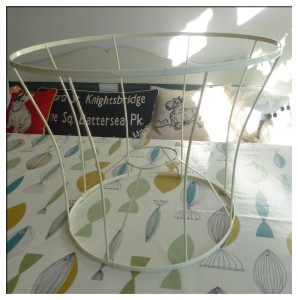 Then I laid out the fabric (about 1.5 metres) and using these measurements, cut out three panels for the body of the liner. I made the base slightly narrower, like a flower pot. I then measured the radius of the larger end of the frame, added on 5cm and using the measurement of the top of the panel already cut as the width again, cut out three rectangles to create a ‘lid’.

Next I stitched the three lid rectangles together to form a loop using the same flat felled seams and then with wrong sides together, I stitched the lid to the body of the liner. I enclosed this seam in bias tape leaving the tape open and using another strip behind (about 3.8 metres) so that it was wide enough to take elastic. I left an opening so that I could insert the elastic but stitched the lower edge closed with a bobble trim to add a light hearted touch.

Then I added bias tape to the raw edge of the ‘lid’ (about 1.7 metres) so that I could pull this closed with a drawstring. I left an opening for the drawstring and decided to conceal the bias tape on the inside, but this could be used decoratively if stitched to the front. 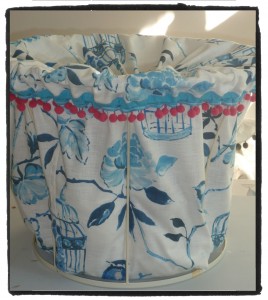 I cut a length of elastic 10cm shorter that the circumference of the larger end of the frame and with a safety pin, inserted this into the bobble trimmed outer bias tape channel. I knotted the ends of the elastic and let that slip inside channel, then I pulled the fabric to gently so that the fullness was even. Next I inserted the drawstring into the narrow channel and knotted the ends.

I fitted the liner inside the frame, eased the elastic over the larger end and pulled the liner down to sit over the metal fitting. 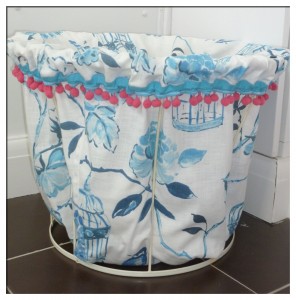 There you have it, a laundry hamper from a lampshade.

With a background in theatre and television design, I retrained when my children were small in interiors. Twelve years on, I still enjoy helping clients get the best out of their homes and prefer to focus on their lifestyle and needs rather than trends. I also write an interiors blog to inspire new homeowners to get creative, www.puttingthelovein.wordpress.com

This entry was posted on Sunday, September 15th, 2013 at 9:00 am and is filed under Get Creative. You can follow any responses to this entry through the RSS 2.0 feed. You can leave a response, or trackback from your own site.