Five minutes with the creators of The Adventures of Abney & Teal

“Abney and Teal how does it feel,
To live in the lake on an island?
It’s just right for us – it’s adventurous!
And its home, home on our island.”
Monica Costa caught up with the creator, Joel Stewart, and executive producer, Anne Wood, of The Adventures of Abney & Teal at the Toy Fair 2013. This adorable and fun programme started in September 2011 and has been gaining fans ever since. Here we find out where the inspiration for Abney’s jumper came from and where the inspiration for the show’s unique setting hit! 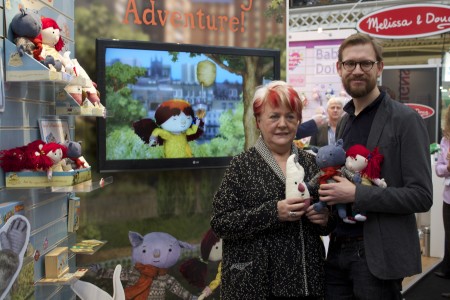 Q: How did you come up with the idea to create this programme?

Joel: I started by drawing the characters and I had them for quite a long time but I didn’t have a setting. Then one day I was walking in Victoria Park in East London and saw the island in the middle of the lake there. So there was a mixture of the sound of the city and the rural appearance of the area. I began to wonder if there might be something in that. 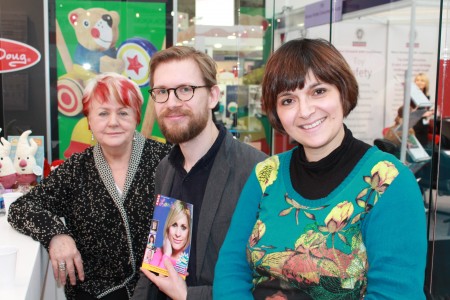 Q: The characters are very childlike. Do you know some children who inspired you when developing the characters?

Joel: I think I was more inspired by myself as a child than I was by looking at other children. A lot of illustrators will say that it’s their own childhood that they’re drawing on.

Q: So what childhood memories do you think led you to create this show? 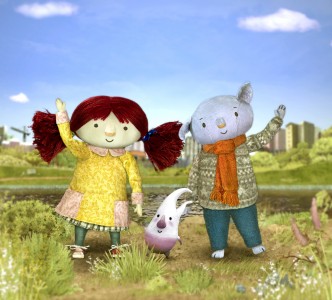 Joel: Well, in my early childhood I actually lived in a hippie commune in Yorkshire. This meant I had free run of nature, which is quite unusual for children now. We had animals and there were lots of different adults and children all living together. Abney’s costume is based on a jumper that my mother knitted for me. I wanted to offer children a freedom that they don’t have so much now, but in a place that was attainable like a city park.

Q: So, Anne, you must hear a lot of pitches for programme ideas. What made you love this one?

Anne: I have never, ever taken up something that’s being offered up – I always find my own people. I used to work in children’s book and knew Joel’s work as a picture book artist and felt there was a filmic quality to it. So when I knew I wanted to make something contemporary but also traditional in its style and its approach to drawing, I thought of Joel. We decided to have lunch and discuss it. It’s very important that you respect the person you’re working with and you have a shared idea of what you want for a project. I’m very proud of it – it’s traditional and also very funny. 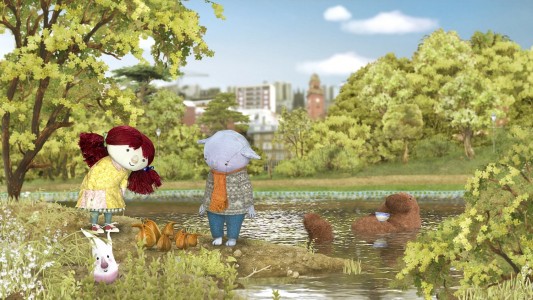 Joel: It’s a combination of pretty much everything. It’s put together with a computer but always based on handmade items. There’s a real puppet and it’s photographed from many different angles. I though this approach would be simple but it’s actually quite challenging for the animators. I don’t think anyone’s used this approach for children’s television before. We’ve both referenced the traditional and gone out on a limb with this method.

Q: Who’s your favourite character? You must have one… 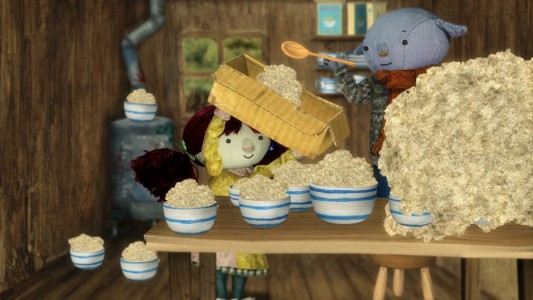 Joel: That’s quite difficult. It’s probably between Abney and Neep. Abney is probably a bit like me. He has a certain amount of reserve which is actually quite an adult characteristic but then he’s silly underneath. Neep is just pure fun and we get to do a lot of slapstick with him.

Anne: I never have a favourite. I have made a lot of television programmes and I refuse to pick one. It’s like picking a favourite child!

Q: Do you think it will be a long-lasting show?

Anne: Yes, it has been very well-received by the BBC. We have already been asked to make some more. We just need to raise the money now!

This entry was posted on Saturday, September 7th, 2013 at 9:00 am and is filed under Get Creative. You can follow any responses to this entry through the RSS 2.0 feed. You can leave a response, or trackback from your own site.