Nearly half of working parents admit to dreading the start of the school summer holidays, a study reveals today. Difficulties juggling work and childcare and having to entertain their kids for six weeks mean millions of parents aren’t looking forward to the long stretch ahead. 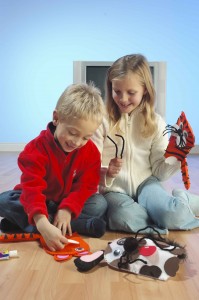 • 42% of parents feel the school summer holidays are too long

• Three weeks and three days in, the majority of parents say they’re looking forward to their children going back to school

The survey, commissioned by Hobbycraft polled 2,000 working parents of school aged children, revealed that over half of children are cared for by people other than their parents over the course of the school summer holidays, with 89% of parents relying on up to five different carers – grandparents proving the most popular choice. More than a third of parents said they still haven’t got childcare arranged for the full six weeks, despite the start of the holiday already here.

But it’s not just childcare issues parents are facing this summer as a third worry the house will be a constant mess with their kids at home all day, while 22% aren’t looking forward to the overcrowded local attractions. As a result, over half of parents admit to only enjoying the school summer holiday’s part of the time, with the poll pinpointing that by day three of week three, the majority of parents are looking forward to their children going back to school.

Catriona Marshall, CEO of Hobbycraft, comments: ‘For most children, the summer holidays are the best part of the year, six weeks without school or homework! For parents, grandparents and child minders it can be a challenge to keep them occupied, especially in rainy weather. That’s where Hobbycraft comes to the rescue, with ideas to keep children stimulated, learning and happy for hours on end.”

The study also revealed that cost was a particular worry for parents, with 65% saying they’re concerned about being able to afford childcare and entertainment to keep their children occupied whilst at work.

54% of parents felt the burden of organising the necessary care and entertainment fell more on mums’ shoulders than on the dads. Hobbycraft comments: “School summer holidays prove to be a re-occurring issue for working mums. Not only does it mean they have to find six weeks’ worth of childcare or take time off work, but they also have to find various ways to keep their children happy and entertained for the entire break.”

With school summer holidays now here, parents will be deciding how best to fill their children’s time. More than a third of parents are dreading the inevitable bad weather which will limit outside activities, so nearly half of those parents polled said they intend to entertain their children with screen time, including TV and video games, whilst just over one quarter plan on getting their children creative with drawing, painting and other crafts.

“For those in charge, creative play is an enjoyable and rewarding way to spend time with children….and the results are almost guaranteed to put a smile on everyone’s face! Adults beware that it can be both nostalgic and contagious. Before you know it, you’ll be absorbed in your own project and transported back to your own childhood!” Marshall continues.

Tags:  activity art & craft art & craft classes art course get creative school holidays
This entry was posted on Thursday, July 19th, 2012 at 10:16 am and is filed under Blog, Get Creative. You can follow any responses to this entry through the RSS 2.0 feed. You can leave a response, or trackback from your own site.