The Olympic Torch Relay is amazing to get us all into the Olympic spirit. Follow the torch at the official site

www.london2012.com/torch-relay and read an exclusive story written by one of of London dadpreneur who was inspired by the Olympic Games to create this story for his curious boy.

You can find this story at page 34 of our latest Jubilympic magazine https://londonmumsmagazine.com/magazine or read it here below. 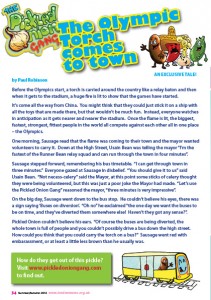 The Olympic Torch
comes to town

Before the Olympics start, a torch is carried around the country like a relay baton and then when it gets to the stadium, a huge fire is lit to show that the games have started.
It’s come all the way from China.

You might think that they could just stick it on a ship with all the toys that are made there, but that wouldn’t be much fun. Instead, everyone watches in anticipation as it gets nearer and nearer the stadium.

Once the flame is lit, the biggest, fastest, strongest, fittest people in the world all compete against each other all in one place – the Olympics.

One morning, Sausage read that the flame was coming to their town and the mayor wanted volunteers to carry it. Down at the High Street, Usain Bean was telling the mayor “I’m the fastest of the Runner Bean relay squad and can run through the town in four minutes”.
Sausage stepped forward, remembering his bus timetable.

“I can get through town in three minutes.” Everyone gazed at Sausage in disbelief. “You should give it to us” said Usain Bean. “Not necess-celery” said the Mayor, at this point some sticks of celery thought they were being volunteered, but this was just a poor joke the Mayor had made. “Let’s use the Pickled Onion Gang” reasoned the mayor, “three minutes is very impressive”.

On the big day, Sausage went down to the bus stop. He couldn’t believe his eyes, there was a sign saying ‘Buses on diversion’. “Oh no” he exclaimed “the one day we want the buses to be on time, and they’ve diverted them somewhere else! Haven’t they got any sense?”.

Pickled Onion couldn’t believe his ears. “Of course the buses are being diverted, the whole town is full of people and you couldn’t possibly drive a bus down the high street. How could you think that you could carry the torch on a bus?” Sausage went red with embarassment, or at least a little less brown than he usually was.

How do they get out of this pickle? Visit www.pickledoniongang.com to find out.

Tags:  dadpreneur exclusive Olympics london 2012 olympic games Olympic Torch Relay olympics storytelling
This entry was posted on Thursday, June 28th, 2012 at 9:40 am and is filed under Blog, Fitness & Health, Get Creative, Schooling. You can follow any responses to this entry through the RSS 2.0 feed. You can leave a response, or trackback from your own site.