What’s all the fuss about Minecraft?

“Minecraft is a building game,” says my 5 year old son…”and surviving from the creepy monsters!” added his brother, aged 7. Ever since their older brother, aged 19, introduced this Mojang game to them, a year ago, they have been fans. They love the building and construction, mining the materials like iron, cobblestone, Redstone, Diamond and Bedrock, to survive and create villages, castles, rockets, ships, aeroplanes and trains within many virtual worlds.

They can join together over 2 devices and collaborate and work together building communities, looking after livestock, like pigs, sheep, and cows. There are all kinds of challenges during the day and night from protecting themselves from hostile and passive creatures from Zombies, Endermans, Ender Dragons, Skeletons, Pigmen and Spiders to achieving targets to survive like making fire out of flint and iron with wood. (This helped my 7 year old’s knowledge about their Iron Age project in school). 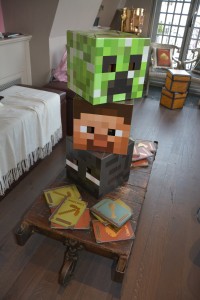 My two sons were so excited when they went to the Minecraft launch event in April, promoting the launch of 2 books; Combat and Construction handbooks by Egmont Publishing. There was a splendid spread of Minecraft food from ‘Coal Sweets” to Marsh Mellow Gold and cubed Chocolate Brownies with green grass icing.

The group of young fans had a fun filled morning, with a masterclass in combat with the Hollywood stunt man, Paul Lowe, who showed them creative ways of falling on crash mats and bouncing high on a trampoline and landing, attacking the enemy with a sword (which was made of foam of course). Then playing games on the computer and eating delicious sweets and cakes. The boys had such a great time and were delighted to take away a goody bag with their favourite soft toy characters, an Endemen and a Piggy and Minecraft T-shirts.

I must add, I do have a moral interest in moderating my kids time on the digital games, but when I see how much it serves their physical and mental development and computer skills I think it’s a good addition to their real world. 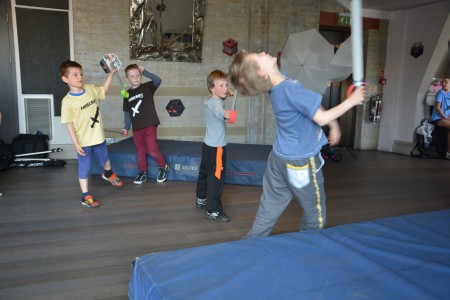 They have written stories and drawn pictures, discussed and debated about the game, found flint stones in the garden, made Minecraft character costumes out of cardboard boxes for ‘World Book Character Day’, at school and making new friends that have the same passion for the much loved game. 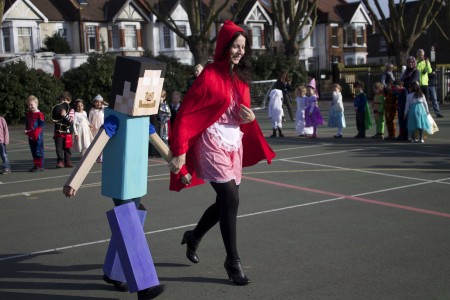 This entry was posted on Thursday, May 8th, 2014 at 12:10 pm and is filed under Get Creative. You can follow any responses to this entry through the RSS 2.0 feed. Both comments and pings are currently closed.