BOOM! Somebody knocked on the door.

Uncle Vernin came downstairs holding a gun. ‘Who’s there? To come my house, we haven’t invited anyone.’ he shouted. SMASH!! The door fell on the floor. A big man was standing there.

‘Hello Harry, can you make me a cuppa tea?’ Harry just stared and froze.

Vernon said ‘Get OUT!’

Hagrid said, ‘Shut up, Vernin! Harry, Happy Birthday.’ He gave Harry a squashed homemade cake with icing letters on. Harry’s first birthday cake ever. And another letter. Hagrid swished his pink umbrella at the fire place and a fire started burning. He found a frying pan out of his coat pocketziz, a pack a sossies and some iggs. He and Harry had a nice cuppa tea and a fry-up breakfast.

‘Who ARE you?’ Harry asked.

‘I’m Hagrid, Keeper of the Keys at Hogwarts.’

‘What is Hogwarts?’ Harry asked.

Hagrid turned angrily to Uncle Vernin, ‘Didn’t you tell him ANYTHING?’

Vernon said, ‘We don’t want him to be magic’.

Hagrid was very angry and twisted Vernin’s gun into a knot so he couldn’t shoot anyone.  ‘His parents were magic, Harry’s magic, and you can’t stop him, Vernin.’

Harry and Hagrid chitty-chatted about Voldimor, Harry’s mummy and daddy, and Hogwarts.

‘He’s NOT GOING to some magic tricks school!’ shouted Vernin.

Hagrid swished his pink umbrella and suddenly Dudderly was screaming and running round in circles coz he had a piggy tail!

Harry said, ‘But I’m not a wizard, I’m just Harry’. Hagrid said, ‘You’re a wizard Harry and you’re famous.’ Harry read the letter, telling him to go to Hogwarts, and to get his uniform and stuff for school. 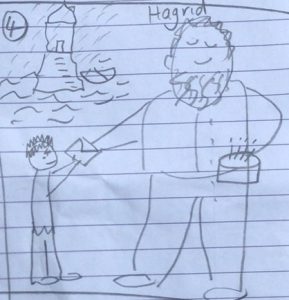 The above sketch was by me, to give Emma an idea of how to illustrate the most important bits of the story. She picked out what she felt she could do and drew her own version.

Below, the first two chapters of the book have come together, with the text on the left, of which some is Emma’s own retelling of the story. On the right, her drawing, painstakingly coloured in.

Chapter 1, Harry as a Baby, with the Dursley’s front door and Hagrid’s motobike. 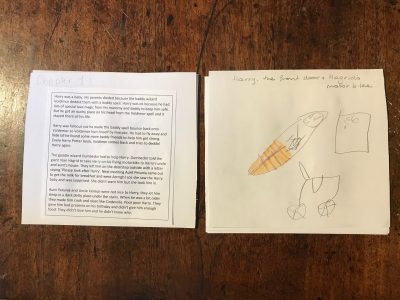 Chapter 2, At the Zoo, with the snake piled in a heap 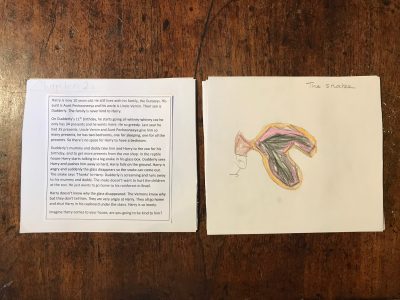 This entry was posted on Tuesday, January 17th, 2023 at 11:20 am and is filed under Get Creative. You can follow any responses to this entry through the RSS 2.0 feed. You can skip to the end and leave a response. Pinging is currently not allowed.