Here is an exclusive interview with one of the best dollmakers in Britain, Jill Bennett, which will be exhibiting at the Kensington Dollshouse Summer Festival this May 2012. 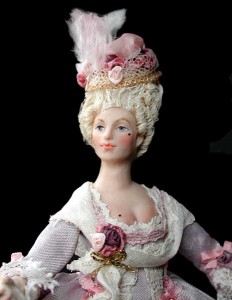 Here is Jill’s responses in her own words:

“Thank you for your interest in my former life!! It’s odd, for also I have some work on www.children’sibookillustration.com! Work for sale, would you believe!! My early encounter with Roald Dahl and my later encounter with the spirit of Dickens!! I much prefer the later! I have also had to write an article in a lovely mag. I hadn’t heard of before – the winter edition of Illustration – about that particular time with Dahl. My first book was Fantastic Mr Fox!! 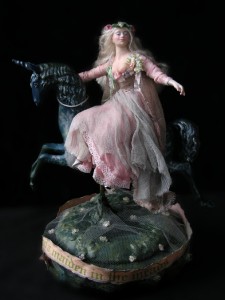 I trained as a Theatre Designer at Wimbledon School of Art and later went on for a post grad. to the Slade School of Fine Art. I just love the Theatre. When I realised I’d never make an actress, and as I also loved Art, I was delighted when I learned I could put the two together.

My first job was a small production of Phedre, with no money, but good actors. I married, and found myself taking an ILEA evening class with my own group – The Theatre Arts Group. We’d put on productions at Toynbee Hall Theatre – later The Curtain – in Whitechaple. 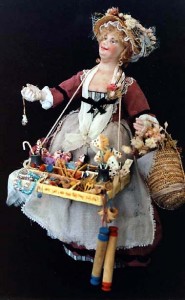 I never stopped drawing, illustrating, and sketching my two kids. When they were old enough I put a folder together and went to find Kaye Webb, the founder of The Puffin Club. Puffin was beginning to publish children’s books in paper back, and much cheaper. My kids were founder members. Kaye was putting up the summer Puffin Club Exhibition in Hyde Park – marquees and that. She saw my work even so. Immediately offered me Fantastic Mr Fox, Roald Dahl’s first English edition. Then it all started! Danny Champion of the World followed, and after that I was so very lucky to work for so many good authors, and also a lot of poetry.

As relaxation from the drawing I joined up with a sculptor friend of mine, Sukey Erland. She also had sons at the same Primary school as my children, Kate and Adam. We wanted to do vignettes of three D characters as ornamental, under glass dome sort of pieces, so they had to be small. Little by little the Dolls House world began to cross the Atlantic. Sukey and I had a few customers in the States by that time. One twelth scale became recognised over here. English Dollshouses were mainly 3/4″. The children earned pocket money by painting the dogs and cats we also made.Sukey was teaching pottery and sculpture. She taught me all I know about using porcelain. when Sukey left London and I joined up with two other friends, we became J Designs. That was the start of making for orders and shops.

I always just loved stories. I consider miniaturists are helping to make their clients’ own stories. become alive in their houses. Tipsy footmen, Snooty Dutchesses, down trodden tweenies, you name it!As I did it more and more I just knew that I had to know the person I was making to make it successful. 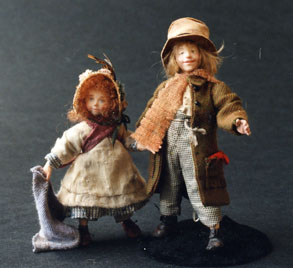 As Jill Bennett some years later, I could just please myself more. Indeed, my scene of Pip meeting Miss Haversham for the first time is exactly like a drawing in Stand Up Mr Dickens!

So, you can say that I enjoyed my orders when they came with a specific person in mind. Mostly I was allowed to make it as I saw it, which was nice.

Bit by bit my doll work overtook my drawing as commissions dropped off. Editors retired, and new ones sweep another way, and fashions change.

The only difference between illustrating a story character and making a doll is that you are the boss when you are putting it down on paper, but a doll/person is the boss when you begin on them. He/she/ tells you what to do! Not always how to do it!!

Other hobbies – I like writing. I wrote 3 Point Crimes and a few short stories – all spooky! Sculpture too comes into it. But, as you see, stories are just my thing!”

Tags:  Barbie bratz dress your doll junk doll make a doll monster high doll
This entry was posted on Thursday, March 29th, 2012 at 2:38 pm and is filed under Blog, Get Creative. You can follow any responses to this entry through the RSS 2.0 feed. You can leave a response, or trackback from your own site.