Here is another great story by our in-house artist Giovanna Bindi, a true inspiration for London Mums & kids. Come & meet her at our art club Mondays in Putney. 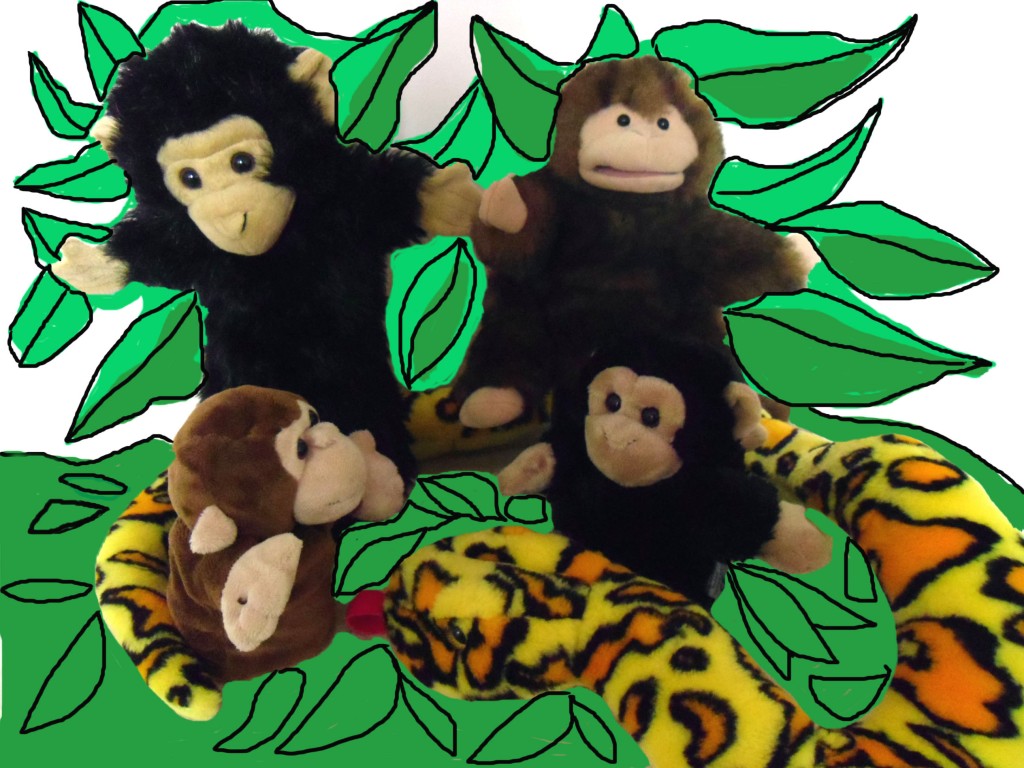 All the family liked jumping up and down the trees and play together. 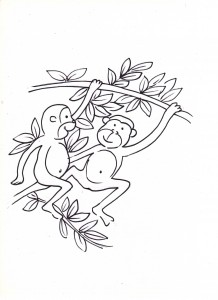 One day the boy and the girl said to their mum and dad:

‘We would like to go around the forest and see who else lives there and make new friends.’

Mum and dad were very worry and said to their children:

‘You must be very careful, not all the animals are good friends, especially the big snake, he is very dangerous and can eat you all in one bite.’

The two little monkeys went into the forest exploring and listening to the noises, the wind blowing through leaves, the water running gently in the river, the birds singing…when suddenly they were frightened by a loud noise. BOOOOOOM

‘What was that?!’, said the two little monkeys hugging each other.

A lightning came through the sky making scary shadows between the trees in the forest when another loud noise was heard again: BOOOM. After that, it started to rain.

The two poor monkeys were afraid and they run away looking for a place to be safe.

They went on the top of a tree when they heard laughing. AH AH AH AH

Another laugh was heard: AH AH AH… and a big snake appeared from behind the tree saying:

‘You must not be afraid of the storm but of me, I can eat you in one bite.’ 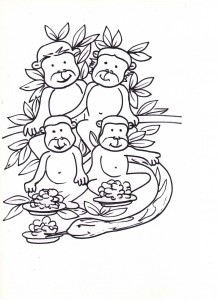 The two little monkeys screamed thinking it was the last day of their life, when the bad snake said:

‘I can save your life if you just do something nice for me!’

So the two monkeys said: ‘We can do anything you want but don’t eat us pleaseeeee!’

‘Good’, said the snake. ‘So what I really want from you is listening to you while you play music and sing a song for me. If I don’t like it I will eat you both!’

Children play music instruments singing songs but the snake doesn’t like any of them so children move quickly from one song to the next to convince the snake they are more worth alive.

No song could make the bad snake happy so the two little monkeys had a brilliant idea and said:

‘Hey Snake! Listen to the thunder and the rain…this is the best music you have ever listened and here is the song for you’. 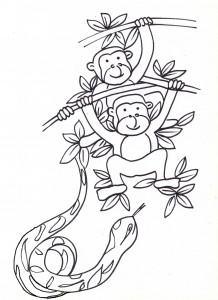 The two monkeys started to sing:

The snake was impressed by the beautiful song and he changed his mind about the two little monkeys. He decided they were going to be friends. And he was happy to take them home where mum and dad were waiting for them anxiously.

Mum and dad couldn’t believe their children were saved from the bad snake… That dinner mummy monkey added another plate on their table to celebrate their new friend.

Tags:  art club bedtime stories get creative reading storytelling the importance of storytelling
This entry was posted on Thursday, April 11th, 2013 at 9:07 am and is filed under Get Creative. You can follow any responses to this entry through the RSS 2.0 feed. You can leave a response, or trackback from your own site.