Art & Craft for kids: How to make your own Caxirola (a Maraca-type of instrument) to cheer up your favourite World Cup Team

If you have boys in the house, you may have noticed that they are already getting all excited looking forward to the Brazil Football World Cup this Summer. Let’s channel this excitement through to Footy-themed art & craft. After the success of the Vuvuzela in South Africa, the footballing nation is looking for this summer’s cheerleading instrument. Step forward the Caxirola, the official musical instrument for the big matches in Brazil. Based on the African caxixi, the Maraca-like instrument is a closed plastic basket with a flat-bottom filled with small synthetic particles. Shake it horizontally or vertically – but if you shake it vertically it makes twice the amount of noise! So what are you waiting for, get match ready by making your very own Caxirola out of empty Pringles cans. 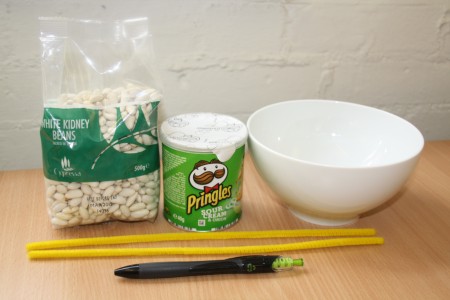 ·        x1 empty Pringles 40g Sour Cream and Onion can (ideally as they are in the green colour of the Brazilian flag as Brazil is the host country of this World Cup 2014). Alternatively any other Pringles can or another empty box, also from round tea boxes. 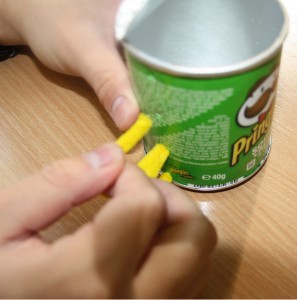 STEP 2:
·        Cut the pipe cleaners evenly in half, giving you four strands. Using one of the four pipe cleaners, poke one end into the hole you’ve just made and loop the other end around and place in the hole above. Secure in place by folding the pipe-cleaners down inside the can. Each loop should be big enough to fit your finger in comfortably.

STEP 4:
·        Poke one more hole above the other four near the rim of the lid. Then place another hole in the same position on the other side.

STEP 5:
·        Place one end of the remaining pipe cleaner in the hole you’ve just made, then loop over the top of the lid and insert in to the opposite hole, giving you a large loop.

STEP 9:
·        Get your friends round, turn the Telly on shake your Caxirola to bring the Brazilian atmosphere to your living room and cheer on favourite team to victory.

This entry was posted on Wednesday, May 28th, 2014 at 1:15 pm and is filed under Get Creative. You can follow any responses to this entry through the RSS 2.0 feed. Both comments and pings are currently closed.