UK mothers stand out across Europe, favouring pain relievers as one of their first responses to child illness

Colds and the flu are the number one infectious diseases young children have to deal with during the winter season. These infections usually come with fever, which is part of the body’s natural defence mechanism to fight against viruses and bacteria. In fact the body creates extra heat, preventing the foreign organism to survive. A child’s temperature rises and falls very quickly because the part of the human brain that controls the body temperature is not fully developed yet.
Having a sick child is stressful for any parent but in Europe mums react to child illness differently, as a new independent study on European temperature taking has revealed. 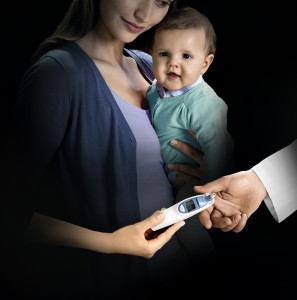 The research shows that 57.6% of UK mothers give their children pain relievers upon the onset of illness compared to the European average of just over 27%. German mums set the example with more natural methods, with only 4.2% resorting to medication. The study also suggests that attitudes towards and ways of dealing with illness vary drastically across Europe.

With adults suffering, on average, from two febrile infections a year and children up to seven, most households own a thermometer. Indeed, 64.4% of surveyed participants always or at least sometimes use a thermometer to take their temperature when they are sick. However, the female populations’ behaviours with regards to fever measurement vary from one country to another.

While over 40% of German women always use a thermometer when they are sick, 17.9% of UK mothers do not take their or their children’s temperature when they show symptoms of illness.
National differences are even more apparent with only 30% of British mums owning two or more thermometers, compared to 67% of German mums. In fact, a majority of British respondents own only one thermometer.

Methods of temperature measurement also vary largely between countries. While overall, in the ear, under the arm and rectal temperature methods are the most popular amongst the mothers surveyed, 52% of French women take their own temperature using the rectal method compared to no one in the UK and just over 9% of women in Germany. In the ear measurement, for taking a child’s temperature, however, is the only method which enjoys popularity across all countries surveyed. 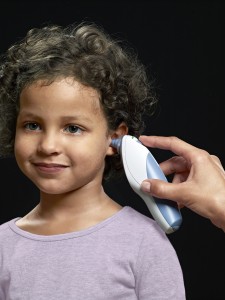 The survey highlights further national discrepancies with regards to mothers’ different attitudes towards and ways of dealing with children’s illnesses. Taking their child’s temperature with a thermometer is usually the first thing European mothers do when their child shows symptoms of illness (59% on average). UK mothers (57.6%), however, are more inclined to give their child pain relievers before even measuring their fever or calling the doctor, the latter being the second most popular reaction with French mothers (44.1%).
Dutch mothers (50.8%), on the other hand, rely on taking their child’s temperature with their hand only as the first resort.

While the study reveals that accuracy (28.8%) is important for mothers when choosing a preferred method of temperature measurement for themselves, when monitoring a child’s temperature, the result increases to 39.9%, demonstrating a real need for thermometer accuracy when taking children’s temperatures.

The research was commissioned by Kaz Europe SA, the manufacturer of Braun thermometers, and was executed by Marketagent.com from 18 to 28 August 2011. Marketagent.com conducted computer assisted web interviews of 4216 web active females via its reSEARCH platform. Respondents to the survey between 24 and 45 years were randomly drawn by quotas from the UK Germany, the Netherlands and France.

Tags:  fever health
This entry was posted on Friday, November 23rd, 2012 at 1:00 pm and is filed under Blog, Fitness & Health. You can follow any responses to this entry through the RSS 2.0 feed. You can leave a response, or trackback from your own site.