Tips to Stay Healthy While Travelling

Are you travelling for the holidays this year? Here are ten pre-boarding secrets, culled from frequent fliers, on what to do to protect yourself from colds, flu, and other ills. Advice from exercise expert ICON Health and Fitness, which can be found on Twitter @iFitLiveUK. 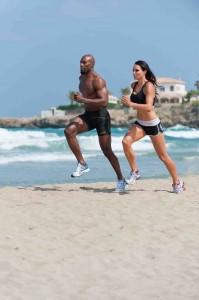 The chances of reliable, frequent beverage service aren’t high these days, unless you’re lucky enough to fly business class. Yet getting and staying hydrated before and during your flight is the best way to protect yourself against getting sick. That’s because lack of humidity in the pressurized cabin dries out mucous membranes, making it harder for your system to flush out germs.

What to do: Although you can’t bring liquids through security, you can bring an empty bottle. Fill it at the water fountain as soon as you’re through, and then drink up and hydrate before you fly—and during the flight. Once on the plane, don’t be shy about asking the attendant to fill your bottle for you. Even if they’re not coming through often with the cart, there’s water in the back.

2. Use the restroom before boarding—with caution.

Most people know not to touch a public toilet seat any more than necessary, but it’s less well known that flushing also transmits germs. And the closer you stand to the toilet, the more you’re in the “line of fire.”

Researchers studying this problem measured the microorganisms in the air and on nearby surfaces after the first and subsequent flushes and found that “large numbers of microorganisms persisted on the toilet bowl surface and in the bowl water, which were disseminated into the air by further flushes.”

What to do: Use a public restroom before you board and onboard restrooms as infrequently as possible, since it’s impossible to stand more than a couple of feet away. Close the lid before flushing, using a paper towel between your hand and the lid and handle. And wash your hands thoroughly after flushing, using a paper towel to turn off the faucet.

Studies show that lack of humidity in the enclosed space of the airplane cabin is one of the primary reasons for the higher risk of getting sick while flying. When your eyes are dry, it’s more tempting to rub them, but touching your eyes is one of the primary means of transmitting cold and flu viruses. If you have germs on your hands, they can travel through the tear ducts to the nasopharynx at the back of the throat, where cold viruses do their damage.

What to do: Wash your hands frequently and thoroughly and avoid touching your eyes. If you wear contact lenses, remove them before boarding (after washing your hands) and wear your glasses on the plane. Never let yourself fall asleep with your lenses in, as your eyes will become even drier that way.

4. Pack a blanket and pillow.

Few airlines provide blankets anymore, and the ones they do offer can harbor germs. In fact, during the H1N1 flu scare, several airlines removed all blankets and pillows from flights as a precaution against cold and flu transmission.

What to do: Carry a light, foldable blanket or shawl in your carry-on, or dress in warm layers. Keep a neck pillow in your carry-on, too; if space is an issue, purchase an inflatable one. Using your own pillow not only helps you sleep germ-free but can also save your back and neck from pain. If conserving space is a priority, bring your own pillowcase and put it over the pillow provided.

5. Eat a healthy meal before you board.

The deadly bacteria listeria (recall the outbreak involving contaminated cantaloupes in the summer of 2011) was detected in samples from a kitchen floor and cockroaches, ants, and flies—both alive and dead—were found in the facility. LSG Sky Chefs wasn’t alone; the FDA has found unsanitary and unsafe conditions in many of the catering operations that provide food to airlines in the last two years, according to a USA Today survey of inspection reports.

What to do: Bring your own food, or choose healthful alternatives at airport restaurants. Luckily, airports all over the country have been adding restaurants with a healthy focus, and even standard fast-food joints are offering healthy choices. Choose dishes with plenty of vegetables and lean meat. As a bonus, you’ll sleep better after a good meal.

Yes, that airport lounge looks like a comfortable place to while away a layover, but skip the alcohol and you’ll arrive with a much greater chance of staying healthy. Many people don’t realize that alcohol is extremely dehydrating, so drinking prior to or on a flight, combined with the low cabin humidity, lowers your resistance to cold and flu germs.

Heavy drinking also suppresses the immune system. In fact, recent studies have shown that people who drink several alcoholic drinks a day are more prone to infections and illness.

What to do: If your goal is to avail yourself of the camaraderie—and large TV—in the airport bar, order a seltzer water or soda instead of alcohol. If your reason for drinking is to relax and sleep, there are healthier alternatives, such as taking melatonin or a sleeping pill or drinking chamomile tea. Most sleep aids take about an hour to work, so take your remedy of choice about 30 to 60 minutes prior to boarding.

Air pressure changes during flight, particularly while ascending and descending, make many people’s ears hurt, a condition known as “airplane ear.” It happens when the Eustachian tubes that drain the ears fail to regulate the pressure on the eardrum, preventing it from vibrating as it should and causing pain. Some people are more prone to the problem than others, and being even a little bit congested makes it much more likely to occur.

What to do: Activating the muscles in your jaw helps open up the Eustachian tubes, so pack gum and hard candy so you have something to suck or chew during takeoff and landing. Yawning and swallowing also helps relieve the pressure. If you have this problem frequently, invest in filtered earplugs, available over the counter at large drugstores, which work to gradually equalize the pressure on your eardrums. If you’re prone to severe airplane ear and you fly often, talk to your doctor about ear tubes, which are surgically implanted to drain fluid buildup and equalize the pressure between the outer and middle ear.

The air at altitudes of 30,000 to 35,000 feet, where most commercial airlines fly, is extremely dry, and the recirculation systems used in airplane cabins dry the air out even more. The lack of humidity sucks moisture from the tissues of the nose and mouth, compromising the body’s natural defense system. And if you’re already congested from allergies or a cold, the problem is even more acute, according to the Mayo Clinic.

What to do: Stock your carry-on with a bottle of nasal saline spray, and use it before you fly to irrigate and moisturize the delicate membranes inside your nose. If you have a cold, take an oral decongestant about 30 minutes before boarding. If you have allergies, take your allergy medication an hour before flying. The anti-nosebleed home remedy of moisturizing the nostrils with petroleum jelly or Neosporin also works to keep tissues from drying out.

9. Include yogurt in your preflight breakfast.

Yogurt is cultured with lactic acid, differentiating it from other dairy products by the presence of beneficial probiotic bacteria that strengthen the digestive system and the entire immune system. One study found that eating a cup of low-fat yogurt a day reduced susceptibility to colds by 25 percent, and other research has shown that the beneficial bacteria may help the immune system resist other viruses.

What to do: Stock up on a brand of yogurt that contains plenty of live cultures, and eat yogurt every day for a few days before you fly. A drinkable yogurt, also known as kefir, makes a super-healthy and convenient preflight or in-flight snack. Or stop at an airport coffee stand and buy a “parfait,” which contains yogurt, fruit, and granola. Frozen yogurt isn’t really a substitute, unfortunately, because many commercial brands are heat-treated, which kills the healthy bacteria. If you really dislike yogurt or can’t eat dairy, take a probiotic supplement, but remember to refrigerate it to preserve the live cultures.

10. Boost your immunity before you fly.

Although there’s little scientific evidence to support the effectiveness of some supplements advertised as cold and flu preventives, some small studies suggest a degree of benefit from vitamin D and echinacea.

What to do: The best way to boost your immunity is to eat a diet rich in fruits and vegetables, especially dark leafy greens like kale and brightly colored fruits such as berries.

In the picture: fitness experts Jenny Pacey and Wayne Gordon.

Tags:  fitness travel travel with children Travel with kids
This entry was posted on Wednesday, July 4th, 2012 at 9:45 am and is filed under Blog, Fitness & Health, Travel with kids. You can follow any responses to this entry through the RSS 2.0 feed. You can leave a response, or trackback from your own site.