Singing for your health By Deborah Hudson, leading voice coach and author

According to Prof Steven Mithen, of Reading University, Neanderthal man communicated via sound songs long before he could speak language. You can bet your life that one of those songs would have been a lullaby. 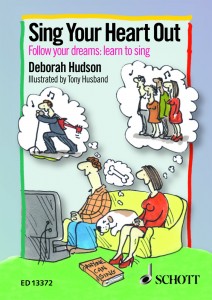 Songs sung to babies have been around almost as long as babies have and it’s a simple, but incredibly effective way to bond. Babies first start to hear at around 20 weeks, so by the time they are born they are used to the mothers’ and fathers’ tones of voice. Hearing those same tones used in song is very reassuring for the child and it’s easy to do. There are lullabies which have no words but are just tunes sung on a single vowel sound with the odd consonant thrown in for effect.

According to Ted Gioia, the author of Healing Songs, it’s the intention behind the song which makes them work. So why not make up your own? You can use a simple tune and then add a few words to describe what is happening. Thus you can invent songs to sing not just for going to sleep but for nappy changing, feeding, etc and fathers too can develop their own special songs. Grandparents can sing the songs they know and thus keep the traditional songs going from generation to generation.

This is important for transmitting a sense of who we are and where we come from. This is particularly true where backgrounds have changed: it’s good to hand something down from a previous culture and thus to keep it alive.

Babies learn to formulate language through hearing the rise and fall of the voices around them. Those who have been sung to, especially face to face, learn just that little bit quicker. Singing is good for the health of the singer too! Mothers will find that the low, diaphragmatic breathing is very good for toning the belly.

This deep breathing technique increases in the intake of oxygen around the body, reducing stress and raising happiness levels. All mothers need support to do what seems natural to them – singing is one of those things.

Singing groups are a good idea for shyer mums; older brothers and sisters can be encouraged to sing to the baby as was traditional up until the last century. Singing together allows the whole family to bond with the baby, not just the main carer. It’s free and it’s one of the greatest pleasures in life – do it!

AUTHOR: Deborah Hudson’s “Sing Your Heart Out” (Ill. Tony Husband) is published by Schotts Music at £4.99

This entry was posted on Friday, May 27th, 2011 at 9:15 pm and is filed under Baby & Toddlers, Blog, Fitness & Health, Parenting Skills. You can follow any responses to this entry through the RSS 2.0 feed. You can skip to the end and leave a response. Pinging is currently not allowed.