PEDAL ON UK COMPLETED 1,000 MILE TOUR OF COMMUNITIES ACROSS THE UK

1,000 miles, 35 communities, 4 countries, countless volunteers and celebrity supporters – Pedal ON UK has finally crossed the finish line of its three week tour of the UK to celebrate the extension of more than 80 new walking and cycling networks across the UK. 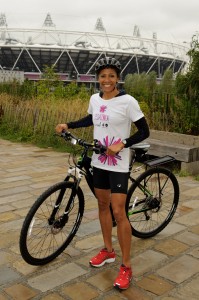 Organised by charity Sustrans that’s enabling people to travel by foot, bike or public transport for more of the journeys we make every day, and backed by the Big Lottery Fund’s ‘Keeping the Spirit of 2012 Alive’ campaign, Pedal On UK have crossed the length and breadth of the country on two wheels to showcase the success of the numerous projects and how they have benefited their communities.

Launched at the Olympic Park in London on 16 August 2013, Pedal On UK has hosted 19 events in cities including Southampton, Bristol, Birmingham, Belfast, Newcastle and finally in Glasgow on Saturday 7th September.

The campaign has enjoyed the support and company of celebrity cyclists, Dame Kelly Holmes and Downtown Abbey star, Jim Carter who are keen cyclists and supporters of the extension to the networks into communities.

“Over the past few years cycling has become my main form of fitness training for me. I live in the country and there is nothing better than riding around exploring the area and soaking up the atmosphere.”

“I just love the feeling of freedom cycling gives you, and it is a nice change and relief from the pounding on the streets you get with running. I am looking forward to seeing more people taking up cycling across the country as a result of this event”.

“We are proud to have brought Pedal On UK into the heart of communities across the UK this summer. There are many hundreds of miles of safe cycling and walking routes on people’s door steps, so we hope this event will have raised awareness of them. It’s been a great chance to get the whole community together to have some fun.

With more than four million people living within a mile of these networks, people of all ages and abilities can now get around their communities more easily.”

This entry was posted on Wednesday, September 11th, 2013 at 2:15 pm and is filed under Fitness & Health. You can follow any responses to this entry through the RSS 2.0 feed. You can leave a response, or trackback from your own site.