A CANCER RESEARCH UK study reveals for the first time that glitzy and glamorous cigarette packaging makes children susceptible to smoking – tempting them in to a habit that kills half of all long term users. The research is published in the journal BMJ Open. 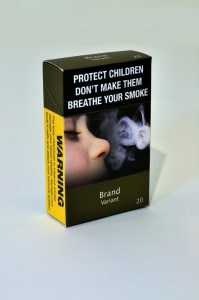 The results are further proof that the UK government’s decision not to protect children from the tobacco industry’s marketing practices risks harming the UK’s public health legacy. The government claims it wishes to wait and see the impact of similar moves in Australia – where the weight of evidence led to the introduction of standardised packaging last year.

During this delay the tobacco industry is reaping the benefits of slickly designed packs that help to recruit new smokers. Nearly 570 children under-16s start smoking in the UK every day.

In the new study, researchers at the University of Stirling examined the reactions of 1025 UK children aged 11-16 who had never tried smoking. They were given three different types of cigarette packs: regular, novelty and standardised packs.

Novelty packs were those with an unusual shape, colour or system of opening, and included a slim ‘perfume’ type pack and a pack in the shape of a giant lighter. Standardised packs were brown packs of a uniform shape with all branding removed apart from a brand name.

Alarmingly children who liked these packs were the same children who said they were more tempted to smoke – for example those receptive to the Silk Cut pack were over four times more likely to be susceptible to smoking than those who were not receptive to this pack.

In contrast plain, standardised packaging reduced the appeal of smoking to the children.

The study adds further weight to Cancer Research UK’s ongoing campaign to remove all attractive and stylish branding from tobacco. Glossy designs add to the deadly allure of cigarettes. Standardised packaging would remove this and increase the impact of picture health warnings.

Smoking causes more than eight out of 10 cases of lung cancer, and over 100,000 tobacco-related deaths every year. Starting smoking at a young age greatly increases the risk of lung cancer.

Professor Gerard Hastings, Cancer Research UK’s social marketing expert at the University of Stirling, said: “This research continues to build the case to protect vulnerable children from the might of the tobacco industry’s marketing. The UK must follow the lead of Australia and introduce plain, standardised packs as soon as possible.

“Meanwhile we mustn’t overlook the likelihood of the tobacco industry to seek new marketing opportunities within the pack, and to develop soft looking and special coatings to sex-up packs. The tobacco industry is desperately turning to any measures available to peddle its products and secure profits from the smokers of the future. We must act now to deglamorise this deadly habit.”

Dr Harpal Kumar, Cancer Research UK’s chief executive, said: “This study provides further evidence that the more attractive the tobacco packaging, the more likely children are to be tempted to light up their first cigarette – the first step to a deadly addiction which will kill half of them if they become long-term smokers.

“The government must protect children from the lure of sophisticated marketing and show its priority is the health of young people, not the profits of the tobacco industry. We urge the government to introduce plain, standardised tobacco packaging to reduce the number of young people who take up smoking.”

On Monday 8 October 2013 the European Parliament will vote on revising the EU Tobacco Products Directive which includes measures to ban innovative-shaped tobacco packs.

This entry was posted on Friday, September 27th, 2013 at 10:00 am and is filed under Fitness & Health. You can follow any responses to this entry through the RSS 2.0 feed. You can leave a response, or trackback from your own site.