You may or may not be aware that I love FENCING as a sport. I started practising sword fighting 2 years ago at the ‘young’ age of 40. What I love the most about this sport is that you can keep practising it until you are very old as it is not aerobic hence not hard on your heart. It keeps you fit without even feeling the pain of exercising as your mind is too busy working out the best strategies to hit your opponents. It’s not a violent sport at all. Quite the opposite it teaches you to respect your competitors and adopt the cavalry rules from salutes to recognising your faults. Exceptional sport.

Fencing could be the sport to interest your child if they haven’t yet found their favourite. It’s a bit unusual and they effectively get trained to fight like a Muskateer! Don’t worry, though, foam or plastic foils are used for children and beginners. Fencing is fast and athletic but it also trains your mind to think ahead.

www.britishfencing.com describes the sport as being like ‘active chess’. Most clubs will have a hiring facility so you can try out the sport before buying all the equipment.

A new version of magical adventure film Neverland is out now featuring lots of kids fencing. How gracious!

Here are some really great clips which are also educational on the sport of fencing and very interesting indeed! In this footage kids are learning how to fence just as Peter Pan does in the film. 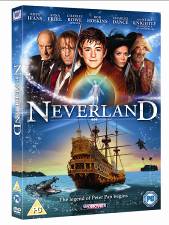 We haven’t seen the film yet but the new Neverland movie is set to become a success.

Tags:  children DVD reviews fencing film reviews london 2012 Neverland olympic games olympics Peter Pan sword fighting
This entry was posted on Thursday, May 31st, 2012 at 9:10 pm and is filed under Blog, Fitness & Health. You can follow any responses to this entry through the RSS 2.0 feed. You can leave a response, or trackback from your own site.