Many of you will have heard of Zumba® Dance Fitness by now, but did you know that there are 7 other ways we can all enjoy Zumba®, which include sitting, being in the water, using weights, so that all age ranges and fitness/physical abilities can take part? 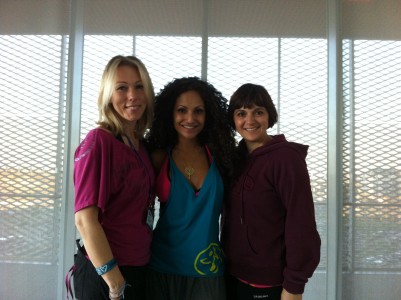 Zumbatomic® is just one of these branches of Zumba® which is designed specifically for kids (ages 4-12).

It’s a high-energy, fun fitness party with specially choreographed, kid-friendly routines to all the music kids love such as hip-hop, reggaeton, cumbia and pop. 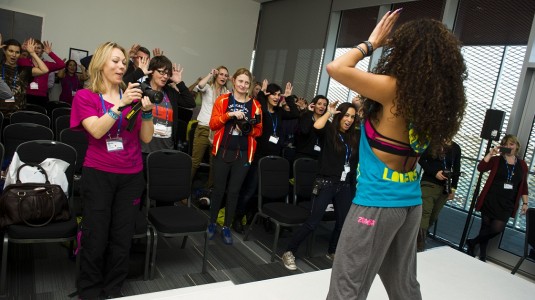 As a Zumba® & Zumbatomic® instructor, I was excited to meet the lovely Gina Grant from the U.S. Zumba.com at the London ZIN convention in February 2012 on behalf of the London Mums magazine and the equally lovely Akile Alexander from ‘Latin Vibes’ in North London at the Zumbatomic® demonstration at Harrods a couple of weeks ago with the aim to find out more information on this new, young dance fitness phenomenon.

G: Well, yes, with the younger ones but I find I have to tailor the dances to include the boys if there are more as they seem to like rap, break-dancing, doing ‘the worm’ on the floor, that kind of thing. 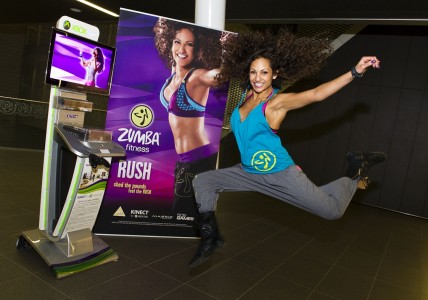 ZF: I think it’s fair to say that most of us mums find it a battle to juggle kids, work, home-life and then throw in some exercise on top. Now, you’re a mum of 4 and you seem to be able to do all this effortlessly and without losing your mind. Really, how?

G: (laughs) Well my week definitely varies based on my work & travel schedule but I have a great support system at home. When I’m travelling, it’s their time with their father so I try to plan my travel around that. It’s taken years of modifying but I now just really try to make my time with them count and focus on them and normal family life when I’m not working.

When I’m home I try to be fully engaged, you know, with their homework or going to their sports events, school stuff. They’re all very busy these days.

ZF: Where do you all live in America?

G: The Bay Area in California.

ZF: Have you had a chance to enjoy any of the sights of London while you’ve been here?

G: Unfortunately no, I’m leaving on Monday so that I can get back to the kids. 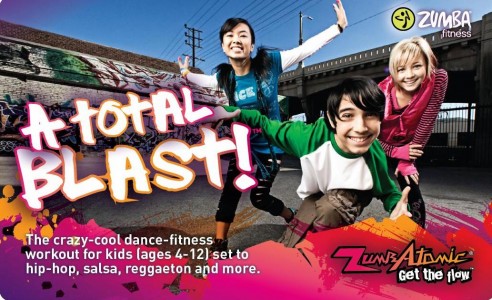 ZF: Do your kids enjoy Zumbatomic®?

G: Oh yeh, the girls do and they help me come up with new, fun choreo. Their input’s very helpful!

ZF: Were you a dancer by training?

G: Well, I learned Jazz and street dance but not ballet. But I’ve always loved dance. I discovered Zumba® by going to Beto’s classes after the birth of my 3rd child and became more and more involved since then.

ZF: What do you think he said?

G: Oh no! Not fair! Both! I loved them both. Great music in Grease, fabulous dancing in Fame. 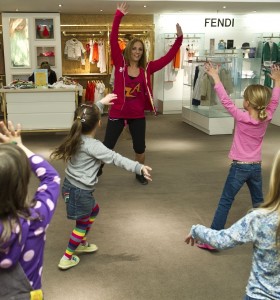 The minute the music started to pump, Children (and parents) gathered round and Akile managed to enthral the audience with her easy to follow dance moves. Within moments, the kids were dancing along and happy smiles filled the room.

I asked Akile what the differences are between Zumba and Zumbatomic:

ZumbaFunk:     What’s been the response by kids and parents to Zumbatomic?

Akile:                  Its been fantastic – most of them are just pleased to be able to get the kids up and active and for many of them its something parent and child can enjoy together.  We have also been hosting Zumbatomic birthday parties, so parents are thrilled with the variety.

ZumbaFunk:     Tell me, what are the benefits to kids by taking regular Zumbatomic classes? 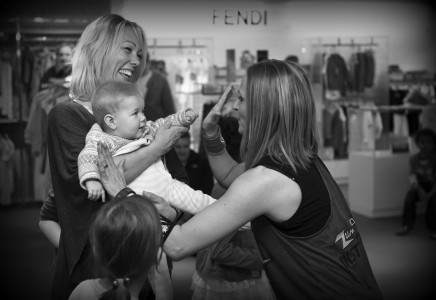 Akile:                  First and foremost, it keeps them active. It works towards a healthier lifestyle, confidence, coordination and social skills.  Now that its available on games consoles like the Wii and Xbox, they are not in a sit position all day, instead they are up and having fun

ZumbaFunk:     How would parents or carers find a Zumbatomic class near them?

Akile:                   For a National or International search of a class local to you, log on to Zumba.com, through this you’ll find Zumbatomic classes near you.

Read our exclusive interview with Zumba founder Beto in the London Mums magazine.

Rebecca is a Zumba Instructor. For information on Zumba® or Zumbatomic® classes in SW London, you can also contact ZumbaFunk on 020 3286 4484. http://www.zumbafunk.com/

Tags:  beto gina grant zumba zumba classes zumba fitness zumba queen zumbatomic
This entry was posted on Thursday, April 26th, 2012 at 3:38 pm and is filed under Blog, Fitness & Health, Mumpreneurs & Mums at work. You can follow any responses to this entry through the RSS 2.0 feed. You can leave a response, or trackback from your own site.