Leading first aid charity, St John Ambulance, has revealed shocking new research showing over half of parents (55%) lack the skills necessary to save their child in the event of a life-threatening accident. To raise awareness and encourage more people to learn basic first aid skills, St John Ambulance has launched a powerful new film, from the award-winning director behind the John Lewis commercials. 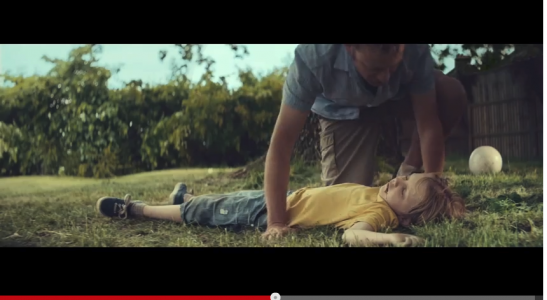 In the film, a boy and his father play in a garden as the mother seemingly looks on through the kitchen window. The boy climbs a tree but a branch breaks and he falls to the earth with a sickening thud. The shocked mother runs out of the kitchen as we hear that she is a St John Ambulance volunteer, with the first aid knowledge to save lives.

But as she reaches the garden we realise she has no connection to the father and boy after all and has rushed out to take her washing in from the rain…meanwhile in the empty park the boy is unconscious with the dad screaming for help, as viewers are implored to find out how to save the boy.

Viewers are urged to visit www.sja.org.uk/savetheboy to learn the first aid needed to ensure he stays alive. These are the basic first steps required in any first aid emergency.

The research commissioned by St John Ambulance also found that when faced with treating someone for a fall – the same situation as the one in the film – the majority of parents would not know the correct way to help the boy. Despite 65% of parents claiming to know basic first aid, over half of those surveyed (57%) said they would leave the boy until an ambulance arrived, which would not be the correct procedure.

Sue Killen, St John Ambulance Chief Executive, said: ‘It’s devastating to find that over half of parents wouldn’t have the first aid confidence to save their own child’s life. And it’s not just parents. Over two-fifths (41%) of people admit that it would take something as severe as the death of a loved one to make them learn first aid.

‘Unfortunately, our volunteers can’t be everywhere so we’ve developed an online experience to help more people be the difference between a life lost and a life saved. We don’t want anyone to be helpless in a first aid situation especially when learning life saving skills is so simple.’

The film continues St John Ambulance’s hard-hitting new direction. Their last campaign, Helpless, compared a lack of first aid with cancer showing up to 140,000 people die each year in situations where first aid could have helped save their lives, which is as many as die from cancer.* The campaign ultimately encouraged tens of thousands of people to learn first aid and saved four lives.

*In England and Wales, using Office of National Statistics death registration data, 2010. Up to 140,000 die each year in situations where first aid could have given them a chance to live. For cancer, 138,000 people die each year.

This entry was posted on Monday, September 16th, 2013 at 4:20 pm and is filed under Fitness & Health. You can follow any responses to this entry through the RSS 2.0 feed. You can leave a response, or trackback from your own site.