COWBOYS & INDIANS DEFEAT COMPUTERS WHEN IT COMES TO PLAY TIME

New research shows that ‘pretend play’ is the defining childhood activity of the last 50 years, uniting the generations.

The research, which was carried out by Sainsbury’s Active Kids scheme among children and adults across the UK, examined the favourite childhood activities of each generation from those born from 1940 onwards.

Beating off competition from computer games and the latest bikes, ‘make believe’ surprisingly topped the table of preferred activities for today’s kids, suggesting that the old favourites are as popular as ever when it comes to play.

The key stats at a glance are as follows:

· Nearly a third of adults spent more than 20 hours playing each week during childhood. 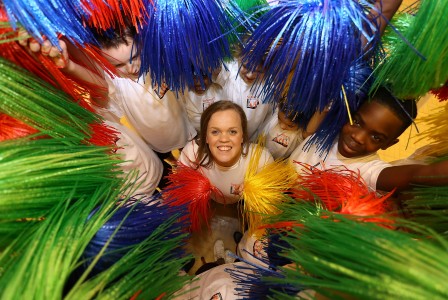 The research has been launched to coincide with Sainsbury’s Active Kids scheme scheme, which is backed by Active Kids ambassadors David Beckham and Ellie Simmonds.

Whether it’s Cowboys and Indians or dressing up as a princess, it seems ‘make believe’ is the childhood activity that unites the generations. Those born between 1950 and 2000 all selected pretend play as their favourite childhood activity, beating other child classics such as hopscotch, hot potato and hide and seek.

When it comes to today’s children, it seems things haven’t changed over the last 50 years. While nearly a third of adults (29%) think their children prefer spending time playing on a computer, in fact kids are following in their parent’s traditional footsteps as the majority (22%) say ‘make believe’ is their favourite past time, compared to just 15% that preferred spending time at the computer.

It seems fresh air is also key for the kids of today, with two thirds of children (64%) saying they enjoy playing outside even in the rain.

In fact, over a fifth (21%) of adults said they spent more than 20 hours playing each week when they were children, but just 7% thought their own children invest the same amount of time in play. According to adults, the majority of today’s children (29%) spend between 1 and 5 hours on active play each week.

The research has been launched to coincide with Sainsbury’s Active Kids scheme, an initiative which has so far put over 4.9 million pieces of equipment into the hands of millions of children across the UK. Backed by Active Kids ambassadors David Beckham and Ellie Simmonds, Sainsbury’s is also working with Sport England to extend the Active Kids scheme to include to disabled young people. That means more young people than ever before will have the chance to benefit and get active.

Tags:  children in sport fitness sport
This entry was posted on Tuesday, February 26th, 2013 at 10:00 am and is filed under Fitness & Health. You can follow any responses to this entry through the RSS 2.0 feed. You can leave a response, or trackback from your own site.