Are we driving round in a breeding ground for germs? The dirtiest areas of the car now revealed

Could you and your family be driving round in a breeding ground for germs? A new experiment, conducted by UK-based personal car leasing specialists ZenAuto who surveyed 2,000 people in the UK, has revealed the dirtiest areas of your car. Twelve areas of a car were tested using swabs and agar filled petri dishes. The vehicle was used for both commuting and social purposes. After 5-days of monitoring the germ growth, the driver’s footwell followed by the car boot proved to be the worst offenders. Despite being revealed to be the dirtiest area of the car, a quarter of UK adults (25%) admitted they would retrieve and eat food they had dropped in to the footwell. 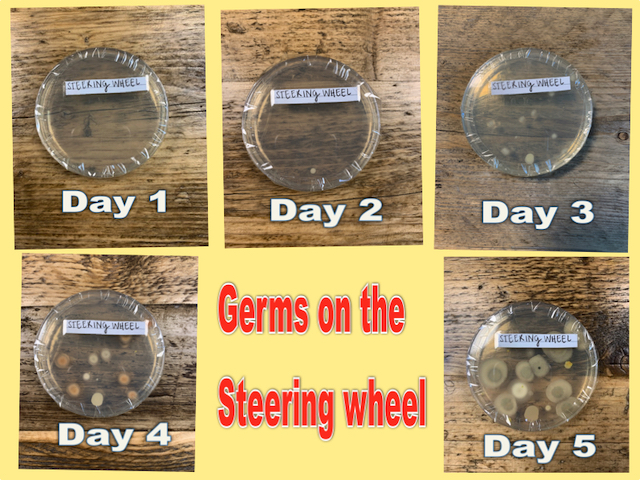 Owing to our increasingly busy work and social lives, many UK drivers fall into the habit of forgoing a regular deep cleaning schedule for their vehicles, but a new study highlighting hidden germs in our cars may make you think twice about keeping on top of your vehicle’s cleanliness.

The experiment, conducted by UK-based personal car leasing specialists ZenAuto, swabbed twelve areas of a car which is used for both commuting and leisure purposes, with agar filled petri dishes. The samples were then sealed and left to thrive for a period of five days in order to find out where bacteria was most likely to thrive.
The results for each section of the vehicle were then visually compared in order to rank and determine which areas of the car are the most germ-ridden.

The petri dishes showed that every area tested showed signs of germ growth over the five-day period, with some proving to be significantly worse than others. However, it was the driver’s footwell, followed by the car boot, which proved to be the worst offenders.

Most bacteria-ridden areas of the car:

A survey, also run by ZenAuto for the purposes of this study, the majority of UK drivers admit they will only clean both the interior and exterior of their vehicles every couple of months at best (35% and 37% respectively).

Despite being revealed to be the dirtiest area of the average car, a quarter of UK adults admitted they would retrieve and eat food (such as crisps or sandwiches) that they had dropped in to the footwell of their vehicle; something which could have potentially negative implications on our health thanks to the unseen germs and bacteria that could be growing there.

Whilst not illegal, eating and drinking when driving should be avoided as it could land you with penalty points and a fine due to the distraction it could cause. This aside, if you’re driving around family members, and especially young children, they can all contribute to the build-up of germs and bacteria in a vehicle, so experts advise regular cleaning both inside and out.

Following the results of the test, Dr Asif Munaf, medical doctor and founder of wellness company, Endorance, shared his advice around the importance of cleaning our vehicles regularly; “In terms of cleanliness of cars, we should aim to wipe down our dashboards, seats and steering wheels with wet cleansing wipes at least once a week; vacuum clean every 2-4 weeks; and valet clean every 2-3 months.

“The effects of not doing this can range from worsening of dust allergy and allergic rhinitis, all the way to skin infections and worsening of asthma. There can be eye and sinus infections as well as chest infections especially when the radiator is not cleaned.”

Vicky Kerridge, Head of Consumer Experience at ZenAuto, commented on the findings:

“Everyone has the best of intentions when their shiny new car arrives – after all, it’s exciting, you’ve spent your hard earned cash on it, and it has plenty of new gadgets to make your commute a dream, but despite this, it’s all too easy to let things slip when life gets hectic.

“Even the would-be Mrs Hinch’s among us can have an off day or two, and before you know it all of those crumbs from the occasional school run snack have started to multiply by their own volition, as our germ experiment shows all too well.

“However, our research also highlights that a nice clean car is good for you and can actually have a negative impact on your health if you allow the germs to grow. So, make sure you plan in regular deep cleans, dig out that anti-bac and steam clean your upholstery to ensure a happy, healthy car – and you!”

ZenAuto is a leading UK car leasing business that allows the consumer to choose exactly the car they want from all the major makes and models, the term they need and the perfect spec of the vehicle, right down to the last detail (allowing for complete customisation of the car). Operating from headquarters in Leeds and owned by Zenith who have been leasing fleets of cars to big businesses for the last 30 years. ZenAuto launched in March 2018 bringing a flexible, highly customisable way of financing access to a brand-new car in the UK.

This entry was posted on Tuesday, March 3rd, 2020 at 4:55 pm and is filed under Fitness & Health. You can follow any responses to this entry through the RSS 2.0 feed. Both comments and pings are currently closed.