Why Our Addiction To Sugar Is All In The Mind

CUT your daily sugar intake by half! That was the advice recently from the World Health Organisation, which woke up belatedly to the planet’s mounting weight problem. But how much is half? Trying to find the answer to that is so exhausting you might need a cup of hot sweet tea afterwards! 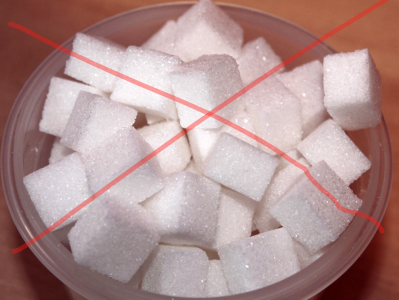 I did a very unscientific survey among friends and their guesses of what the  new suggested limit should be ranged from 50 grams a day to 100 grams. No one even got close to the correct answer, which seems to be about 25 grams.

I say “seems to be” because even the newspapers got in a muddle. The Telegraph said the new limit was seven teaspoons a day while the Mail said it was five. They were both right – it’s seven for a man and five for a woman. Approximately.

However, thinking in terms of spoonfuls is unhelpful because people then tend to gauge their sugar intake by what they add to hot drinks or breakfast cereals. In fact, most of our sugar is consumed in cakes, biscuits and fizzy drinks. For example a can of Coca Cola contains 35 grams. Here’s more bad news: Sugar can also be found in foods you might assume are sugar-free, such as tinned chilli and ready-meal noodles.

Those who say people should show self-control and eat less, or those like the Chief Medical Officer who say we should tax sugar to drive down consumption, are missing the real point: addiction to sweet tastes is a problem of the mind.

Fifty years ago, food scientists discovered that corn could be turned into high fructose syrup that was 20 per cent sweeter than sugar and a third cheaper. Today fructose is in everything from ketchup to burger buns, from processed meals to pizza toppings. Most of all it’s used in fizzy drinks like Coke and Pepsi.

The problem is that fructose plays havoc with the appetite by suppressing the natural hormone leptin, which is supposed to tell the brain “You’ve had enough, you can stop eating now.” So because your brain’s fuel gauge has been disabled, you keep filling up – with disastrously predictable consequences.

Dr Robert Lustig, of the University of California, explains: “Fructose makes the brain think you’re starving, even when you’ve just eaten. Food manufacturers know the sweeter they make it the more you will buy.”

At Thinking Slimmer we employ various neuroscience techniques to alter the brain’s reward system so that the pleasure no longer comes from burgers, chocolate or sugar but from making healthier choices.

We are also able to reverse the leptin suppression caused by fructose by sending a “full” signal through a person’s neuro-circuits so they eat less and usually leave a little on their plate. The power of the mind to affect our bodies in this way has been proved by Dr Tony Goldstone, of the Imperial College Faculty of Medicine.

By scanning the brains of people who are being shown photographs of high-calorie food such as chocolate cake or pizza he can see which parts of the brain are being activated. “High sugar foods activate the brain’s reward system,” he says.

“What food looks like, smells like, tastes like, sounds like and even its crunchiness all influence the brain’s reaction. These factors combine in the brain to influence whether we reach out and buy something or choose it in the shop or restaurant. This is what the food industry spends a lot of time developing.”

We should ask ourselves what would be the most effective way of cutting down our sugar intake: taxing people who buy processed convenience food and drink gallons of Coca Cola or passing laws which would force food manufacturers to cut down on the hidden sugar they sell to us?

Since the multi-billion pound food industry carries a lot more clout than consumers there’s no prizes for guessing the answer. After all, a teaspoon of sugar helps the profits go round.

Sandra Roycroft-Davis, founder of ThinkingSlimmer.com, is a Harley Street behavioural change specialist. Thinking Slimmer is a world leader in the use of unconscious persuasion to help people change their lifestyle and lose weight through its unique Slimpod downloads.

Sandra qualified as a cognitive hypnotherapist at the Quest Institute and is an NLP Master Practitioner. She has spent years studying the psychology of eating and weight control and has lectured to American university students and recently spoken at weight loss seminar in the House of Commons.

This entry was posted on Thursday, March 27th, 2014 at 1:00 pm and is filed under Fitness & Health. You can follow any responses to this entry through the RSS 2.0 feed. You can leave a response, or trackback from your own site.