Six glorious weeks of freedom might sound like a dream come true, but research from weight management company, MoreLife, reveals that the school holidays are turning into a very real nightmare, posing a serious health risk to 4.3 million children across the UK. 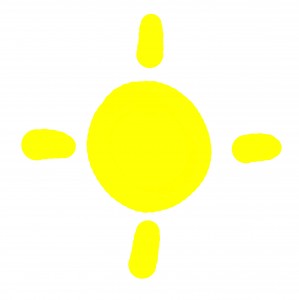 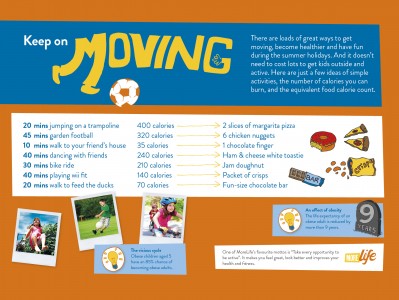 A third of British children (33%) will fall victim to ‘Summer Sofa Syndrome’ this year, with some putting on up to half a stone during the summer holidays, as a result of inactivity and hours spent slumped on the sofa. For many these extra pounds are a lifetime weight gain and may never be lost.

Adding a few extra pounds to a child’s small frame can result in him/her being at risk from a number of life-shortening health problems including diabetes, fatty liver disease, some cancers and even depression.

According to MoreLife, weight gain during the summer holidays can be attributed to a number of factors:

Children sleep longer than on school day, an average of 10 hours

The result in inactivity and free reign of food results in children potentially consuming an additional 18,000 calories over the summer holidays, which is the equivalent of 215 chocolate digestive biscuits 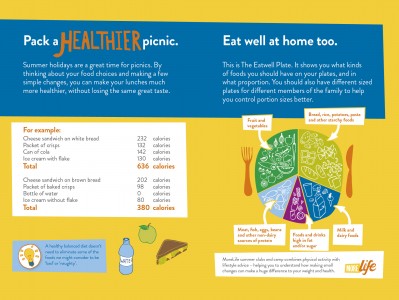 School provides a strong structure for children for 36 weeks of the year, specific meal times and physical activities are set out as part of the curriculum, though once the holidays come around it’s easy for this structure to collapse.

Whereas in years gone by children spent their summers playing in parks, climbing trees and discovering new cycling routes, only 29% of today’s kids are experiencing these outdoors adventures. Today’s youth are given limited options due to stricter parental controls which means they are confined to the home resulting in an increase of sitting on the sofa with films and video games or taking to the net for a far less active type of surfing. 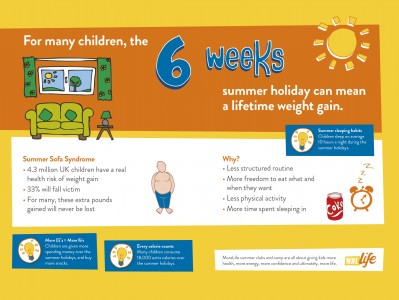 It’s no secret that the UK is Europe’s fattest nation, with the Government furiously working on plans to tackle the obesity epidemic that has spread so relentlessly in recent years. There are now 4.5 million overweight children in Britain, 2.8 million of which are obese – a figure that has tripled over the last 30 years – if things continue in the same vein, by 2050, 70% of girls and 55% of boys may be overweight or obese.

The only Professor of Child Obesity in the UK and founder of MoreLife, Paul Gately, commented: “Summer Sofa Syndrome is a serious problem, many children are consuming the equivalent of 18,000 extra calories during the course of the six-week break, which is 3000 a week and accounts for eating an extra 36 chocolate bars over the school holidays! It’s not just overweight children that are at risk of becoming obese, normal rate kids are at risk of gaining weight as well with 6% reduction of fitness during the school holidays.

“£35 billion a year is spent on obesity related illnesses, while only £6 million is actually allocated to treating childhood obesity, this cost difference clearly demonstrates where the money is being spent. Habits are developed at an early age and that’s where we come in – MoreLife is all about changing behaviours to result in a healthier life – but it’s not about a strict boot camp style. Our weight management and health improvement programmes aim to give people: more confidence, more health, more energy and ultimately, more life and that’s why we think it’s really important to offer our Summer clubs and residential camp for families throughout the UK starting in July. ”

“We know that weight management camps have significant effects. On average campers lose almost a stone and reduce their BMI by up to 2.4 units. The benefits of camp participation are also seen in blood pressure, aerobic fitness, self-esteem and improved sports skills. This research should really empower families to start taking action to change the course of their future and address potential long-term weight issues.”

Worryingly is the fact that over half of parents underestimate the weight of their child, many in denial of the severity of the problem. Unfortunately the cycle doesn’t stop there as obese children have an 85% chance of becoming obese adults.

Tags:  art & craft classes art course crafty creative creative recycling drawing get creative london mums playgroup school holidays summer summer activities summer camps summer holidays
This entry was posted on Friday, June 15th, 2012 at 12:30 pm and is filed under Activities, Blog, Feeding the Family, Fitness & Health, Parenting Skills, Schooling. You can follow any responses to this entry through the RSS 2.0 feed. You can leave a response, or trackback from your own site.