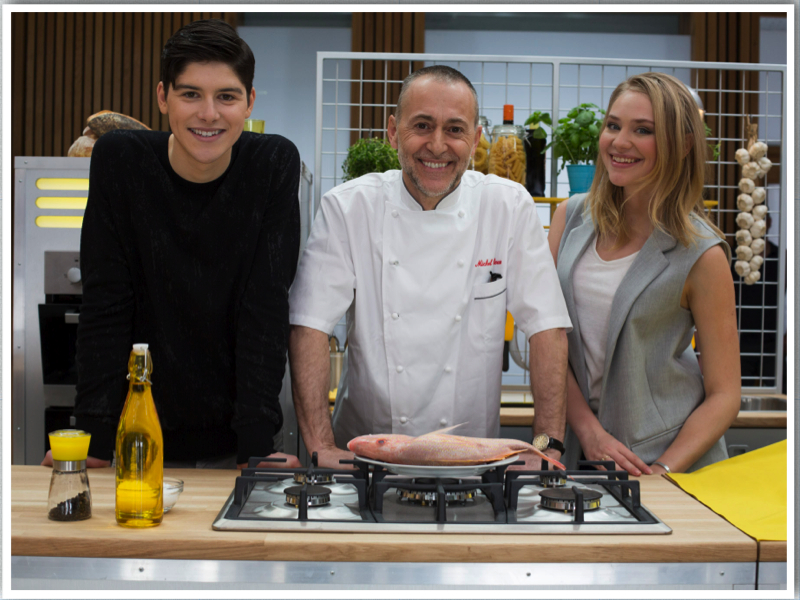 Filming First Class Chefs was absolutely amazing. It was such a joy to work with and film with the children, to mentor them and be like a father figure. To pick out one particular moment wouldn’t be fair, it was so good. I thought that the dynamics of the teams working together was really interesting. For example, with one team of two boys, one team member was very very positive and one was a little bit negative – but they jeer each other up and at the end of the cooking session one of them would say, ‘Oh we’ve nailed it!’ and the other would say ‘No it’s good enough, they’re not going to like it!’. So there was lots of different dynamics in the kitchen, it was just great fun.

There were many really tasty dishes that were cooked on the show but one particular recipe which stays with me is a cod dish. It was covered in pesto and baked in the oven. It was cooked perfectly and was so moist, it was restaurant standard and the seasoning was great too. Also later in the show there was a tiramisu which was very very good. There were lots and lots of different dishes that were really good.

I think to be a professional chef you need dedication and to understand it is hard work. Now whether or not any of our First Class Chefs contestants will come into the catering industry, I don’t know, but there’s certainly potential there. If they don’t become chefs, well one thing is for sure, they will know how to cook and appreciate good healthy food.

Third generation of chefs – yes dad, myself and now my daughter. I think if you look at what makes us tick as Rouxs, its French food and the classics. By that I mean classic French cuisine and also classic technique, but it evolves over the generations. So what my father was cooking is slightly different to what I’m cooking. What my daughter is cooking is obviously different to what I’m cooking. It’s still French, it’s still based on the classics and using classic techniques. But it’s of her era, it’s now and that’s great because it’s still got the Roux trait. You can taste the passion and it’s there to see.

How would I like to be remembered? Gosh, obviously I’m a chef so as a good chef and to have filled and made many happy tummies!

I think we are very lucky in London to have so many great restaurants to choose from. At the moment I live in south London and my favourite place to go and eat is The Manor on Clapham Manor Street. It’s just a fun and buzzy place where you get some great food with a contemporary style.

This entry was posted on Saturday, June 20th, 2015 at 11:00 am and is filed under Recipes. You can follow any responses to this entry through the RSS 2.0 feed. Both comments and pings are currently closed.