Recently I got the opportunity through editor Monica Costa to interview Michelin Star chef Atul Kochhar. I’m a regular contributor to the London Mums magazine and often get invited to review movies, theatres and attend food events and post reviews online. But this one was quite special as I have been a fan of Atul Kochhar and eaten at his various restaurants over the years.

The interview took place at Wimbledon Brewery during a press night for Pub in The Park. We got to try various foods and cocktails including some prepared by Atul Kuchhar. 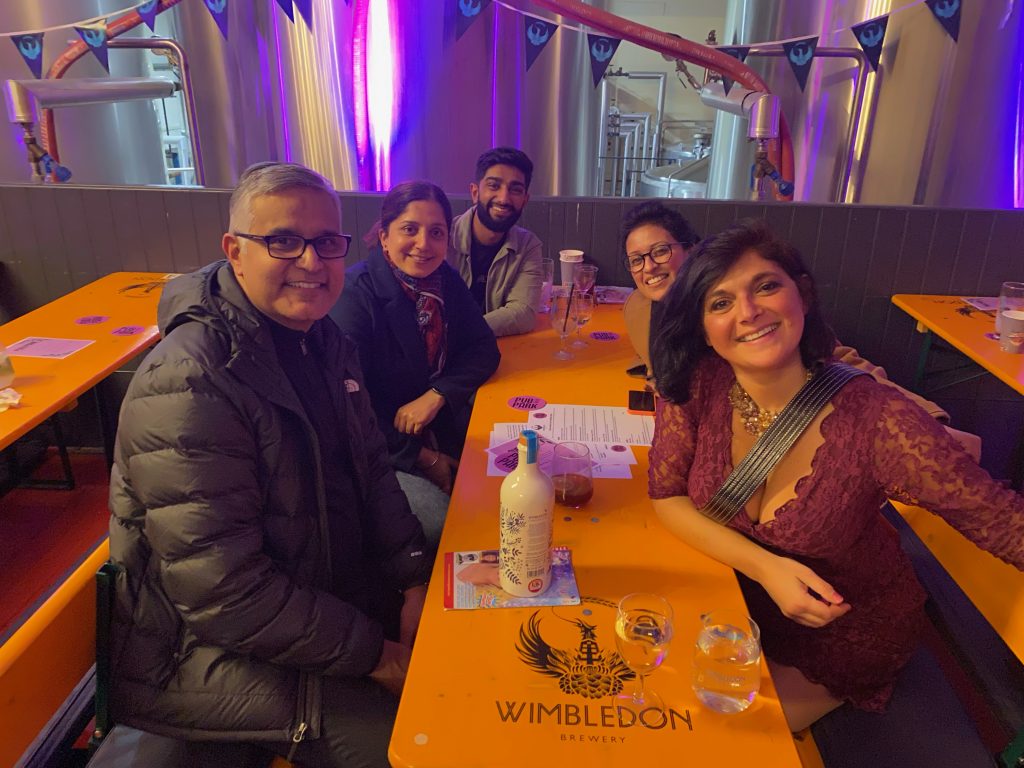 Mr Kochhar is an Indian-born, British-based chef, restaurateur, and television personality. Kochhar was one of the first two Indian chefs to receive a Michelin star, awarded in London in 2001 whilst at Tamarind. He opened his own restaurant Benares, which won him a second Michelin star in 2007. 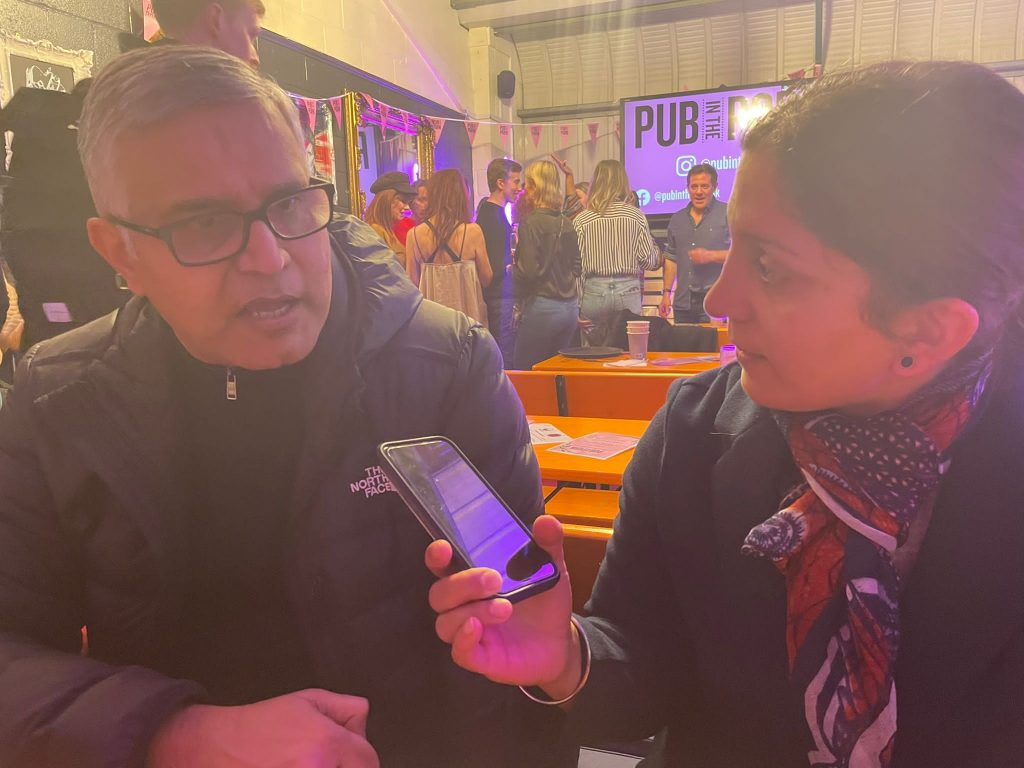 Atul, how is life?

You’ve opened a few restaurants, Kanishka being one next to my hairdressers which I am yet to savour but I haven’t had the opportunity as yet. Are there plans to open any restaurants outside of London and perhaps compete with the curry spots around the UK such as Birmingham, Bradford, Leicester etc

I haven’t thought about it, but you’ve given me an idea. For about 20 years I’ve been working for someone working in restaurants all over the world (since my Michelin star). I worked in restaurants in Mauritius, Maldives, Mumbai, Dubai and one day I questioned myself thinking why am I I’m trying to make the world understand Indian food? I live in the UK, the one country which, outside of India understands Indian food very well. This thought changed my life and I started thinking very differently. I left Benares following a bad split with my business partner because he took my idea away from me. I took that on as a challenge and aimed to open 10. I’ve already opened 9 in the space of 3 years and I’ll keep going.

How tough is it to reach the Michelin Star?

Michelin Star looks for sincerity and consistency. There is no set formula.

Did you know from a young age that you will always be a chef?

I always knew because my grandad was a baker and my father had a catering business so I grew up in a family of cooks, although every other sibling became either a doctor or an engineer. At the age of 16 I said I wanted to be a chef, they all looked down on me and questioned “why”. I stuck to my guns and went to hotel school and not medical school. I did what I wanted to do and I’m very happy. My parents were very open minded and supported me in my decision. My dad’s advice was “you want to wake up happy every day and be excited about your work” and this is still the case today.

The catering business is very tough and demanding…

Yes, but if I was a doctor, it would be even tougher. God saved me from working for the NHS, that would be hell! I love what I do, I feed people and I enjoy my life.

What dish do you miss from your home town and do you replicate it in any of your restaurants?

My mums rajmah (red kidney beans). I’ve tried many times but I’ve failed, I can’t do it, hers is the best.

Who is the better cook – you or your wife?

Definitely my wife (referring to this interview going to print) – social media is a dangerous game, always play safe.

She cooks for me always, when she married me she did know about my achievements as a chef and I did not tell her.

How did you meet?

Our marriage was arranged and we had a traditional Indian wedding. I fell in love with her at first sight and she tells me she managed to fall in love with me. She is a good laugh.

Do you have children and can they cook?

I have two. My daughter is 18 and my son is 16. Both of them cook very well. My father used to tell me “if you can walk you can cook”, he was tough and would say if you can’t cook you have no right to live! That’s what I’ve taught my kids, they had to learn although I’m not sure if they want to follow in my footsteps.

You represent Indian cuisine however which of your London restaurants do you like to visit?

Let me rephrase that – I represent cuisines in India, not Indian cuisine because it’s so different. India was maybe 600 different countries when the British came along and we were brought together for administration purposes. We remained as a union but we still have different agriculture, different clothing and we’re different in appearance. It’s like taking Nordic food and comparing with southern Italian food. Indian can be that different so you cannot clump them together.

Do you eat in Southall?

Yes, many times. There are a lot of dhaba’s (street food) that I like to visit and I’vebeen to Brilliant many times, they’re family friends and I love them. Brilliant is doing brilliant and Dipna Anand is doing amazing, I love her.

What is the inspiration behind your recipes?

Everything – people, seasons, ingredients – everything. It all happens naturally. 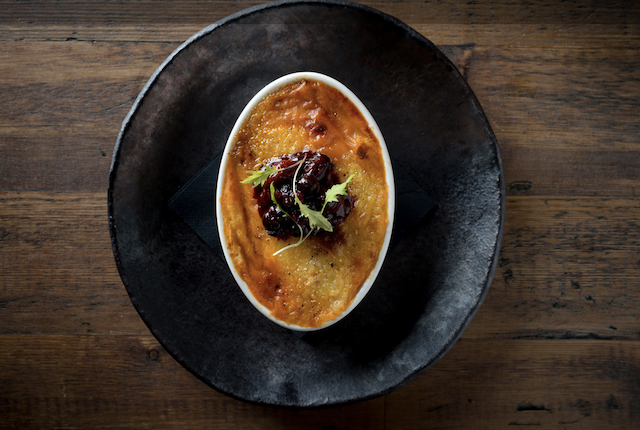 Is your food that you create a true representation of Indian food or is it adjusted for the western palette?

Wherever you go, you adjust your way of living and food is part of the culture. If my food got adjusted, that’s because I got adjusted. When I go back to India and cook, nobody has pointed out that I cook differently so I must be ok, that’s how I see it. The biggest thing that is different in every place is the water. 90% of the food and flavour is water. Every time you pick up a pumpkin and cook it here, there is a significant difference if you were to take the same pumpkin and cook it in India. You cannot undermine the flavour of the water

My wife, my daughter and my son. They’re the ones that keep me right.

Would you let your wife cook in your restaurant?

Technically, she’s the boss and I work for her. She’s 95% shareholder so she owns me.

Which restaurant of yours would you recommend to someone who has never tried your dishes?

Very recently I opened a casual dining space in Wembley called Masalchi. Masalchi is the name for a person in Indian classical who pounds spices. He’s the spice blender so I used that name for the restaurant. I think that restaurant gives the true flavours of India. It’s super casual all day dining and opens at 11am. I am there 2-3 times a day. This is one of my 9 restaurants in London and I have one in Gurgaon, India.

How can you train someone to cook your food?

Over the years I’ve trained many chefs and they’re all successful (some business men) in their own right and I’m proud of their journey. I now oversee the restaurants and develop food.

Do you do any charity work?

Do you watch Bollywood films?

All of them. If you’ve never watched them, start with a film called 100 foot journey – it’s a good movie. My favourite actor is Amitabh Bachan who I’ve met many times. He’s vegetarian and when he ate in my restaurant, Benares for the very first time, I didn’t want to charge him because I’ve been watching his films from a very young age. He was hilarious, he said it’s only me and my friend eating today, the bill is small…I’ll come with 10 people that’s when you don’t have to charge me. He’s very nice.

From 27-29 May, Pub in the Park will transform Wimbledon Park into a food-lovers haven serving a selection of incredible dishes created by some of the most talented chefs in the UK.

Slow-cooked meat takes centre stage with Cue Point, who joined the Pub in the Park family last year, returning due to popular demand with their incredible 16-hour Oak Smoked Brisket Naco; Café Spice Namaste’s Parsee Lamb Kotlet with homemade tomato sauce in a bun and The Hardwick will be bringing the Spanish summer vibes in the form of cripsy Chicken & Chorizo Tortilla Wrap with Spanish la mancha cheese, aioli and patatas bravas.

If meat isn’t your thing, then Holy Carrot will delight visitors with their Sexy Tofu with Aubergine, red pepper and peanut sauce alongside crispy maki tri-colour organic quinoa, heritage vegetables, tempura and spicy mayo.  Cue Point’s incredible Banjan Naco – a smoked and stewed aubergine in a rich garlic and tomato sauce served on fluffy Afghan nan – is not to be missed.

The Wimbledon menu has been unveiled as part of Pub in the Park’s PUB 150. An incredible menu of 150 dishes that will be served by 39 award-winning pubs and restaurants across the Pub in the Park 2022 tour – making it the largest collection of dishes to be served at any festival in the UK this summer!

Across the weekend, celebrity chefs Simon Rimmer, Leyla Kazim and Saturday Kitchen frontman, Matt Tebbutt, will be hosting the festival in Wimbledon.

Tickets now on sale at www.pubintheparkuk.com

This entry was posted on Monday, April 18th, 2022 at 11:31 am and is filed under Recipes. You can follow any responses to this entry through the RSS 2.0 feed. Both comments and pings are currently closed.