London is home to 51 of the country’s best restaurants according to The Sunday Times Food List, published last weekend (3 November 2013). The list of the top 100 restaurants in Britain features more than half in the capital, however only one is ranked in the top ten. 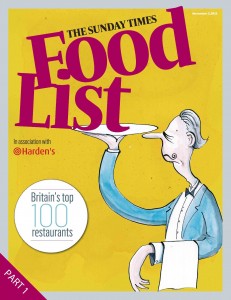 The full results were revealed last Sunday’s list, compiled by The Sunday Times in association with Harden’s, and is based on 80,000 reviews from 9,000 consumers, of which 2,000 are Sunday Times readers.

There are 14 new entries in London this year, including Chinese restaurant HKK in the City, which goes in as the highest ranked addition to the list, and the highest placed Asian restaurant, above its older sibling Hakkasan. There is a re-entry for Willesden Green sushi restaurant Sushi-Say – included in the inaugural Food List in 2010 – which is the cheapest establishment on the entire list, at £43 per head.

Another new entry is Kitchen Table in Fitzrovia, whose head chef James Knappett is one of the youngest to feature on the list, at just 32 years-old. The new entries join established favourites such as The Ledbury and Le Gavroche, which is the most expensive London restaurant on the list at £131 per person, but despite that, it does not even rank in the list’s top five costliest places to dine. London is also home to The Food List’s biggest mover, Nobu, which has jumped from 94th position in 2012 into this year’s top 40.

Mayfair boasts the highest concentration of entries, with 13, while Knightsbridge comes second with seven, Fitzrovia has four, and Chelsea three. French cuisine vies with British cuisine for supremacy, with the Gallic approach counting for 14 of the restaurants featured, closely followed by British cuisine on 11. There are also nine Japanese eateries on the list, while there is just one specialising in Scandinavian cuisine – Texture in Marylebone.

London is home to three of a handful of restaurants on the list with a female head chef: Angela Hartnett’s Murano, the eponymously titled Helene Darroze, and Rose Gray’s River Café.

Editor of The Sunday Times Food List, Karen Robinson, said: “The Food List is essential reading for food lovers. It’s a fantastic achievement for chefs to make it into our top 100, because our scores are based on the opinions of thousands of diners, mostly spending their own money. This makes the Food List an unbiased and definitive guide to the finest restaurants in the country.”

The full top 100, including rankings and overall score will be revealed in The Sunday Times Food List on November 3. The Food List exemplifies The Sunday Times’ rich heritage and commitment to investing in its journalism to continue offering readers of its papers world-class, unique and unrivalled content.

Outlaw’s at the Capital Knightsbridge Fish and Seafood £80

The prices quoted in The Food List are for the typical cost, per person, of a three-course dinner with half a bottle of house wine, coffee, service and VAT.

The Sunday Times Food List is the first in The Incredible Edibles Food Series dedicated to food and dining. The Food List will be followed on 10th Sunday November by The Sunday Times Cheap Eats, the guide to Britain’s top 130 restaurants for less than £50 per head.

The following week will see the release of the first part of The Sunday Times’ Ultimate Cookbook – a pull-out-and-keep, four-part guide to the finest recipes of the celebrity chef era, beginning with Sunday Lunch, and followed by Quick Meals on 24th November, Brunch and Baking on 1st December and Dinner Party on 8th December 2013.

I personally don’t know any of them, what about you? And I thought I knew London. But what do you I know…. I am a busy mum with a very poor social life.

This entry was posted on Thursday, November 7th, 2013 at 2:25 pm and is filed under Feeding the Family. You can follow any responses to this entry through the RSS 2.0 feed. You can leave a response, or trackback from your own site.