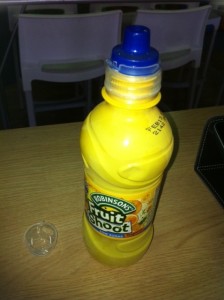 Here is the official notification.

2 July 2012 – Britvic Soft Drinks has taken the decision to extend the product recall on Fruit Shoot to include all Fruit Shoot variants and Fruit Shoot Hydro, featuring the new design ‘magicap’.

Britvic Soft Drinks has taken the decision to extend the product recall on Fruit Shoot to include all Fruit Shoot variants and Fruit Shoot Hydro, featuring the new design ‘magicap’.

As part of our ongoing testing and analysis, we identified this morning that the issue of damaged caps, which has occurred on a small number of green caps, has also occurred on blue caps used on low sugar variants and Hydro.

As the damaged caps may become fully or partially detached, we recognise that this is a packaging safety issue and believe that a full consumer recall of Fruit Shoot and Hydro is the appropriate course of action.

The packs that we are recalling are as follows:

· All Fruit Shoot (regular and low sugar, single and multipacks)

As before our logistics team will facilitate the additional uplift from your warehouses and we would ask you to also remove stock from shelf.

We will be running advertisements in national newspapers tomorrow. We have asked consumers to return affected packs to the retailers, in line with standard procedures. A recall poster is also available for display in store.

We apologise for the further inconvenience that this will cause and will continue to update you on the situation.

This entry was posted on Tuesday, July 3rd, 2012 at 1:53 pm and is filed under Baby & Toddlers, Blog, Feeding the Family. You can follow any responses to this entry through the RSS 2.0 feed. You can leave a response, or trackback from your own site.