Does red meat have a role in young children’s diets?

This study on read meat might sound controversial to vegetarians but makes a compelling reading to me. It has been compiled by CHS Ruxton, PhD, RD, Freelance Dietitian and E Derbyshire, PhD, Senior Lecturer in Human Nutrition, Manchester Metropolitan University. 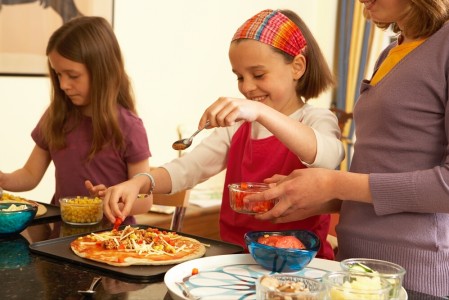 Lean red meat provides a range of important nutrients which are known to support normal growth and development in infants and children. UK dietary surveys report that some groups of children have low intakes of the nutrients commonly found in red meat, e.g. vitamin A, vitamin D, iron, magnesium, zinc, selenium and potassium, while poor iron and vitamin D status are common issues in childhood. The type of iron found in red meat – haem iron – is particularly bioavailable, and there is emerging evidence that meat-sourced nutrients, e.g. iron, zinc and iodine, may help to support cognitive function and immune health.

In recent years, there has been controversy about red meat, prompting suggestions that people of all ages should limit their consumption. This article will look at the role of red meat in the diets of infants and children, and consider its role in helping to meet dietary recommendations and in supporting normal growth and development.

Red meat includes beef, veal, pork and lamb and can be further split into fresh meat (including minced and frozen) and processed meat (e.g. ham, bacon, salami, ready meals, tinned meat and meat pies). Meat contains high biological value protein and micronutrients that would be expected to support normal health in childhood . As Table One shows, meat can claim to be a ‘source’ or ‘rich source’ of certain nutrients as defined by current food labelling regulations . It is also richer in several micronutrients compared with other sources of animal protein. 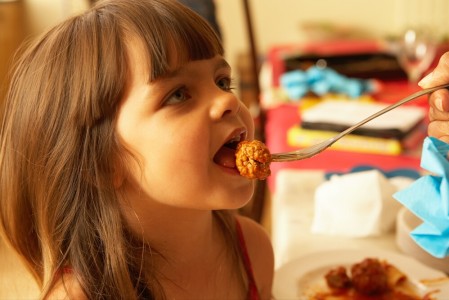 Improvements in farming practices over several decades have significantly reduced the energy and saturated content of red meat so that, on average, 100g of lean beef now contains 129 kcal and 1.7g of saturated fat, while the respective figures for pork and lamb are 123kcal/1.4g and 153kcal/3.5g3. Veal can make a legal claim to be ‘low’ in fat (<3g/100g) and saturated fat (<1.5g/100g), while pork is ‘low’ in saturated fat. Typically, UK grass fed beef and lamb contain useful amounts of long-chain omega-3 fatty acids . Although lower than omega-3s in oily fish, red meat can offer an alternative dietary source for those who prefer not to eat fish. An Australian study estimated that grass fed beef and lamb contributed 28% of total dietary long-chain omega-3 . Nutritional challenges

Compared with teenagers, young children have reasonably balanced diets , although levels of overweight and obesity remain high at around 50% . However, nutritional gaps can arise, despite parents’ best efforts as a result of illness, food refusal and faddy eating.

There are few recent surveys of infants and pre-school children, although one is underway looking at children aged 4-18 months . The Southampton Women’s Survey, a prospective cohort study, estimated dietary intakes in 1600 infants using a food frequency questionnaire and, in a sub-group of 50, a 4-day weighed record. Mean dietary intakes in infants aged 6 months were similar to Dietary Reference Values. However, in the infants aged 12 months, mean intakes of iron, zinc and vitamin D were low when measured by the more accurate weighed method .

A similar finding was reported by the Bristol Avon Longitudinal Study of Parents and Children (ALSPAC), which noted that the diets of 18-month infants were low in iron, zinc and vitamin D . The National Diet and Nutrition Survey (NDNS) of pre-school children (1½ to 4½ years) reported that energy intakes were below the Estimated Average Requirement (EAR), while mean intakes of vitamins A, D and iron failed to meet Reference Nutrient Intakes (RNI). The blood results from this survey also revealed iron deficiency in 12% of under twos, and a low iron status in around 30% of older children. The proportion of iron deficient children in areas of socioeconomic deprivation can range from 25-40% .

The latest NDNS examined dietary intakes in children aged 1½ to 18 years using 4-day diet diaries8. For younger children, mean intakes were in excess of EAR for energy and RNI for protein and micronutrients. However, a different picture was seen when individual intakes were compared with the Lower Reference Nutrient Intake (LRNI; the level below which deficiencies may occur). Applying this to 4-10 year olds, 3% boys and 5% girls had inadequate vitamin A intakes, while 4% of boys and 10% of girls had inadequate zinc intakes. In girls, 1-3% fell below the LRNI for iron, calcium, magnesium, selenium and iodine.

There is currently no vitamin D RNI for children above 3 years so the European Recommended Daily Allowance (RDA) of 5 mcg is a useful reference. Compared with this, average intakes in 4-10 year olds (1.9mcg) were only 38% of the RDA. Vitamin D insufficiency is widespread amongst UK children , and there is a high risk of deficiency in ethnic minority children.

In the ALSPAC study , young children’s intakes of iron and zinc were below the RNI. Boys tended to have higher intakes of iron and vitamin B1 and consumed more breakfast cereals, full fat milk and meat/meat products than girls. Similarly, in the Low Income NDNS boys had higher iron intakes and were more likely than girls to eat burgers and kebabs (34% vs. 23%).

A South London study found that 73% and 68% of pre-adolescents from different ethnic backgrounds failed to meet RNIs for zinc and potassium, while intakes of calcium, potassium, B12 and vitamin D were lower than intakes reported in the 1997 NDNS. In the Child Heart and Health Study , South Asian children aged 9-10 years were found to have some of the highest energy intakes but the lowest intakes of vitamin D, calcium and iron. 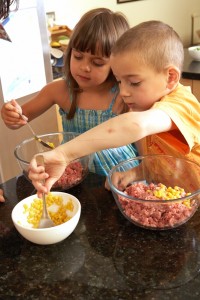 According to the latest NDNS8, average daily red meat intakes were 28g in 1½-3 year olds and 45g in 4-10 year olds. In younger children, red meat contributed 2-6% of daily intakes of fat, saturated fat, trans fats and sodium while, in 4-10 year olds, the respective contribution was 5-9%. This suggests that red meat provides only a modest amount of these nutrients.

The contribution of food groups to micronutrients was not reported, however, in 2-10 year olds participating in the low income NDNS, meat and meat products provided 15% of daily iron, 12% of magnesium, 12% of potassium, 29% of zinc, 7% of iodine, 10% vitamin A, 6-11% of B vitamins, and 29% of vitamin D. The large contribution to vitamin D intakes is notable given current concerns about vitamin D status. In addition, the type of vitamin D present in meat is especially bioactive .

Meat-based nutrients are important for growth and development. For example, vitamin A is required for eye function and immune health, zinc for growth, iron and iodine for brain neurone development , . A lack of micronutrients in the first two years of life, in particular iodine and iron, may limit cognitive development in ways that cannot later be compensated by an adequate diet . Once weaned, infants may lack vitamin B12, iron and zinc if diets are dominated by cereal/plant-based foods and there is insufficient variety.

In addition, parental concerns about obesity can encourage the use of low fat foods which may restrict fat-soluble vitamins . Red meats are a good source of vitamins and minerals and should be introduced into weaning diets once infants reach 6 months of age . Red meat is also a key promoter of non-haem iron bioavailability and so can enhance overall iron absorption .

Studies suggest that including meat in weaning diets may relate to better health outcomes. In the Southampton Women’s Survey, infant diets were grouped into three patterns and associated with outcomes at age 4 years. Infants whose weaning diets included a high consumption of fruit, vegetables, cooked meat and fish had a significantly lower risk of obesity at age four years and a higher IQ and better memory performance .

A Danish intervention trial tested the effect of two different levels of meat in the diets of 8-month old infants. Over the 2-month trial, haemoglobin concentration declined but in the infants offered 27g of meat per day, the mean decline was small (-0.6 g/L) versus infants offered 10g per day (-4.9 g/L). In the NDNS, pre-school children who included red meat in their diet tended to have a better iron status , while in older children meat consumption and haem iron intake were associated with a better iron status . Delaying the introduction of meat in infanthood could lead to feeding difficulties. In ALSPAC, children who were introduced late to chewy solids scored lower on the more positive ‘family foods’ and ‘health conscious’ dietary patterns .

Expert bodies recommend including red meat in the diet of infants and children. The World Health Organisation advises that “young children should receive a variety of foods including meat, poultry, fish or eggs as often as possible ”, while the Department of Health suggests including meat once infants are established on baby rice and fruit/vegetable purees . In general, the Department of Health says that “red meat is a good source of iron, and meat is also one of the main sources of vitamin B12 ”.

As iron requirements are highest during the period of rapid growth from 6 months to 3 years and red meat is a major source of haem iron for all age groups27, it is important to introduce red meat into the early weaning diet and to continue providing meat as part of a healthy, balanced diet throughout childhood. Suitable meals for infants and toddlers include minced beef, lamb or pork with soft cooked vegetables and potato, or finger foods such as cubed ham and grilled sausages.

School-aged children may enjoy stir fried pork, baked potato with mild chilli con carne, or lamb casserole. Healthy meat meals tend to be grilled or baked and are accompanied by one or two portions of vegetables.

Red meat is high in protein and rich in vitamins and minerals which support growth and development. Dietary surveys report that infants and children can lack sufficient amounts of the nutrients found in meat, e.g. iron, zinc and vitamin D, with potential negative health implications. While contributing only modestly to fat and sodium intakes, red meat can make a significant contribution to intakes of key nutrients in childhood and should be included within a healthy, balanced diet from weaning onwards.

This review was funded by the Meat Advisory Panel which is supported by an unrestricted grant from the British Pork Executive (BPEX) and the English Beef and Lamb Executive (EBLEX) divisions of the Agriculture and Horticulture Development Board (AHDB). The views expressed in this paper are those of the authors alone and AHDB had no role in selecting papers or writing the review.

Tags:  feed the family feeding the family
This entry was posted on Monday, November 5th, 2012 at 9:00 am and is filed under Blog, Feeding the Family, Fitness & Health. You can follow any responses to this entry through the RSS 2.0 feed. You can leave a response, or trackback from your own site.