The dining table is only the fifth most popular place to eat breakfast, a study revealed yesterday. Despite being the traditional place to start your day, the dining table was beaten by our desks, the sofa and even the commute to work. 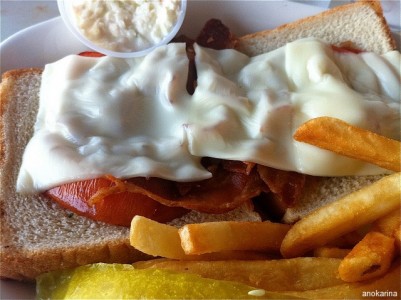 Researchers found a third of Brits say that they never sit down and eat breakfast at a table and those that do are unlikely to do it at any point other than at the weekend.

Instead the study revealed that people were likely to squeeze in brekkie while driving or even while getting dressed or showered.

The research of 2000 Brits was commissioned by Greggs the bakers which has seen its bacon roll rise to the top of its sandwich best seller list since nationwide launch in 2010.

Dr. David Holmes, a leading UK psychologist, who is working on research into Brits’ breakfast habits with Greggs, said: “In our workaholic time-pressured 2012 lives not only are people unable to contemplate formal breakfast at the dining table but now cannot even pause on the kitchen worktop for the most important meal of the day.

“Gone are the days of the early family gathering, now the urge to hit the desk at work before they can take five minutes to enjoy their meal, means Brits now contemplate their carry-out breakfast alongside their keyboard and mouse. In this way we feel that breakfast is on work-time and we don’t sit agitated in our kitchens, nervously looking at the clock contemplating indigestion.”

Time emerged as the main factor for Brits who said they were too busy rushing around of a morning to take the time and sit down and eat properly.

The average Brit woke up just 43 minutes before they left the house and nearly half say they regularly have to skip breakfast as they run out of time.

Despite this two thirds reported that they performed better at work if they had a good breakfast and thought it was an important way to start their day.

One in ten said they preferred to eat at their desk as they reasoned they were getting paid to eat breakfast that way while a fifth said they liked to eat while watching breakfast TV.

A quarter said that there wasn’t any space for them to eat breakfast at the dining table because it was covered in clutter such as post, paperwork and their home computer.

Others said they had piles of washing, rubbish and kid’s homework on their table.

One in six has even gone so far as to get rid of their dining room table because they never have the time to use it properly.

A spokesman from Greggs said: “The great British high street offers a fantastic range of breakfast options which has made grabbing breakfast on the go a much more appealing prospect than ever before.

“Gone are the years of just having the option of a bacon or sausage sandwich, now there are much more continental and healthy options available such as croissants and granola or porridge. Traditional favourites still sell well because sometimes nothing will satisfy your breakfast hunger more than a delicious bacon sandwich with plenty of red or brown sauce.”

MOST POPULAR PLACES FOR BRITS TO EAT BREAKFAST

4. On my feet while getting dressed

5. At the dining room table

Greggs is undertaking further research to understand the changing face of breakfast. To take part in the research visit the Greggs Facebook page

Tags:  breakfast feed the family feeding the family recipe - carnival-recipe - recipes
This entry was posted on Wednesday, February 22nd, 2012 at 1:17 pm and is filed under Blog, Feeding the Family. You can follow any responses to this entry through the RSS 2.0 feed. You can leave a response, or trackback from your own site.