You know that episode of Friends where Monica, Rachel and Phoebe spend an afternoon hanging out wearing wedding dresses? Monica is in one yet to even be worn by its owner, the awful Emily* who is about to become Ross’ third wife. 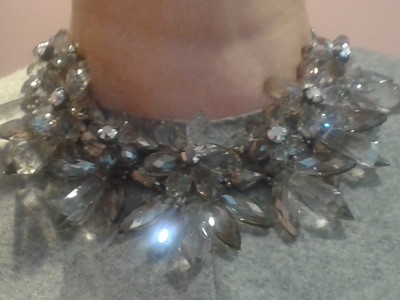 Later on when they are forced to come back down to earth and dress more appropriately, Monica ponders how she loves being dressed as a bride and how great it would be to have a job which meant wearing a wedding dress every day. I’m quite happy to admit this strikes a chord. I’m in favour of wearing dressy dresses as often as possible. As one did when small; my son often goes to nursery as Superman and it’s fine. What’s the point in keeping something you love in a cupboard where nobody – including you – can see it?

I have a fabulous friend who quite without fanfare wore an evening dress with wellies and a parka for a romantic tryst in a park in broad daylight. Oh the romance of it! Why don’t people do this more often? Life is short and jeans are boring. My sister-in-law turned up to spectate at the London Triathlon in sequinned stilettos one year. I also have a colleague who regularly wears sequins to her work in the I.T. department.
To clarify, I don’t actually prance about in wedding gowns but I’m all for it and never say never, right? If you prefer casual dressing that’s fine, but personally I’d rather be overdressed any day of the week. Except maybe on the beach. 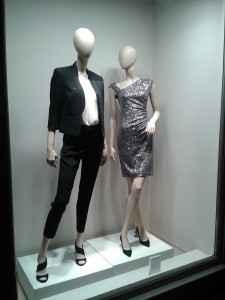 The relaxed and comfy looking Isabel Marant vibe is the antithesis to the sparkly red carpet kind of dressing up that goes hand in hand with this time of year. So it was with some reluctance that I found myself perusing the H&M website at 9am sharp on launch day of the now sold out Isabel Marant collection and then hanging on, eighties style, for fifteen minutes while my landline bleeped an engaged tone in my ear. I couldn’t help myself, the minute I heard my friend Sophie had bagged a pair of THOSE boots**, I had to have something. Anything. Such is media hype. I’m ashamed to find I’m not immune despite suggesting exactly that on a recent LinkedIn rant about designer collaborations. I didn’t even get the boots (damn my small but apparently popular size 4 feet) so I plumped for the tea dress. My younger self was hankering after the red waxy trousers but again, I was swayed because the Knitwear King once happened to mention he liked tea dresses and pin curls (although not on himself you understand). I had visions of myself all demure with a hint of Parisienne c/o Madame Marant a snip at only £69.99.

We’ll see, the dress has yet to arrive and really I wanted the sloppy sexy boots so 1940s lady who lunches might not cut it for Christmas 2013.***

This festive season it’s a challenge getting away from black for occasion wear. So if like me you’re on an Any Colour As Long As It’s Not Black Diet, then the raft of Tuxedo style jumpsuits and suits is a bit of a set-back. Don’t get me wrong, I love this particular look and I’m always interested in a new take on the tried and tested evening dress but it’s so dull when everyone wears black. So now I’m on a mission to find non-black showstopper frocks. Navy is the colour of the season but as I am on a self-imposed navy binge for the first time since my schooldays, it doesn’t feel glamorous enough for the evening.

Red is a perennial colour and there are always dresses to be found in it. However this year the red of choice is a warm orangey-red and it just doesn’t work for my ‘Summer’ complexion. That sounds like complete toss doesn’t it, but it’s true – my friend Hannah who like me is a ‘Summer’ has a lovely silk Whistles number hanging in her wardrobe with the tags still attached because it simply doesn’t do anything for her English rose colouring.

There is quite a lot of choice in the metallics arena out there but it all looks so cheap that I’m thinking the only way to do silver or gold is as a statement necklace or earrings. Those babies are everywhere at the moment and while they can be bought for next to nothing, some of them look amazing. I have commented on at least two magnificent necklaces recently only to be told they were from Primark, MIss Selfridge or New Look. Seriously, it’s all in the styling.

Also, and I’ll be mocked for this by a certain die-hard Marks and Spencer fan I know, but if M&S get one thing right (I’ve never thought much of their pants) it’s costume jewellery; luxurious looking and sparkly.

My final word is on Reiss which is proving to be a winner for glamorous dresses, as long as you’re not dead-set on full length, which frankly is tricky to find anywhere at all this season. This high street brand has really upped its game in recent years and now their womenswear tailoring is on a par with the likes of Dolce and Gabbana – a great cut for curvy figures and currently offering a good choice of colours. While I’m at it, get yourself on the Reiss mailing list because their bi-annual sample sale is well worth the journey to South Molton Street, wherever you may live. I have never yet come away empty-handed and most items are reduced by at least 60%. Evening dresses don’t tend to date as easily as other pieces so it’s a good idea to snap them up when you see them rather than leaving it until December when you should really be Christmas shopping. Or doing the washing up in someone else’s wedding gown.

*Love how dreadful people in American telly are invariably British and in this case called Emily.
**Said boots were selling on eBay for three times the H&M price within an hour of the launch

***Dress has now arrived. It doesn’t suit me. Any offers?

I am a style consultant and personal shopper although at the moment I am most likely to be found counting strides (in my heels) between my home and local schools to determine where I might be able to get my son a place next year.
In Battersea where I live, a toddler, pram and/or pregnant bump is THE accessory to be seen with. However there are also lovely shops and many an overstuffed wardrobe – and that’s where I get my kicks. I love what I do and I love being a single mum!

Tags:  Christmas dresses fashion H7M Isabel Marant jewellery M&S Miss Selfridge New Look Primark Reiss shopping style Zara
This entry was posted on Monday, December 16th, 2013 at 9:00 am and is filed under Fashion & Beauty. You can follow any responses to this entry through the RSS 2.0 feed. You can leave a response, or trackback from your own site.