We often receive touching letters from mums and mumpreneurs. It is amazing and this letter is one of those that really touched me.
This letter is from Katherine Mount. I hope you love it as much as I do. 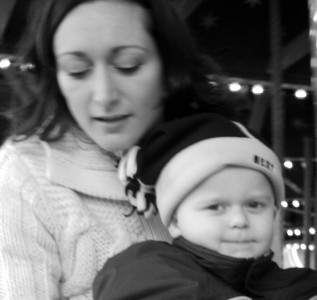 In 2002 my son Ethan was born. He was diagnosed profoundly deaf and my world fell apart.

90% of deaf children are born into hearing families, the majority of which, just like mine, have little or no experience of deafness. This confuses our expectations for our children and we have to re-evaluate our visions of their future when it comes to very fundamental things like communication and schooling. Many of us, myself included, also mistakenly re-evaluate other areas of our lives.

As a singer I had always imagined filling my child’s life with music, singing to them, teaching them to express themselves musically, sharing my passion. When Ethan was born instead I just stopped. I stopped playing music in the house (partly because I was told we should have a quiet environment to encourage listening skills, but also because it was too painful to think he couldn’t hear it and I felt horribly selfish), and I stopped singing altogether. I walked out on the choir I had been with and I stopped performing. I never sang to Ethan as a baby.

It took me five years to realise that he could love music, and love it just as much as me. You see what I failed to appreciate in my initial devastation was that disability does not have to mean ‘lacking’ anything, you are simply experiencing life in a different way. And let’s face it all our kids are different anyway.

Ethan joined a choir himself – the amazing Kaos Signing Choir who have recently performed at the Opening Ceremony of the Olympics as well as welcoming the Paralympians at St Pancras Station, and singing/signing in St Paul’s Cathedral for the service for the opening of the Paralympics. I am SO proud of him. He feels music in ways that I will never understand, he is full of it. It has become as much a driving force in his life as it always has been in mine. He has rhythm and a freedom of expression that you’d be hard pushed to find belonging to a hearing child. Every time I watch him I am blown away by his ability.

If only I could go back and tell that desperate, naive and grieving new mother all the things I now know, but then that would have been too easy! As it turns out I put on a brave face, stayed positive and fought for my boy every step of the way, and it has been the most extraordinary journey.

Ethan’s Song was written for me by Helen Goldwyn, a good friend and fellow singer, who along with Christina Fry and me, make up the trio Ladies GoDiva. After Ethan came to watch an LGD performance one night, Helen wrote this beautiful song. As a singer she was able to understand and capture the raw emotion and curiosity I feel when I think about Ethan’s love of music. There is a video on youtube, and the song is available to buy on iTunes. My hope is that Ethan’s Song can reach out to people and spread a positive message about disability. Ethan and I are in such a good place now and I want to share that with you all.

Ethan recently performed the National Anthem with Kaos sign language choir as part of the celebrated Olympic Opening Ceremony which captured the heart and hopes of the world. Although he doesn’t hear it he has found music in his own way and it has become as much a passion for him as it is for his mother.

Performing is obviously in Ethan’s blood: having worked for many years as an actress (including appearing recently opposite Sean Dingwall and Lyndsey Marshall in British horror flick The Forgotten) Katherine gradually reconnected with her singing voice. This led to the formation of Ladies GoDiva, a cabaret trio with whom she has performed to great success in the UK and abroad. She also sang live on BBC Radio 3 this August to promote A Quiet Life, which is a multi-sensory deaf accessible opera that will soon be featured on BBC’s See Hear. It had its debut at the Tete a Tete Festival and is being further developed for a US tour.

More relevantly to Ethan, she has recorded a song, written especially for her, which has been arranged by Stephen Bentley-Klein (currently musical director of Taming of The Shrew at the Globe Theatre, performing/touring with Paolo Nutini and Deep Purple, and himself the father of a deaf child). Ethan’s song is about Katherine’s struggle to come to terms with her and Ethan’s different experiences of music but is ultimately a touching and uplifting piece performed with genuine emotion by a talented singer with tonal purity. The song has been designed to raise deaf awareness and spread a positive message about disability.

Tags:  london mumpreneurs mumpreneur's testimonial mumpreneurs
This entry was posted on Sunday, September 23rd, 2012 at 9:16 am and is filed under Baby & Toddlers, Blog, Mumpreneurs & Mums at work, Parenting Skills. You can follow any responses to this entry through the RSS 2.0 feed. You can leave a response, or trackback from your own site.