There is something quite sweet about seeing a youngster with their shoes on the wrong feet – but when the child is insisting that they are on the correct feet and refuses to change them over – it stops being cute! 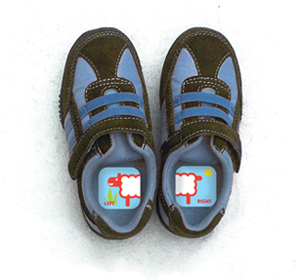 When graphic and website designer Ellen Lichtman’s daughter was three years old, she provided her mum with an “Aha!” moment that would, four years later, become a unique product that most parents will wonder how they ever lived without. Shoezooz Educational Shoe Stickers are a fun, easy way for children to differentiate their left shoe from their right so they can put their shoes on correctly, by themselves. 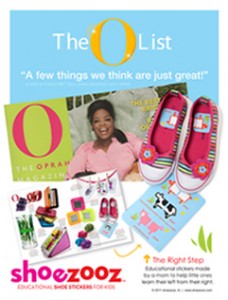 The idea for the Shoe Stickers came to Lichtman when her then three-year-old daughter appeared with her shoes on the wrong feet, yet again. Lichtman was immediately inspired with an idea to create a sticker that would adhere to the inside heels of kid’s shoes, with an image split in half that could only be put back together when the shoes were placed correctly. “It’s a simple idea and a simple product, but it still took several years of development to make it a reality,” says Lichtman. However, as she developed Shoezooz, Lichtman also noticed that the product was accomplishing more than she had originally intended. “They not only saved time for parents and helped kids feel more self-confident and self- sufficient but also became great tools for occupational therapists and are ideal for kids with visual learning styles, including those on the autism spectrum.” 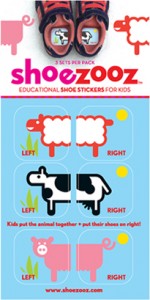 A package of Shoezooz includes three sets of durable, vinyl, moisture-proof stickers that adhere to the inside heel of the left and right shoes. Printed on the pairs of stickers is an adorable, colourful image of a friendly animal split in half (the head and front of the body on the left sticker and the tail and back of the body on the right sticker). By simply matching up the animal halves, shoes are put on the correct feet. The simple and engaging illustrations are fun and attractive to both children and adults, and best of all, no reading is required which makes Shoezooz perfect for toddlers.

Pookie and Peach – have once again searched high and low and discovered a real gem – the Shoezooz range offer a selection of friendly folk (as shoe stickers) – who will help teach your little ones the actual shoe for the correct foot… and with 3 sets of stickers per pack – you’ll be spoilt for choice!

And let’s face it – Oprah is never, ever, wrong…

This entry was posted on Thursday, December 1st, 2011 at 11:31 am and is filed under Baby & Toddlers, Blog, Tested & Recommended. You can follow any responses to this entry through the RSS 2.0 feed. You can leave a response, or trackback from your own site.