A picture speaks a thousand words and this is one of my favourites. A shame it wasn’t around in 1999 when my 4 year old son was being constantly scolded, chastised and persecuted by his teachers. I’ve felt for a long time that children in the UK start school far too early and when this is compounded by being an August born child – the odds for a smooth ride in the early years, dwindle to virtually zero. 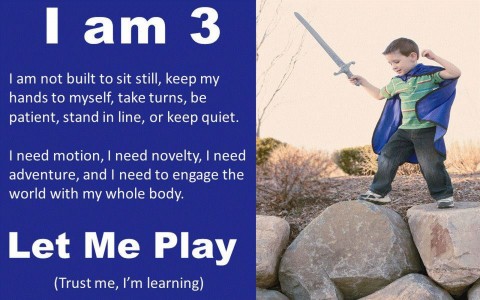 In recent years there has been somewhat of a debate over the rising incidence, diagnosis or occurrence of Learning Difficulties in children.

Is it that we’re more informed and aware of these difficulties and so are quicker to label our children as learning impaired, where before they would simply have been called lazy, careless or stupid? Or is it down to a profound change in lifestyles brought about by the advent of television and other electronic diversions?

Television, Nintendo, Play Station, Wii and the Computer are all sedentary activities. Whilst they all have their place in learning and development, the fundamental loss has been that in movement and play based activities.

Other baby boomers like me would have come home from school and within minutes of eating a (relatively healthy) snack of milk and biscuits, would have been out again to play on the street, in the park, on their roller skates, bikes and scooters. As parents we are prone to spending hundreds of pounds sending our kids to private tutors to help with handwriting, maths, reading and concentration. Yet playing can have the same positive benefits on academic learning as well as physical development. For instance:

• Tennis – a person hitting a ball with a racquet with the aim of placing it over the net in such a position that the opposing player cannot return the shot. Similarly, the key skills gained from this activity are balance, hand-eye coordination, foot-eye coordination (for strategic positioning), speed of visual processing (transferred to sensory processing for academic learning), focus, concentration, stamina, strategy and tactics. Not a bad bunch of skills to have in an examination situation for example!

You may argue that what does balance have to do with academic learning? Research in the last 30 years (Frank Belgau) has shown that a weakness in balance can impact severely on those key brain processing areas that are critically involved in attention, memory, vision, auditory processing, speech, sequencing of information and reading.

Agreed that formal learning is an essential part of life that children need to embrace in order to maximise their opportunities and experience within that environment. It is however equally important to recognize that there are other, different ways to learn. Particularly in the early years, sending your child out to play in the garden will help their development far more than sending him/her to a tutor to learn literacy or numeracy.

It’s summer (supposedly!). So next time you begrudge them 30 minutes in the garden, letting off some steam and playing, take a moment to think about what it is actually that they are doing and how they’re going to benefit. Then make the comparison with them sitting down at a table for 30 minutes poe-faced and resentful being forced to do maths and English. Seriously no comparison !

Tags:  children development learning play schooling Stress therapy tuition tutors
This entry was posted on Thursday, October 4th, 2012 at 9:42 am and is filed under Baby & Toddlers, Blog, Childcare, Parenting Skills, Schooling, Special Kids. You can follow any responses to this entry through the RSS 2.0 feed. You can leave a response, or trackback from your own site.