My name is Laura and I am a mother of two sweet little girls Niamh and Annie.
I would like to share with you my story as I am hoping it could help you, if you experience the same or similar problems with your kids.

My daughter Niamh is nearly three and she hasn’t been a good sleeper since birth, because she has allergies, asthma, hay fever, she is intolerant to dairy, so she has always had something that kept her awake. We were on our knees waking up to 20 times a night! When our second daughter Annie was born (now 1), we had to move each night between the two children, without any possibility of having sleep ourselves. 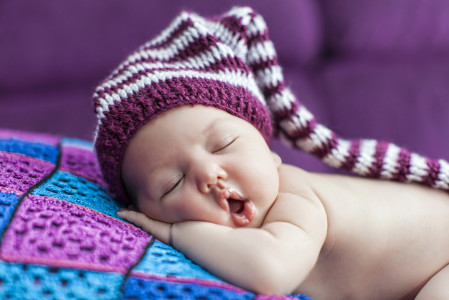 Niamh has always been anxious. We used to use white noise when she was a baby, that used to get her to sleep because it apparently sounds like what they would hear in the womb. As she got older it stopped settling her and because of her allergies she would be awake a lot keeping us up. It got worse progressively over the last 3 or 4 months. When babies don’t sleep, it’s exhausting trying to get through the day with them when you’re not sleeping at night either. With my partner James, we were literally only getting 1 or 2 hours sleep at night.

Niamh was screaming the house down. She woke us all up, there was no way just one of us could stay awake with her, it was all of us, she would even wake the baby up. The health professionals were saying it could be night terrors that was causing her to wake up screaming.

Currently I am a full time mum whilst also studying a part time psychology degree. It’s really tough for me. James works away 2 to 3 nights a week, so I have to deal with it all on my own. During the night trying to get 2 children back to sleep, you can’t split yourself in two. With 2 children crying, screaming, trying to get one asleep before the other wakes up, it is hard. There have been moments when all three of us have just sat on the bed sobbing our hearts out, asking myself how can I cope anymore? There were times when I thought I could just go and spend a couple of days on my own somewhere and regenerate. I wished someone would just take them for me when they were sleeping and when I came back it would all be fine. It was really, really strenuous and at times I did feel like at the end of my tether.

I did say to James that I really needed some support here, we desperately needed help! I don’t think we were managing very well. I thought we needed some outside help to deal with this because it’s just ridiculous.

The health visitor came around to help. She suggested slow retreat which was rubbing her tummy and gradually saying nite, nite, leaving a bit more space and then leaving the room. That wasn’t too much trouble but it didn’t really work because Niamh screamed, not just crying but screaming, jumping up and down and kicking. She would run to her baby gate and bang on it and bang the door into the baby gate trying to get us out of bed.

I felt guilty. I felt like a bad mum, because I couldn’t get my children to sleep. A lot of people mentioned the cry out method and maybe I should have tried that before. There is some web site that says to just let your baby cry. But that wasn’t my way and I didn’t feel like it was a way I wanted to go. It does work for some people, I am not saying its a bad thing. We tried gradual retreat where baby gets used to you moving further away from them. It didn’t work for us, as she doesn’t have a problem going to sleep. It is more waking during the night. We could sit in the room for 2 hours trying to settle her, but that’s not sustainable as much as I would like to sit with her. She is my little girl but I need sleep too, to be able to look after her during the day. I was actually scared about driving the car, because I didn’t feel safe as I was so tired.

My friend Nicola came to help me. She saw how exhausted I was. We met at soft play one day. I broke down bursting into tears. Seeing me like that and how upset I was about it all, she gave me a big hug and said she would help me. Nicola recommended I play Levine’s Alphamusic.

I got My Little Sea shells track. The results outstood our expectations. We now put this music on all night on a loop and if she briefly wakes, she goes back to sleep immediately without fuss. She has a broken sleep cycle and instead of going back to sleep she was getting up, screaming, banging the door. Levine’s music is now helping her to go back to sleep without us having to calm her down. Both me and James are now sleeping soundly. I can face the day with new energy and can now look after my little ones without having to worry that I am too exhausted.

This music is also helping during play time. While the craft work, on the kitchen table, normally girls are fighting and pulling, there is a lot of jealousy that goes on. I just put this special brainwave music on and Niamh is a lot calmer whilst they are cutting and playing with each other.

I would like to thank John for composing this piece. I can’t tell you how much a difference this has made in our lives. I’ll tell everyone that will listen. I would love other parents to benefit from this music as well.

A mother of two little girls.

This entry was posted on Wednesday, July 15th, 2015 at 1:16 pm and is filed under Baby & Toddlers. You can follow any responses to this entry through the RSS 2.0 feed. Both comments and pings are currently closed.