Here is my latest review for the Kids Club at the London Mums magazine about the new Disney film Big Hero 6 out in your local cinema at the end of January 2015!! 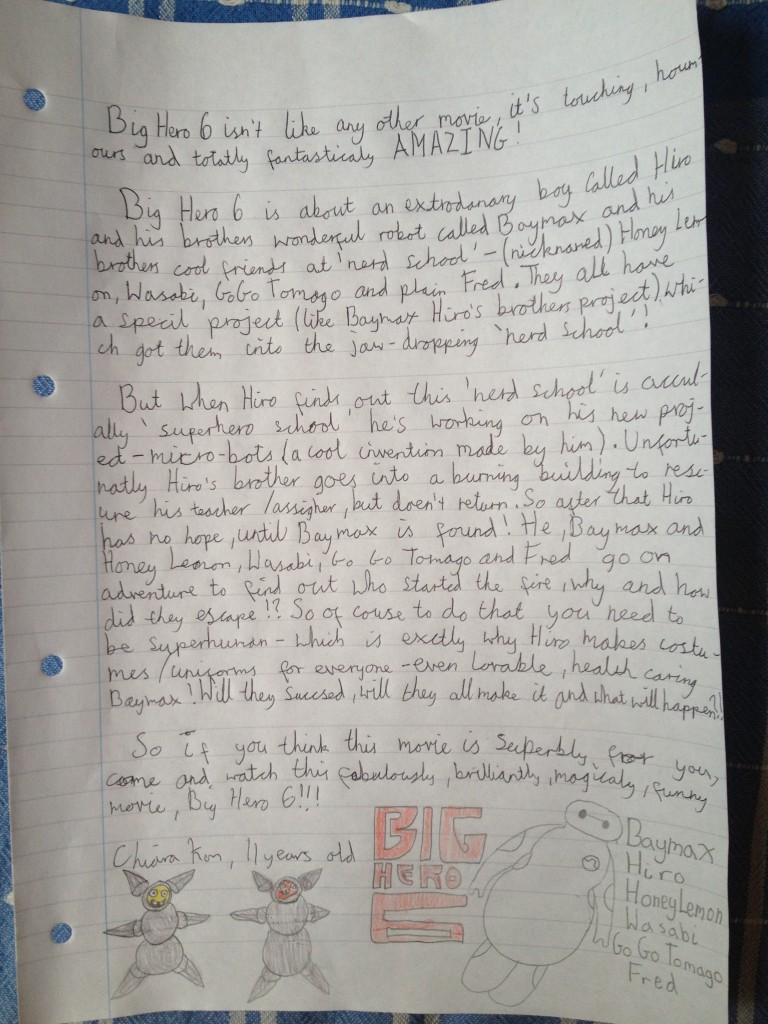 This is what my mum Carolina thinks of the movie:

Big Hero 6 is not your usual after Christmas princess fable but more of a comic type of story with two main characters, Hiro, a 14 years old child and Baymax, a 10ft tall inflatable robot. The latter is at the centre of the story as it represents what is left of Hiro’s big brother, a new robotic creation and also a way to help Hiro and his new friends to defy the villains in this story. The film is action packed and up to date with today’s generation and also seems to empower those youngsters that are seen as nerds and show them in a different light…a more positive one!

It is rare for us to see how certain groups of people, the ‘nerds’, are normal people just like everyone else. Hardly ever we categorise them as heroes and I think that here Disney aims to show us that anyone can become a superhero…. even if followed by a sad event ( in this case the death of Hiro’s brother).

This film will capture kids imagination on another level and possibly take their minds away from the daily consoles/interactive games and give them some ideas on what to do after school/weekends such as using their imagination to create new ideas and therefore to use their minds for better purposes. It also underlines the importance of going to school and continuing education as it reminds us the power of being educated and all the things we may achieve by learning more and more every day!

Big Hero 6 is packed with imagination and creations and will definitely appeal to the 7+ public but I don’t think it will be appropriate to the under 7s due to its content, some rude humour and some ‘violent’ scenes that may be too much for a toddler to undertake.

This entry was posted on Monday, January 19th, 2015 at 11:00 am and is filed under Kids Club. You can follow any responses to this entry through the RSS 2.0 feed. Both comments and pings are currently closed.