Watch my vlog review on YouTube. I loved HOTEL TRANSYLVANIA so I am glad Drac’s Pack is Back with this new Monster Comedy. In HOTEL TRANSYLVANIA 2 it is hilarious to see how keen granddad Dracula is to turn his half human grandson into a vampire. The DVD is out now. 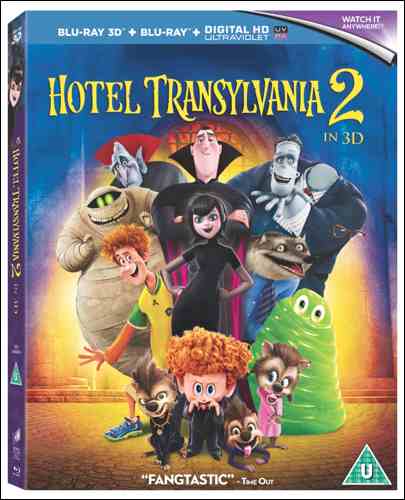 The Hotel Transylvania sequel reunites ‘Drac’s Pack’ of loveable characters, led by “Vampa” Drac (Adam Sandler, Grown-Ups) as they try to put Mavis (Selena Gomez, Spring Breakers) and Johnny’s (Andy Samberg, TV’s “Brooklyn Nine-Nine”) son Dennis through a “monster-in-training” boot camp to bring out his vampire side. But little do they know that Drac’s grumpy and very old, old, old school dad Vlad (comedy legend Mel Brooks) is about to pay the family a visit. And when Vlad finds out that his great-grandson is not a pure blood and humans are now welcome at Hotel Transylvania, it doesn’t take long for things to get batty!

The Blu-ray and DVD are full of extras, including Fifth Harmony’s “I’m in Love With a Monster” music video, a character sketch gallery, an inside look at how the filmmakers and animators created Hotel Transylvania 2 and director commentary with Genndy Tartakovsky. Exclusive to the Blu-ray are interactive featurettes on how to throw the ultimate monster party and draw your favourite characters from the film, a special Monster Scary-oke, which gives viewers the chance to sing along with Dennisovitch to spooky versions of three classic songs, must-see deleted scenes and much more.

This entry was posted on Saturday, February 20th, 2016 at 11:04 am and is filed under Kids Club. You can follow any responses to this entry through the RSS 2.0 feed. Both comments and pings are currently closed.