To celebrate Shakespeare Week as part of my Shakespeare Research Project for English in year 7 in secondary school I was recently asked to do an interview with William Shakespeare so I had to go back in time to do it. I headed to Stratford Upon Avon during half term and did just that. This is the result of my chat with one of the world’s best talents. 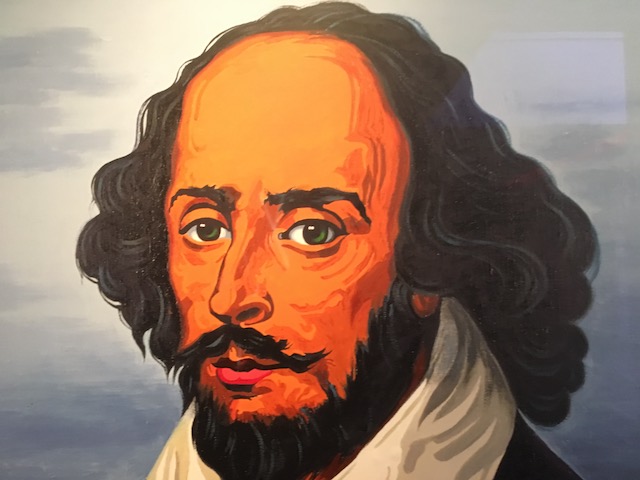 The time travel machine has brought me to Stratford Upon Avon in 1599 where William Shakespeare now lives in his New House residence. 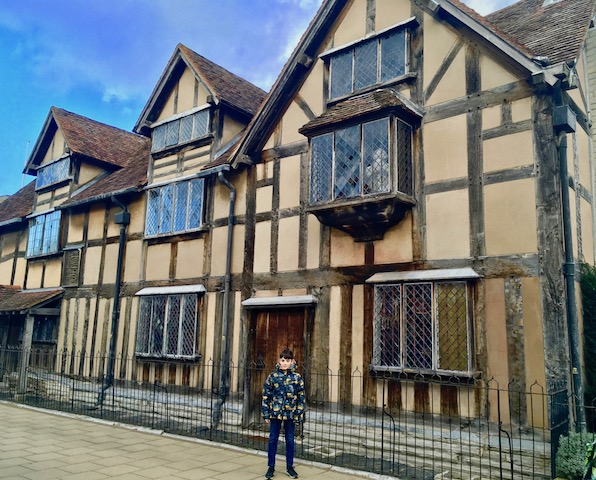 1) Q: Where do you find the inspiration for your plays? Have the Italian poets Dante, Petrarca and Boccaccio inspired you as well?
William Shakespeare: Chaucer and his Canterbury Tales certainly influenced me, and of course the three great poets from Italy who also inspired Chaucer. Cymbeline, All’s Well That Ends Well, Two Gentlemen of Verona, and Winters Tale, for example, were inspired by The Decameron which Boccaccio wrote in 1353.

2) Q: Who supported you in the early days when you started writing?
William Shakespeare: With writing alone it was hard to become rich during my time under Elizabeth I’s reign. But writing for theatre was better as people paid for their tickets to go and see comedies or tragedies and it was a much better way to make money writing. The Queen became one of my Patrons which meant that she paid me to write theatre plays so I was one of the lucky playwrights. Throughout my life I was greatly indebted to the patronage and support of royal and noble personages; not just Queen Elizabeth but also King James I. They both loved the drama. My Queen studied the ancient classical period and used her influence in the progress of the English drama. I have always been very loyal to the Queen and also mentioned her in various plays. In A Midsummer-Night’s Dream, I mention Her Majesty as “a fair vestal throned by the west” and I produced this play for a special Court performance.

3) Q: Who has influenced your style the most and why?
William Shakespeare: During my school years in the Elizabethan era, our days were about 11 hours long. So I had many hours to study ancient Latin texts from a very young age. I studied poetry and prose which inspired my writing. I also went to Church every week so that also influenced my work and references to religion appear in many of my plays. From 1592 I started working as an actor in London which was a melting pot for many different cultures, and that certainly inspired me too. In my plays I have created characters from different cultures and personalities that I met. During Queen Elizabeth’s reign there was a lot of talk of witchcraft. People were scared of that and that influenced my writing of Macbeth. I also admired the work of Geoffrey Chaucer – and indirectly also the Italian Boccaccio’ Decameron that inspired him.

4) Q: Do you prefer writing tragedies or comedies and why?
William Shakespeare: I have written 18 comedies and 10 tragedies, so you can take a guess. Well, actually I consider myself a witty man and this is why I would say that I prefer comedies to tragedies.

5) Q: You have invented 1700 words and expressions that in the 21st century, where I come from, are widely used every day. What are your favourite ones?
William Shakespeare: I am very flattered to hear that. Some of my favourite include:
• All that glitters is not gold (The Merchant of Venice)
• All’s well that ends well
• Break the ice (The Taming of the Shrew)
• Catch a cold (Cymbeline; claimed but seems unlikely, seems to refer to bad weather)
• Cold comfort (The Taming of the Shrew / King John)
• Crack of doom (Macbeth)
• Fight till the last gasp (I Henry VI)
• For goodness’ sake (Henry VIII)
• Good riddance (Troilus and Cressida)
• Jealousy is the green-eyed monster (Othello)
• Knock knock! Who’s there? (Macbeth)
• Laugh yourself into stitches (Twelfth Night)
• Love is blind (Merchant of Venice)
• Much Ado About Nothing
• [What] a piece of work [is man] (Hamlet)
• Seen better days (As You Like It? Timon of Athens?)
• Too much of a good thing (As You Like It)
• bandit (II Henry VI, actually “bandetto”, the first attestation in English of a familiar Italian word for people “banned”, i.e., outlaws)
• cold-blooded (King John; first use to mean “lack of emotion”)

6) Q: How would you describe your style of writing?
William Shakespeare: I used a metrical pattern consisting of lines of unrhymed blank verse. My plays were composed using blank verse, although there are passages in all the plays that are different and are composed of other forms of poetry and simple prose. I often used metaphors. To end many scenes in my plays (like Macbeth) I used a rhyming couplet to create suspense.
My idea of language came from two main sources. The first source is Latin which was the language of educated people which was mixing with the Anglo-Saxon “English” of the common people. I created new words in English from the Latin words. For example, the word “incarnadine” meaning “the colour of blood”, red,. The second source of linguistic ideas came from my fellow Elizabethan and Jacobean playwrights and poets such as Marlowe, Jonson, Middleton. And, of course, I took much from the everyday life around me, in taverns, at the theatre, in church.

7) Q: You are one of the playwrights who managed to show human conflicts in theatres. Could you explain my readers from the 21st century what you meant with the famous expression from your play Hamlet ‘to be or not to be, that is the question’?
William Shakespeare: A lot of the conflicts I wrote about come from my personal experience. During the reign of Elizabeth (the First), it was quite tough to earn a living and the laws were very strict. You could not simply express your feelings so you had to keep everything inside yourself. I showed this in Hamlet, the Danish Prince, who had a big dilemma hidden in his heart but could not reveal it. He was torn between being loyal to his mother but at the same time act with justice. In Romeo and Juliet I also showed human conflicts. These young people were in love but could not tell that to anybody because they belonged to two different families who hated each other.

8) Q: I can tell you that all your work has been enjoyed by lots of generations over the centuries. Which plays do you consider your best ones and why?
William Shakespeare: My favourite work is what I wrote between 1590 and 1595, including Richard III, The Comedy of Errors, Romeo and Juliet, The Merchant of Venice, Hamlet, Macbeth, Othello and A Midsummer Night’s Dream. These plays were written in my mature years when I already had experience with theatre work in London. My absolute favourite ones are “Romeo and Juliet” and “A Midsummer Night’s Dream” because I think they show the best of my poetic style. 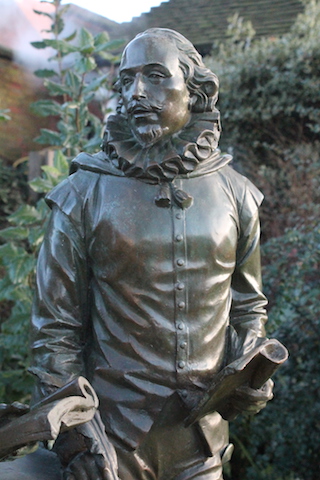 9) Q: Two of your most famous tragedies are based in Italy (Verona and Venice). Why did you choose two cities in Italy as the locations for these plays? By doing so you have made them very famous all over the world.
William Shakespeare: I loved Italy, I read a lot about its beauty and literature from Dante to Boccaccio. In England, there were very strict laws and many of my comedies and tragedies would have been censored if I mentioned real people names’ and facts so I chose to set some of my plays in Italy so I could say what I wanted even if indirectly. Verona and Venice are beautiful cities with lots of dramatic and inspiring stories.

10) Q: I have a final question about the Globe Theatre in London, which is still very popular in the 21st century and still shows all your work in the same way you produced your plays there. How much were you involved in the running of the theatre?
William Shakespeare: During the first years of Elizabeth’s reign, the English playing companies used inns, inn yards, college halls and private houses for their performances. In 1576 actor-manager James Burbage built the Theatre in Shoreditch, the first purpose-built playhouse in London. I joined the resident troupe there in the 1580s. But then there was a dispute in 1596 and the company took a plot near the Rose, a rival theatre in Southwark, demolished the Theatre and carried its timbers over the river. To cover the cost of the new playhouse, members of the company were offered shares in the building. I also bought a share in the Globe. Early this year (1599) the theatre was up and running presenting many of my plays. I am pleased to hear that people still enjoy watching my plays there. I cared a lot about that theatre.

This entry was posted on Monday, March 12th, 2018 at 2:22 pm and is filed under Kids Club. You can follow any responses to this entry through the RSS 2.0 feed. Both comments and pings are currently closed.