Wolf won’t bite! Or will he . . . ? Three of the best known characters in fairy tale history have a new lesson to learn in Emily Gravett’s winsome picture book, Wolf Won’t Bite! now out in paperback. My 5 year old son and I are never disappointed by Emily Gravett’s stories. This one in particular is beautifully illustrated and is brilliant storytelling. 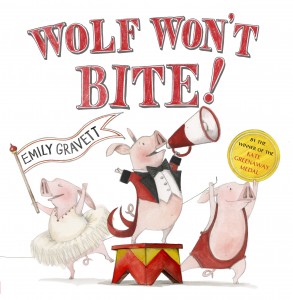 For your chance to win a copy of this amazing book, answer the simple question below in our dedicated competition page https://londonmumsmagazine.com/competition-area. The question is: ‘What’s the name of ‘Wolf won’t bite’ publisher?’ The deadline to enter is 30th March 2012.

Take your seat in the front row and watch in wonder as three cheeky little circus pigs make a wild wolf jump through hoops (literally), endure feats of astounding derring-do, and even withstand perilous games of dress-up! Safe in the thought that ‘wolf won’t bite’ they even put their heads between his jaws . . . but can you push wolf too far?

Sure to strike a chord with anyone who has both a pet and a young child, this is a very funny and playful story with a snappy ending!

Winner of the Kate Greenaway Medal, Nestle Children’s Book Prize Bronze Award, Booktrust Early Prize and numerous other book prizes, Emily Gravett is an author/illustrator of exceptional talent and skill. She has written and illustrated the following titles for Macmillan: Wolves, Meerkat Mail, Orange Pear Apple Bear, Monkey and Me, Little Mouse’s Big Book of Fears, The Odd Egg, Spells, Blue Chameleon, The Rabbit Problem and Again! Emily lives in Brighton with her partner, their daughter and Otto and Edie, their dogs.

Tags:  books books' reviews children's books' reviews Competition competitions freebies
This entry was posted on Tuesday, February 21st, 2012 at 2:36 pm and is filed under Blog, Books, Competitions. You can follow any responses to this entry through the RSS 2.0 feed. You can leave a response, or trackback from your own site.