Win1 of 5 copies of the Doctor Who Character Encyclopedia 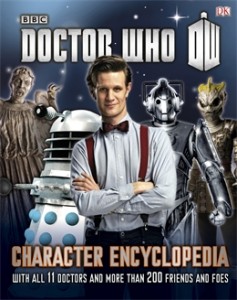 Step aboard the TARDIS, adjust your bowtie and grab your sonic screwdriver: the good Doctor has arrived to sweep you away on his time-travelling adventures with the Doctor Who Character Encyclopedia.

Over 200 full-page character profiles introduce the show’s most well-known, best-loved and weirdest characters, with data files full of fascinating information on each of the eleven Doctors, his loyal companions and unforgettable foes. Simple and colourful design highlights the stunning images and on-set stills that show each character at their finest, from the faithful K-9 to the eye-widening Weeping Angels.

Great for Whovians of all ages, the Doctor Who Character Encyclopedia transforms you into the ultimate companion just in time for the Doctor’s 50th anniversary (but 1200th birthday). Geronimo!

For your chance to win one of these amazing books, answer the simple question below in our dedicated competition page (USE ONLY THE DEDICATED PAGE & DO NOT SEND MESSAGES OR DO NOT POST MESSAGES ON THE WEBSITE OR ON THIS PAGE AS THE ENTRY WON’T BE VALID – YOU WON’T BE NOTIFIED OF THE WRONG ENTRY) https://londonmumsmagazine.com/competition-area. The question is: ‘What’s the name of the current leading actor playing Doctor Who?’ The deadline to enter is 20th April 2013.

Tags:  books' reviews competitions family movies win
This entry was posted on Thursday, March 21st, 2013 at 9:00 am and is filed under Competitions. You can follow any responses to this entry through the RSS 2.0 feed. You can leave a response, or trackback from your own site.