To celebrate the release of animated movie TWO BY TWO, featuring the voice of BBC Radio 2 and The One Show’s Chris Evans, on DVD and Digital Download, London Mums are giving away great prizes, courtesy of Entertainment One:

3 RUNNER-UPs PRIZES: 3 Two by Two merchandise packs including a hooded towel, a swimming bag, a beach ball, stickers and activity sheets (as per image). 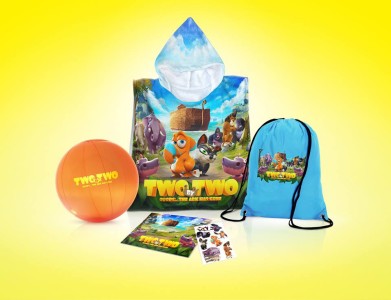 It’s the end of the world and a huge flood is coming, large enough to wipe out every creature on the planet!

With warnings of a flood sweeping the land, the animals travel to the safety of the Ark. Animals are boarding two by two – Lions, Gorillas, Hippos, Nestrians…. Wait a minute, Nestrians?! Unluckily for father Dave and son Finny, Nestrians aren’t allowed on to the ark! Sneaking on board with a bit of imagination, a spot of luck and the involuntary help of a couple of ferocious Grymps, Hazel and her daughter Leah, they think they’re safe… until the two curious kids fall off the Ark.

From the animators of The Gruffalo’s Child and Cloudy With a Chance of Meatballs, TWO BY TWO tells the story of how new friends Finny and Leah struggle to survive the rising waters and hungry predators, as they attempt to reach the top of a mountain to find their parents. Through good times and bad, the pair must learn to work together and brave the elements in their quest to find higher ground – with the help of some unlikely friends! 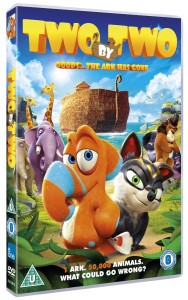 As Finny and Leah continue their journey, their parents, on board the Ark, must set aside their differences and hatch a plan to make it back in time to rescue their kids!

Inspired by the story of Noah’s Ark, TWO BY TWO is a heart-warming and hilarious animated feature that’s fun for all the family, and is now available to own on DVD and Digital Download.

Here is the trailer:

For your chance to win one of the prizes, you just need to write in the competition form below this post the answer to the question ‘where is Woburn Safari Park based?’ Competition closes at midnight on 24th September 2015.

This entry was posted on Saturday, August 29th, 2015 at 11:00 am and is filed under Competitions. You can follow any responses to this entry through the RSS 2.0 feed. Both comments and pings are currently closed.