With the biggest footballing tournament in the world on the horizon, Topps has launched its Match Attax England Trading Card Game, featuring the England team in the very latest official kit!

We’ve teamed up with Topps again to offer one lucky reader the chance to really get into the action with a complete set of player cards for the England team alongside a Match Attax England Starter Pack. What’s more, 10 runners up will also get a Starter Pack. 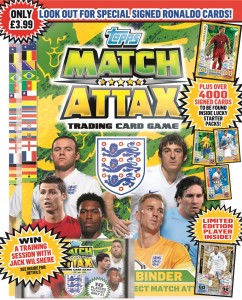 To be in with a chance of winning, all you have to do is to tell us in the competition box below what is your favourite football player of all times. The deadline to enter this competition is 13th June 2014.

The collection showcases the entire England Squad as well as Brazil-bound superstars from all over the globe, with the likes of Rooney, Messi, Iniesta and Neymar just waiting to be found. Plus there are signed cards from Ronaldo, Gerrard, Wilshere and Giroud to be discovered in lucky Starter Packs, too.
The Topps Match Attax England Trading Card Game is available in all good retailers, newsagents and independent stores across England now. Starter Packs are £3.99. Packets of 10 cards are £1 each. Collector Tins containing 50 cards including a Limited Edition are £5.99; Deluxe Starter Packs are also £5.99. Multipacks containing five packets (50 cards) and a Limited Edition cost £5.

This entry was posted on Tuesday, May 20th, 2014 at 12:10 pm and is filed under Competitions. You can follow any responses to this entry through the RSS 2.0 feed. Both comments and pings are currently closed.